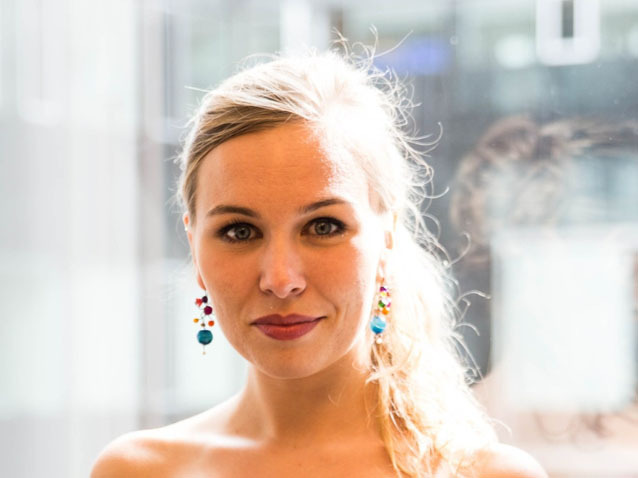 Within only three months Elsa Dreisig was awarded in 2015 both the Second Prize at the Queen Sonja International Music Wettbewerb in Oslo and the First female Prize as well as the Audience's Prize at the "Neue Stimmen" competition of the Bertelsmann Foundation in Gütersloh. She has also just won the "Prix jeune soliste 2015 des radios francophones publiques" ("Prize young soloist 2015 of the French speaking public radios"). These major achievements make her rise as a new star of the vocal art heaven.

Elsa Dreisig is French and Danish. She was still a child and already very keen to sing. She entered the Maîtrises (choir’s schools) of the Opéra royal de Wallonie and of the Opéra national de Lyon. She studied singing at the Conservatoire National Supérieur de Musique in Paris (class of Valérie Guillorit) and at the Hochschule in Leipzig (Regina Werner).

Together with the pianist Lucie Sansen she deepened her knowledge of the Lied and the Mélodie being advised by Alexander Schmalcz, Jeff Cohen and Anne Le Bozec. She also studied the German vocal repertoire with the Baritone Stephan Genz, the Italian vocal repertoire with Peter Berne and the German operetta with Regina Werner. In 2014, once again together with Lucie Stansen, she took part in the “Résidence  Schubert” lead by Matthias Goerne and Markus Hinterhäuser at the Académie d’Aix-en-Provence. She also attended the Masterclass ''Schubert and Strauss'' by Dietrich Henschel and Manuel Lang in the frame of the « Neue Stimmen » - Foundation as well as the Lied Academy in Heidelberg with Thomas Hampson and Thomas Quasthoff.

In 2012 she was awarded both the jury and the audience prizes at the “Des Mots et des Notes” competition, dedicated to the French repertoire. In 2014 she was awarded the first prize at the “Ton und Erklärung” competition (organized by the Club der Deutschen Wirschaft) accompanied by the MDR Symphony Orchestra. She was also awarded the audience prize, the prize of the young audience and the prize for the most promising artist at the 2015 Clermont-Ferrand competition.

In 2013/14 Elsa Dreisig made her stage debut in Der Wildschütz by Lortzing the Music Hochschule Leipzig, performed then Semiramide by Hasse at the Hochschule Leipzig and on tour in Graz. In 2014/15 she performed Les Parapluies de Cherbourg (Jenny) at the Théâtre du Châtelet with Natalie Dessay and Laurent Naouri under the baton of Michel Legrand. She also sang Madame de Folleville in Il viaggio a Reims by Rossini in Royaumont.

From 2014/15 on Elsa Dreisig is a member of the Opera Studio of the Staatsoper Berlin under the artistic direction of Daniel Barenboim. Her plans in Berlin this season are Pamina et Papagena in Die Zauberflöte, the princess in Le chat botté by César Cui and Signora Angiolieri in Mario und der Zauberer by Stephen Oliver. Further plans include Rosina in Il Barbiere di Siviglia at the Clermont-Ferrand Opera and on tour throughout France.

Elsa Dreisig is a member of two musical ensembles: the Franco-American contemporary music and art collective “Ensemble 101” (artistic director: Mike Solomon) and the “Ensemble 4D” (4 Dreisig) in Denmark with her mother, her aunt and her cousin, all sopranos.

She recently took part in the prestigious gala concert of the German AIDS-Foundation at the Deutsche Oper Berlin under the baton of Donald Runnicles.

She has given recitals at the Gasteig Phiharmony in Munich, at the Bronnbach monastery in Werthein and at the Konzerthaus Berlin.

Some Stirring Performances in Die Zauberflöte at the Royal Opera House, Covent Garden

Sam Smith
Published on the 04 of November, 2019
See all columns