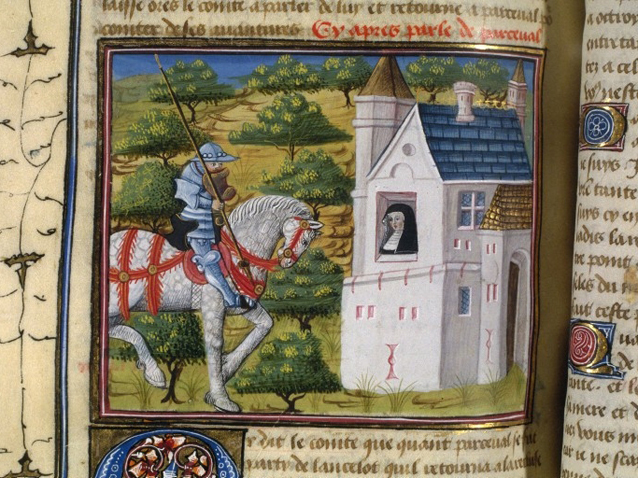 Wagner’s last masterpiece, Parsifal, this “sacred scenic festival,” with the same name given it by its composer, is similar to a Medieval epic, a blend of metaphysical dreams and esoteric battles with constant spiritual, Christian and Buddhist references, particularly through the choice of renunciation and compassion as a tool for redemption.  Despite the libretto’s complexity, audiences are swept away by the majestic and powerful music of this work, with its multiple motifs contained within the impressive prelude, just as they fully relish the grandiose choirs at the Grail Supper at the end of the first act, and the fascinating and poetic harmony at the end of this testamentary work.

Protected by his mother throughout his childhood from any contact with the world, to keep him pure and innocent, Parsifal, having despite this discovered evil and sin, manages after a long, epic interior journey to discover the Grail, the fullness of life and the quietude of the soul.

In the kingdom of Montsalvat, the chaste Knights of the Grail and their king, Amfortas (baritone-bass), watch over the sacred relics of the Christ, the spear that pierced him and the Holy Grail, the chalice in which his blood was collected on the Cross. Klingsor (bass), a fallen knight of Montsalvat and master of an enchanted estate, has stolen the spear and plunged it into the side of Priest-King Amfortas, inflicting an eternal wound that only a pure and compassionate being can deliver him from. Then comes young Parsifal (tenor), spontaneous and ignorant of everything, especially of evil, believed by the wise Gurnemanz (bass), the senior Knight, to be the long-awaited Saviour. However, the young man’s lack of enthusiasm during the celebration of the Grail causes him to be dismissed.

In his enchanted garden where flower girls seduce and abandon the Knights of the Grail, Klingsor enjoins the diabolical Kundry (soprano), a disturbing character because she is also the servant and messenger of the Grail, to charm Parsifal. She gives him a voluptuous kiss, which Parsifal pushes away, understanding that temptation was the cause of Amfortas’s wound, and forgiveness its only remedy. Kundry, having laughed at Christ on his Way of the Cross, has been condemned like a wandering Jew to lose himself forever unless he is redeemed by Parsifal’s compassion. In the face of his rejection, she curses him, reducing him to wander far from Montsalvat. Parsifal triumphs over Klingsor who has been called to the rescue by Kundry, recovers the spear and flees.

Years later, on Good Friday, in a clearing near Montsalvat, at the end of his initiatory path, Parsifal arrives in the guise of a black knight, finally returning the Holy Spear. Amfortas now desires only death; he neglects the rite of the chalice, and the knights, deprived of their divine comfort, fade away.  Titurel (bass), Amfortas’s father, has also succumbed. In an act of penitence, like the prostitute in the Gospel, Kundry washes and anoints Parsifal’s feet with a perfume before drying them with her hair.  Gurnemanz, having become an old hermit, like an allegory of a Biblical character, baptises Parsifal and gives him the balm, making him once the Priest-King of Montsalvat. His first official act is to baptise Kundry, who falls into the sleep of death and forgiveness. He then approaches Amfortas and rests the spear on the wound, which heals over. Finally, he announces that the Grail will henceforth be displayed forever for all to see. Later, he will have a son, Lohengrin. But that’s another story!