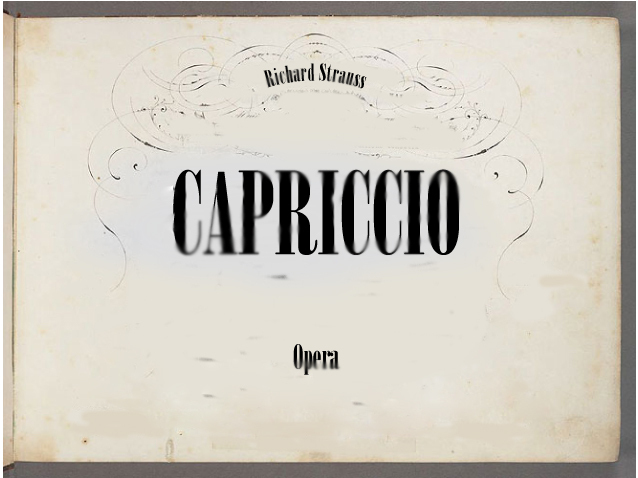 In Munich in 1942, Richard Strauss composed “Capriccio,” a “musical conversation.” The libretto is closely inspired by “First Music and Then Words” composed by Salieri. It took up the quarrel waged in the 18th century by fans of the Italian composer Puccini, who advocated that words should reign supreme in opera, against the defenders of Gluck, for whom the music was pre-eminent. Out of this dry subject matter, Strauss created a magnificent work, crammed with musical and literary references, full of charm and intelligence, great lyricism and a startling vivacity. Elegance and virtuosity, humour and sensitivity are scattered throughout the text and score of this masterpiece; Strauss put a great deal of himself and his own philosophical ponderings into it.  In this case, it is impossible to choose between the respective merits of words and melody.

In a château near Paris around 1775, a Countess hesitates between two suitors: this is expressed in the sort of passionate exchanges that keep opera fans debating the relative merits of words and music in opera.

In the 18th century, a coterie of artists is rehearsing a performance arranged for the birthday of the lovely young Countess Madeleine (soprano), who was recently widowed. Poet Olivier (baritone) and musician Flamand (tenor) are both in love with the Countess. In their battle to win Madeleine’s favours, each of them prepares a gift for her: the young musician gives her a string sextet, and the poet an ode.  This love rivalry is matched with an artistic divergence over the primacy of music or words in the opera. La Roche the theatre director (bass) tries in vain to bring them together. The Count (baritone), Madeleine’s brother, acknowledges his preference for words and his attraction for the great actress Clairon (mezzo), who is a real heartbreaker. They both perform the final love scene written by Olivier, the high point of the sonnet. Olivier, finding himself alone with Madeleine, professes his love for her. Then it is Flamand’s turn: he plays the sonnet set to music, which he has just composed, on the piano. The poet then becomes angry, but he is interrupted by La Roche, who demands he attend the rehearsals. Flamand takes advantage of his absence to confess to the countess his passion for her; he asks her to choose between them. She puts off answering until the following day. She confirms to her brother that she is unable to decide, while the friendly meeting continues with a dance performance. When La Roche announces the outline of the performance to come, a quarrel breaks out regarding the respective virtues of poetry, music and theatre. Flamand and Olivier attack La Roche who fiercely defends his programme in a brilliant statement of his case. The countess tries to reconcile the parties by proposing that they join together to work on the same opera. The Count then suggests that the day’s events should be the subject.  When evening comes, the guests take their leave, and the servants comment on the events, but the matter is still not decided; Madeleine, humming Olivier’s sonnet with Flamand’s melody, puts off her decision to the next day, convinced that choosing between Music and Poetry is impossible. Better to sleep on it, as they say.

Alain Duault
Published on the 25 of January, 2016
See all columns