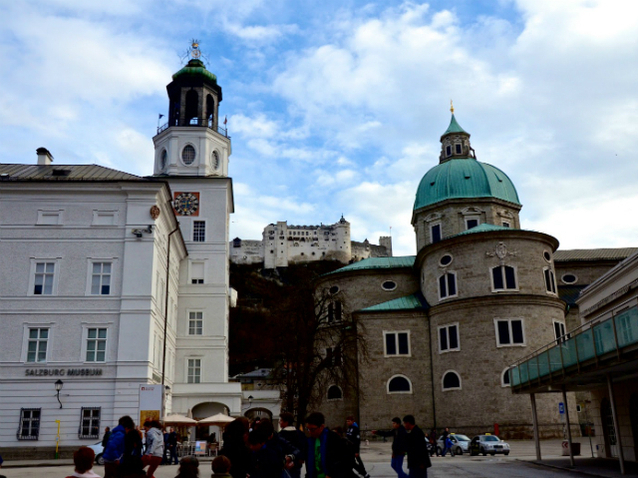 Each year the Salzburg Festival is the main opera event of the summer season.The 2014 edition will be the last one to be directed by Alexander Pereira (who will take over the helm at La Scala in 2015), since his contract was shortened by two years by the formidable and unyielding president of the Festival, Mrs Helga Rabl-Stadler. Beginning in 2017, former pianist Markus Hinterhauser will take the reins of the Austrian event, after a “transitional period” (2015-2016) during which German actor and set designer Sven-Eric Bechtolf, who was in charge of the Festival’s Theatre section,will take over.

With its budget of €60 million (half of it from box office receipts), the 94th Salzburg Festival’s offerings will rival those of the greatest opera houses.  Operas of course – eight this year, two of them in concert version – as well as recitals, symphony concerts, chamber music, even sacred music – to open the festival (Hayden’s Die Schöpfung on 18/7) – all served up by the greatest voices, the best-known conductors and the finest orchestras!

A galaxy of stars will then come together for a Trovatorethat may attract a lot of attention.After coming together for the rare Giovanna d'Arco by Verdi in loco last year, Anna Netrebko (Leonora), Placido Domingo (Conte di Luna) and Francesco Meli (Trovatore) will meet again, joined by the no-less-superb Marie-Nicole Lemieux (Azucena).The staging is by Alvis Hermanis, and the great Italian conductor Daniele Gatti will be conducting.

A dream cast as well for Der Rosenkavalierwith Bulgarian soprano Krassimira Stoyanova as the Marschallin, Sophie Koch as Oktavian, Mojca Erdmann as Sophie and Günther Groissböck as Baron Ochs.The Vienna Opera’s musical director, Franz Welser-Möst, will conduct the Vienna Philharmonic, and the staging will be done by the former director of the Komische Oper Berlin, Harry Kupfer.

The artistic director of the Salzburg Pentecost Festival, Cecilia Bartoli, will return in the title role of Rossini’s La Cenerentolain the production by Damiano Michieletto, which will debut in loco on June 5.Net Value*

As it does every year, the Festival also seeks to be an opportunity for (re)discovering rarer works, and the 2014 edition will feature Fierrabras, the Franz Schubert opera inspired by the legend of Eginhard und Emma and the Chanson de Roland. The work will be staged by Peter Stein and performed by artists like Julia Kleiter, Dorothea Röschmann, Michael Schade and Georg Zeppenfeld.And to demonstrate (as if it were necessary) that opera is a living art that is constantly renewed, the Festival will offer a new work, Charlotte Salomon, specially commissioned from composer Marc-André Dalbavie (who will conduct), inspired by Charlotte Salomon’s Leben? oder Theater?, combining pictorial and musical art.Belgian Luc Bondy, one of the greatest theatrical figures of our time, will be directing.

The opera programme for the 2014 Salzburg Festival will be rounded out by two concert versions: La Favorite by Gaetano Donizetti, with Elīna Garanča, Juan Diego Flórez and Ludovic Tézier in the main roles, as well as a Tristan und Isolde from the West-Eastern Divan Orchestra and their conductor Daniel Barenboim, with Peter Seiffert (Tristan), Waltraud Meier (Isolde), Ekaterina Gubanova (Brangäne) and René Pape (King Marke).