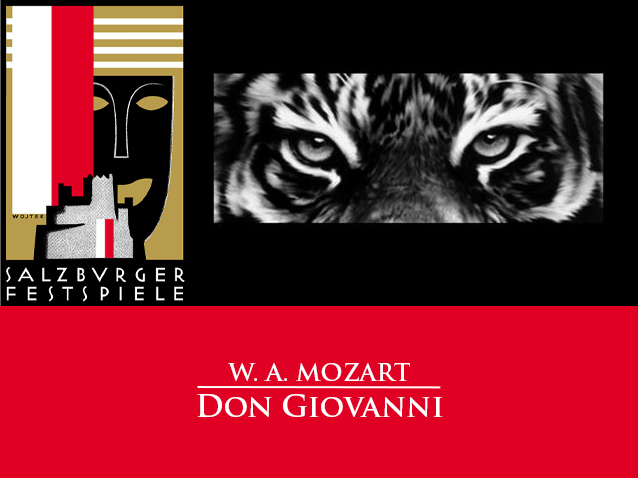 Viva la libertà! – In our time, comparatively devoid of taboos and free of shame, where what was once urgently advocated enlightenment has been degraded to profitable obscenity, a theatrical character such as Don Giovanni is harder to understand and to stage than ever before.

It is his apparent proximity which leads to misunderstandings that are hard to unravel. Compared to the average porn-hardened twenty-first century libertine, Don Giovanni is a romantic hero of metaphysical proportions. Sören Kierkegaard regarded him as an elemental force, related to Eros or Dionysus, an ancient God who owes his reawakening to the church. If the church reinforced the notion of the spirit, it did the same to sensuality by excluding it. If pleasure already existed in vegetable or animal form, then Christianity and the formulation of its opposite redefined it.

To put it another way, the opera Don Giovanni – at least on stage – relies on a world which expresses its respect for sexuality through repression and does not devalue it by means of perverted liberalism and an economically-driven freedom from taboos.

Kierkegaard considers Giovanni’s life to be a frenetic series of moments unlinked by continuity or causality. Just as sexuality cannot be satisfied for ever, neither can Giovanni’s hunger. He renews his desire like Faust: ‘Thus I stagger from desire to pleasure and in pleasure I pine for desire.’ Kierkegaard sees Giovanni as being beyond moral objections, and of course his fellow men could not topple him, this could only be done by a messenger from another world. Every other character in the opera exists purely because of Giovanni’s presence, stepping out of the darkness into the light he makes. One could say that the characters come into contact with the creative and destructive powers of Eros which Giovanni embodies.

It is obvious that each of these can become recognizable only through visible pressure and counter-pressure, i.e. the self-generating and mutually reinvigorating opposites of repression and protest. Hidden in the interplay between them lie the ambivalences which give the opera its meaning.

The freedom which Giovanni thirsts for has nothing in common with the middle class liberal ethos and desolate middle class freedoms of our times, it hardly comes close. His craving is for a lack of boundaries. Aligned against this is a world of order and strict divisions, of insurmountable differences in class and status, of morality and religion, whose mechanisms of repression are made visible when confronted with Giovanni. ‘Freedom to do what?’ Mozart and Da Ponte might ask their Giovanni, concerned. To have a feudal master articulate the rebellious demand for freedom on the eve of the revolution, to make this murderer and alleged rapist a character with whom we identify in order to bring hell on stage in the finale – this undertaking is so rich in contradictions, both suspected and explicit, so rich in fears and hopes, false and genuine outrage, support and opposition, earthly and religious horizons, indecision and daring, humour and gravitas, that one would think a wrestling match were taking place in which neither competitor loses, but in whose heat the battlefield goes up in flames. Liberty and its lack appear by its flickering light as equally terrifying giants. Our age puts out this fire by psycho-pathologizing Don Giovanni. As nothing more is sacred to us, we find nothing unsacred. Viva la libertà !