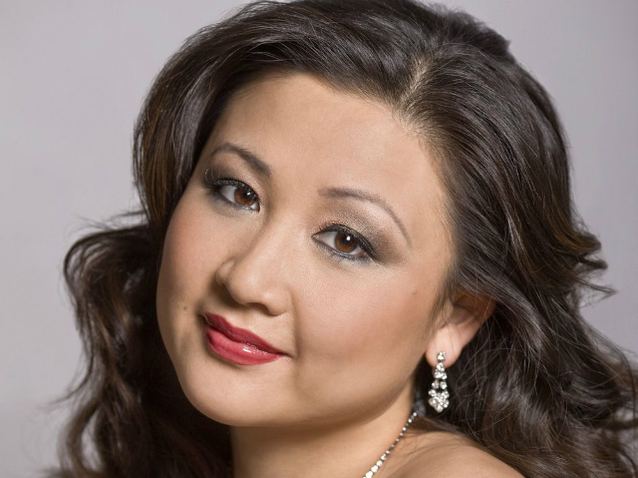 Opera News calls her "spectacular," the Chicago Sun-Times "a revelation" and "tiny dynamo," and the Chicago Tribune’s John von Rhein adds that Kathleen Kim "nailed her stratospheric coloratura aria with a precise, penetrating soprano." Such are the accolades bestowed on this young Korean American coloratura soprano that important opera houses are taking notice. Latest case in point: the Metropolitan Opera engages Kim for her debut during the 2007-08 season as Barbarina in Le nozze di Figaro, followed by Oscar in Un Ballo in Maschera and covering Marie in La Fille du Régiment.


2009/10 offers her biggest roles yet at the Met with Zerbinetta in Ariadne auf Naxos, Olympia in Les Contes d’Hoffman, and a return as Papagena in Die Zauberflöte. She will also make her debut at Atlanta Opera as Queen of the Night in Die Zauberflöte. Other engagements include Armida in Rinaldo at Central City Opera and her first Carmina Burana with the Springfield Symphony.


In the 2008-2009 season, Ms. Kim makes her debut with Minnesota opera as Blonde in The Abduction form the Seraglio. And she returns to the Metropolitan opera as Papagena in The Magic Flute and as 1st Wood sprite in Rusalka. Also Ms. Kim makes her European debut with Bilbao Opera in Spain as Marie in La Fille du Régiment.


Kathleen Kim made her Mexico debut as Queen of the Night in Die Zauberflöte with the Xalapa Symphony Orchestra during Carlos Miguel Prieto’s final performance as music director with that orchestra.


A recent graduate of the Ryan Opera Center of Lyric Opera of Chicago, Kim appeared during her apprenticeship with Lyric as Adele in Die Fledermaus, 1st Priestess in Iphigénie en Tauride, Page in Rigoletto, Milliner in Der Rosenkavalier and Frasquita in Carmen for student matinees.


In 2006, Kim made her debut with the Chicago Opera Theatre as Madame Mao Tse-tung in Nixon in China for which she garnered rave reviews. Her other operatic roles include Queen of the Night and Pamina in Die Zauberflöte, Najade in Ariadne auf Naxos, Oscar in Un Ballo in Maschera, Dew Fairy and Gretel in Hansel and Gretel and Susanna and Barbina in Le nozze di Figaro for such houses as Lyric Opera Center for American Artists, Sarasota Opera, Opera Festival of New Jersey, Ridgefield Opera in Connecticut, and Opera Eurydice in New York.


In the summer of 2004 Kim attended the Music Academy of the West in Santa Barbara under the direction of Marilyn Horne where she received the Encouragement Award at the Marilyn Horne Foundation Competition. A year earlier, she was a soprano soloist for the National Chorale’s Annual Sing-In concert at New York’s Avery Fisher Hall.


Kathleen Kim has won numerous prizes and awards, including the 2006 Sullivan Foundation Awards, Sarasota Opera Guild’s Leo Rogers Scholarship, and the Rose Ann Grundman Scholarship of the Union League Civic & Arts Foundation voice competition in Chicago. She was also the third-prize winner of the Mario Lanza Competition, a National Finalist of the MacAllister Awards, and a prize winner of the Liederkranz Competition.


Ms. Kim received her Bachelor of Music and Master of Music degrees from Manhattan School of Music.