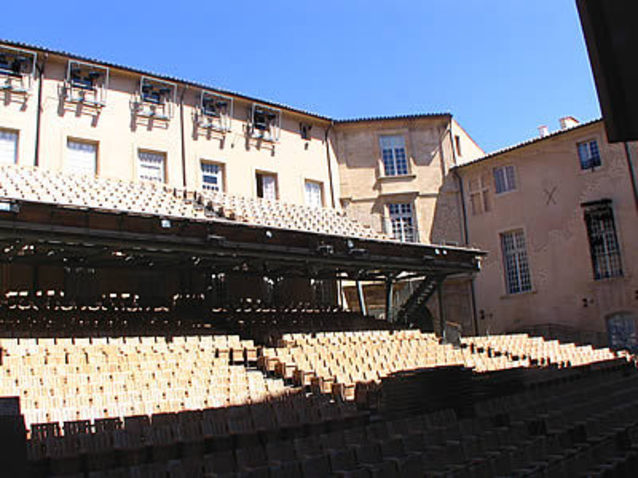 “When I was very young, I was struck by the extraordinary quality and originality of the way the opera house in Aix-en-Provence was run. Gabriel Dusserget had been able to bring in young teams, not part of the star system, artists who were eager to question the music they were to perform, orchestra conductors more intent on finding answers to the questions raised by the score than on demonstrating their savoir-faire.” Louis Erlo, artistic director of the Aix-en-Provence Festival when the Festival was celebrating its fortieth anniversary, is describing its co-founder and first artistic director Gabriel Dussurget.

In 1948, together with Roger Bigonnet, Dussurget set up the first operatic and musical events in Aix-en-Provence. The first trial runs were held in the courtyard of the former archbishop’s palace, on garden chairs for the audience and wooden planks for the artists, with Mozart on the programme and Hans Rosbaud conducting.  The following four years were also devoted to Mozart’s operas, with sliding sets by Cassandre for Don Giovanni, a set by Balthus for Cosi Fan Tutte, and a set by André Derain pour Abduction from the Seraglio. The stuff that dreams are made on! Dussurget immediately became part of the tradition inspired by Diaghilev, favouring the vision of painters as staging engine. From the start his artistic policy in terms of music was also a decisive factor right in the success of these events.

Not only was curiosity towards the music and the performers the leading criterion, but the mission was also to reveal young artists, in the finest settings (prestigious training or conductors). After its Mozartian beginnings at a time when few people – outside of Salzburg – were interested in Mozart, the Festival expanded its repertory considerably: Giulini came to conduct Rossini’s Barber of Seville; then two of Monteverdi’s operas, Orpheus and The Coronation of Poppaea, and Rameau, whose work was received enthusiastically by audiences. After a slack period, the Festival took off again in the late 1970s, thereby contributing to a general renewed interest in the lyric art. While Bernard Lefort called on young singing talents like the Hungarian Sylvia Sass, who was a revelation in the role of Traviata, and brought forgotten works back to the stage, he also hired big stars, and people still recall an unforgettable and charming Semiramis, sung by Montserrat Caballé and Marilyn Horne, in 1979, and a sumptuous Tancredi with Marilyn Horne and Katia Ricciarelli in 1981.

A smart patronage policy (Seita and Erato) and many co-productions, particularly with the Geneva and Lyon operas, enabled the organisers to stage new productions regularly. Appointed artistic director of the Festival in 1982, Louis Erlo focused on choosing works rather than performers. Orchestras featuring ancient instruments were introduced, and rare works by Mozart (Mitridate and La Finta Giardiniera), Rameau (Les Boréades or Hippolyte and Aricie), Campra (Tancrède) found a well-justified place on the programmes. Stage directors were very much in evidence and played a dominant role in Aix’s opera life: an Abduction from the Seraglio by Georges Lavaudan, a Chevalier à la Rose by Tobias Richter, an Orpheus by film director Claude Goretta and an Ariadne auf Naxos by Göran Järvefelt, who was a student of Ingmar Bergman, not to mention performances directed by J.-P. Vincent, Gildas Baudet, Pierre Strosser, etc.

But orchestra conductors were also chosen with care, according to the scores and the singers they were to lead. Hence the problems the singers ran into with Le Chevalier à la Rose were easier to resolve “under the control of Semyon Bychkov”.

Whether at the Théâtre de l'Archevêché (the courtyard set up with some 1,600 seats and, in 1986-1987, equipped with a real modern stage), or listening to a symphony or chamber-music concert, or perhaps a recital in Saint-Sauveur Cathedral or in one of the many courtyards of Aix’s jewel-like private homes, the audience could expect to experience enchantment and admiration. Unlike Salzburg, to which Aix is often compared, freedom, surprise and simplicity are often on the programme. And that is also Aix-en-Provence’s charm.

From 1998 to 2006, Stéphane Lissner headed the Festival. That same year the Théâtre de l’Archevêché was completely renovated, and the Festival presented new creations with the many commissioned works by Maresz, Eötvös, Sarhan and so many other composers. Young talents were also spotlighted with the establishment of the European Academy of Music.

In 2011, as Bernard Foccroulle, managing director, put it, it was time for diversity: “While La Clemenza di Tito is a classic opera par excellence, nourished by the dual tradition of opera seria and the Enlightenment, La Traviata explores with unusual realism – which explains the scandal caused by its premiere – the tragic life of a demi-mondaine on the fringes of polite society. The elegiac nature of the pastorale reigns over Acis and Galatea, a thousand light years from the biting irony shown by Gogol and Shostakovich in Le Nez. For the first time, the strange and elusive characters of Joël Pommerat are expressed in song in the score by Oscar Bianchi. »

The Marriage of Figaro - Aix-en-Provence Festiv...