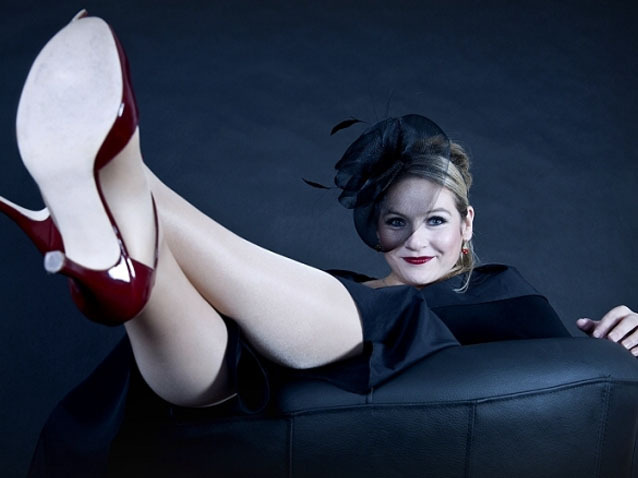 This season the German soprano will perform the Queen of the Night in The Magic Flute at the Staatsoper Berlin, the Bayerische Staatsoper München, in Budapest and Abu Dhabi. At the Stuttgart Opera she will make her role debut as Fiordiligi in W. A. Mozart's Cosi fan tutte. At the Bregenz Festival she will debut as Antonia and Giulietta in The Tales of Hoffmann in a new production of Stefan Herheim.

At the beginning of the 2013/14 season, Mandy Fredrich was engaged at the Stuttgart Opera as Donna Anna in W.A. Mozart's Don Giovanni. Shortly thereafter, she traveled to Moscow to sing in F. Mendelssohn-Bartholdy’s Lobgesang, conducted by Pavel Kogan. In October 2013 Fredrich made her debut at the New National Theatre Tokyo as Contessa in W.A. Mozart's Le Nozze di Figaro, conducted by Ulf Schirmer. This was followed by performances of The Magic Flute at the Hamburg State Opera and the Teatro del Lago in Frutillar/ Chile, where she excelled as Queen of the Night. In February 2014, she returned to the Hamburg State Opera to sing Donna Anna in Don Giovanni. After concerts with a selection of Richard Strauss` Songs with Orchestra in Trieste, conducted by Gabor Ötvös, she made her debut at the lugano festival in F. Mendelssohn-Bartholdy’s Lobgesang under the baton of Diego Fasolis.

In 2012 Mandy Fredrich celebrated her Salzburg Festival debut by performing the Queen of the Night under the baton of Nikolaus Harnoncourt, staged by Jens Daniel Herzog: the production has been released on DVD.

In early 2012 Mandy Fredrich delighted audiences with her comic talents as the Prima Donna in G. Donizetti’s Le convenience ed inconvenience teatrali in Zurich before celebrating her debut at La Scala just weeks later as Der Hüter der Schwelle in R. Strauss' Die Frau ohne Schatten conducted by Marc Albrecht and staged by Claus Guth. After Fredrich sung the Novice in O. Resphigi’s Marie Victoire and various roles in J. P. Ostendorf’s Alice in Wonderland at the Deutsche Oper Berlin, she was engaged in 2012 as Contessa in Le Nozze di Figaro. In November 2012 she was celebrated by the audience and press as Iphigénie in C. W. Gluck's Iphigénie en Aulide at the Oper Stuttgart. Later in the season 2012/13 the soprano interpreted the Queen of the Night at the Hamburg State Opera and at the Palau de les Arts in Valencia

Future engagements will take her to Stuttgart Opera, and to concert halls in Amsterdam, London and New York to reprise her interpretation of the Queen ofthe Night, as well as performing Fiordiligi in W. A. Mozart's Cosi fan tutte, Micaëla in G. Bizet's Carmen and Antonia in J. Offenbach's Les Contes d'Hoffmann.

Mandy Fredrich was born in the Fläming, south of Berlin, and studied voice and vocal padagogy with Jutta Schlegel and Robert Gambill at the Berlin University of the Arts. She completed post-graduate studies with Regina Werner-Dietrich at the Leipzig University of Music and Theatre in 2012. She continued her vocal studies by taking part in master classes with Margreet Honig, Renata Scotto, Ileana Cotrubas, Klesi Kelly ­Moog and Peter Berne.

Mandy Fredrich has won prizes in a number of key competitions; in 2010 she received the 2nd prize in the Concours Ernst Haefliger in Gstaad/Bern. In the same year she won the Competizione dell ́Opera in Dresden as the first German singer in the history of this competition.

While still a student, Mandy Fredrich debuted in 2009 as the Queen of the Night in The Magic Flute at the Theater Hof. Shortly therafter, she interpreted this role in Detmold, Leipzig, Mannheim and Essen as well. The young soprano was also engaged for concerts at the Philharmonie and the Konzerthaus Berlin as well as in London and Dresden.

Helmut Pitsch
Published on the 19 of August, 2015
See all columns