> Home > Encyclopera > The Tales of Hoffmann 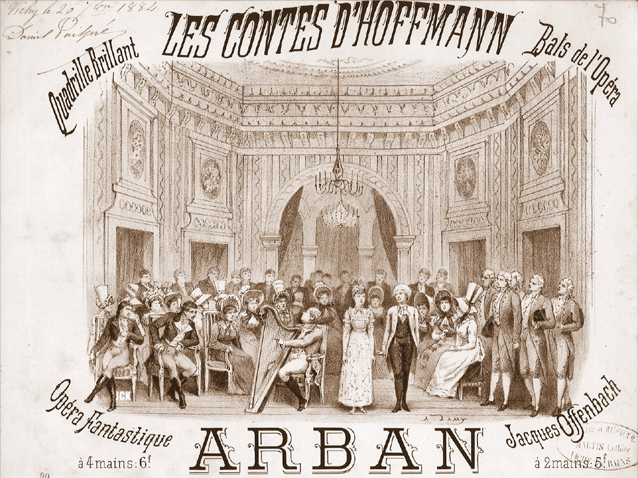 Testament as Masterpiece. For his swan song, Jacques Offenbach created a work that goes against the grain of his hilariously satirical operettas that mocked, while simultaneously charming, the Second Empire and its obsession with pleasure and oblivion. Of course, Offenbach remembers to have fun with this opéra fantastique, but he tinges the adventures of the poet Hoffmann with a dark, fatalistic dimension - in the image of the four maleficent figures who accompany him and push him into unhappiness. In this quest for the absolute and the feminine ideal, intoxication blends with the macabre, the popular vein with lyrical flare-ups. The Tales of Hoffmann features three stages in the sentimental life of a man, three stories forming one unclassifiable opera, a masterpiece of French romanticism, a maze of dizziness and frivolity.

In Luther’s tavern in Munich - where the opera begins and ends - the poet Hoffmann, with his confidant Nicklausse, begins to tell the story of his three unfortunately love affairs, in which Councillor Lindorf has played a crucial role, dressed in three different costumes, each more diabolical than the others. In Hoffmann’s mad passion for Olympia the mechanical doll, Lindorf has become Coppélius, a street vendor crushing the poet’s impossible dream. With the singer Antonia, he was Doctor Miracle, a maleficent charlatan whose advice struck down the girl, thereby killing the mad love Hoffman had for her. Finally, in Venice, the magician Dapertutto has manoeuvred the courtesan Giulietta – the object of Hoffmann’s desires – so that she obtains his reflection - in other words, his soul. But Giulietta has fled, and jealousy and crime are blended in this sordid and once again disastrous story.

The poet Hoffmann has taken it into his head to recount his love affairs - three ill-fated loves stymied by three maleficent characters, perhaps all the very same incarnation of the Devil, perhaps the disturbing councillor Lindorf who lurks about mocking him. Hoffmann, now drunk, starts to sing of the legend of Kleinzach before he is overcome by this sad passions.

Dazzled by the beauty of Olympia, whom Doctor Spalanzani has introduced maliciously, Hoffmann allows himself to be blinded: this Olympia he loves is a mechanical doll! A robot! With a very limited vocabulary but nonetheless capable of reciting some delightful couplets in her shrill voice. And of completely dumbfounding Hoffmann.

Olympia has been destroyed by Coppélius, and Hoffmann has awoken suddenly from his illusions. His second love is named Antonia: this sweet girl is a singer, but stricken with a fatal disease that keeps her from uttering any sound. Hoffmann, like Antonia’s father, urges her to be good and to refrain. But Doctor Miracle’s intervention is a fatal one; he orders her to sing and sing some more, even daring to have her mother appear to her in a dream. Antonia collapses, dead.

Hoffmann’s new passion takes him to Venice, where he is smitten with the courtesan Giulietta, who is under the power the the magician Dapertutto. With Nicklausse, Hoffmann’s confidant, Giulietta sings a barcarolle,  “Belle nuit, ô nuit d’amour….”

We find Hoffmann in Luther’s tavern where he has told his three tales. What to expect next? A new conquest? At that very moment Lindorf steals the singer Stella away from him: she might have been the incarnation of the three women he loved. What to do except get drunk again? The Muse then draws the poet nearer, seeking to ease his pain for ever: “des cendres de ton cœur réchauffe ton génie”. 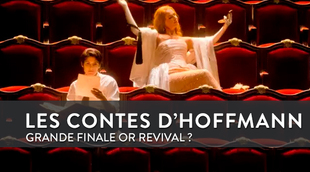 The Tales of Hoffmann, Grand Finale or Revival?

Long considered an amusing “operetta maker”, Jacques Offenbach, the symbol of Parisian gaité under the Second Empire, left his Contes d’Hoffmann to posterity just before dying (he never s…

Sam Smith
Published on the 09 of November, 2016
See all columns