> Home > News > Andrea Chénier, a Poet in the Midst of Revolutionary Turmoil 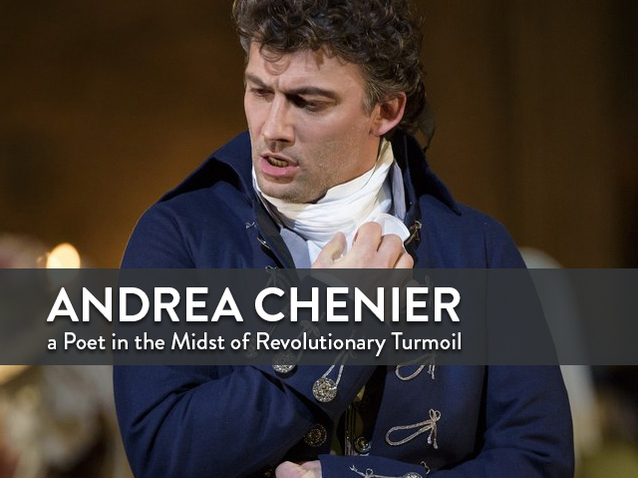 With Andrea Chénier, Umberto Giordano turned an iconic poet of the French Revolution into one of the legendary roles of Italian opera. “Give me a good libretto and I’ll take personal responsibility for the success of the music.” Giordano addressed that enthusiastic request to Luigi Illica, Giacomo Puccini’s usual collaborator. After a promising start that was followed by three successive failures, the young composer staked everything on the work.  Giordano worked with an energy that comes with the last chance. Fortunately success was in the cards, and Andrea Chénier was acclaimed first throughout Italy and later throughout the world. Giordano composed an irresistibly lyrical score for the perfectly constructed libretto. The richness of the sound palette blossoms into many heroic pages of music filled with passionate accents. Mario Del Monaco, Franco Corelli, Carlo Bergonzi, Luciano Pavarotti, Placido Domingo and José Carreras, to name just a few, have put every resource of their voices at the service of the passionate words of the young poet who died on the gallows. 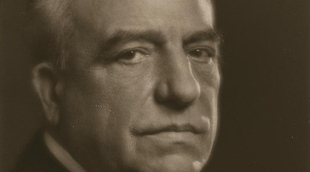 The circumstances surrounding the composition of Andrea Chénier could be the subject of a verist novel! We need only imagine a young composer living miserably in Via Bramante in Milan: the poor musician undertook to write an opera, whose success or failure would determine his future, in a room used for storage by a funeral director. Umberto Giordano stayed calm amidst the mortuary columns by bending to the moods of librettist Luigi Illica, kept busy by his many activities. Once his score was finished, Giordano still had to overcome his remaining reticence caused by his past failures.  Although the details of this touching picture are undoubtedly exaggerated by excessively complacent retrospective accounts, they nonetheless give us an idea of how the future masterpiece was created.
Nothing in his life indicated that Umberto Giordano (1867-1948) would have a musical career. Against the wishes of his pharmacist father who wanted to see his son become a doctor, the adolescent took up musical studies that led him to the Naples Conservatory, where he met Richard Wagner (1813-1883) and received encouragement from librettist and composer Arrigo Boïto (1842-1918), the author of Mefistofele (1868). In 1888, Giordano took part in a competition held in Rome by publisher Edoardo Sonzogno. The young applicants had to compose a one-act opera. Pietro Mascagni won this opera challenge with a work that would be a landmark in the history of Italian opera, Cavalleria rusticana, the start of a new form of expression led by the verist movement. Although he did not win first prize, Giordano was able to get himself noticed, and Sonzogno decided to take him on as protégé, promoting his nascent career. Unfortunately, this promising debut was followed by three failures too disappointing to convince Sonzogno to pursue the adventure. The publisher withdrew his faith in Giordano and stopped giving him any financial aid. The young man was reduced to deciding between a job as the conductor of a military band or as fencing master. But the “novel” continued. A leading figure in Italy’s musical world, wealthy Baron Alberto Franchetti (1860-1942), an influential and generous composer, assigned to Giordano his rights to a libretto that Luigi Illica promised him: Andrea Chénier. Franchetti, decidedly conciliatory, also assigned the adaptation of Sardou’s work, Tosca, to Puccini…And so Giordano came into possession of a good libretto. But once his score was completed under the difficult conditions described above, he ran into new obstacles. Sonzogno thought the work was “unstageable”! A new chance for Giordano. As he attempted to convince Mascagni to intercede for him, he prevented a terrible accident, leaving him forever in his debt.  Mascagni, who had become a celebrity, was going to participate in the inauguration of the first electric tramway line in Florence. As he was getting aboard, he was prevented from doing so by his friend Giordano who wanted to tell him about his problems. The tramway started off without him, fortunately: a few hundred meters along, the brakes gave out.  Several passengers were killed in the terrible accident. Giordano had saved Mascagni’s life, and Mascagni saved Giordano’s career by intervening in his behalf with Sozogno.  The latter finally agreed to put Andrea Chénier on La Scala’s programme, with a dazzling cast. This complete success was hailed by an enthusiastic press. Giordano’s name would be forever included in the history of opera.

“Lord, the ruckus a poet makes when you kill him” 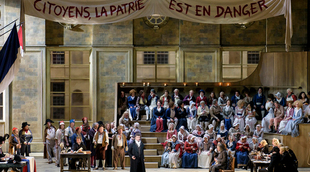 Extreme situations and passionate feelings characterise a libretto solidly constructed around an iconic author of the French Revolution, André Chénier. Only after his death was he hailed as a great elegiac poet, a forerunner of the Romantics. “Lord, the ruckus a poet makes when you kill him,” wrote Aragon. A tragic opera that ends with a searing cry, “Long live death together!”, Giordano’s work merges Eros and Thanatos, Love and Death, in a sublimated vision, joined together against a grandiose background shaken by the upheaval of a revolution. The librettist focused on historical characters in situations that could actually have taken place. The work recounts the poet’s tragic love affair with Maddalena de Coigny, a character inspired by Aimée de Coigny who was the source of the verses of “La Jeune Captive”, the most famous poem by Chénier (1762-1794) as he awaited his death in a cell in Saint-Lazare. Maddalena, the heroine invented by Illica, is younger than her model, who suffered a tragic death. In the opera, Maddalena decides to follow her lover to an ecstatic death. The real Aimée de Coigny (1769-1820), imprisoned at the same time as the poet, escaped the guillotine and would not have uttered Madeleine’s sad words: “I bring misfortune to those who love me.” Illica very ably blended genuine facts and characters with a pure fiction marked by the excesses of one of the darkest periods in the history of the Revolution, the Terror. Ordinary people and aristocrats, soldiers and members of the Revolutionary tribunal form a galaxy of realistically played secondary characters around the protagonists. Other historical figures like Robespierre cross the stage to give even greater density to the re-creation of Revolutionary Paris.
The only genuine fact in the opera is the death of the poet, who was guillotined on 7 Thermidor, Year II (25 July 1794) at the age of thirty-one. He preceded the main artisan of the Terror, Robespierre, onto the gallows by three days.  André Chénier had initially hailed and supported the Revolution before being bitterly disappointed by its contradictions and violence. In 1790 he distanced himself from the Revolutionary excesses of “this last class of the people who, knowing nothing and having nothing, (…) know only how to sell themselves to those who want to pay them.” The poet ended up defending the King and his family. In July 1793, casting caution to the winds, he wrote an “Ode to Charlotte Corday”:
“Beautiful, young, brilliant, taken to the gallows,
You seemed to be riding a wedding carriage;
Your brow remained calm and your gaze serene…”.
These verses seem to describe the character of Maddalena, Chénier’s great love reinvented by Illica. In Giordano’s opera, Andrea appears as a dreamer lost in a reality too cruel, and Maddalena as a girl who is “beautiful, ideal, divine like poetry” (Act II). These two moving characters, facing imminent death, come up against the most dramatic trials in pure verist opera style.

The Thrill of Strong Emotions

Giordano has often been criticised for engaging in too much sentimentalism. Powerful situations structured around the poet’s ineluctable march to his death on the guillotine favour lyric flareups that some have deemed excessive. Andrea Chénier is one of the works characteristic of what is known as  “verismo”, an aesthetic movement that tends to exploit all the resources of tragic realism. Some works composed in Italy between 1880 and 1904 by Puccini, Mascagni and Cilea can be called verist. Their writing is marked by the search for powerful effects needed for the musical description of this “slice of life” with “its tears and cries of rage” mentioned by Leoncavallo in the prologue to Pagliacci (1892). 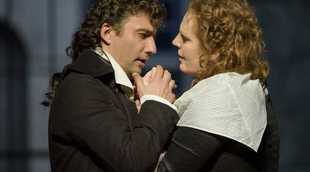 The complexity of human passions is often the main plot of verist operas. Chénier’s character is torn between his political ideals and his aspirations for love, as indicated by one of the work’s most famous arias, the poet’s passionate improvisation in Act 1 serving to present the title role. Chénier appears as an ardent critic of wealth sensitive to the misfortunes he denounces. Driven by his fervent love for his homeland, he also sings for Maddalena, with pathetic, poignant accents, of love, the “divine gift” that is “the life and soul of the world.” Opposite André Chénier stands a romantic rival responsible for many of the drama’s contradictions. A former valet, Charles Gérard is in love with an aristocratic woman, Maddalena, even though he has become a convinced revolutionary. He hesitates between compassion for the two persecuted lovers and the implacable demands of political combat. Maddalena, for her part, is torn between the desire to withstand the terrible trials affecting aristocrats and giving herself over to the morbid fascination that leads her to share her lover’s fate.
This life-and-death drama exacerbated by political conflicts is thus carried along by flesh-and-blood characters requiring the talent of the greatest performers. Andrea Chénier calls for three voices of extraordinary expressive power. Andrea is a “spinto” tenor, Maddalena is a grand lyric soprano and Gérard a Verdian baritone. The score requires that they excel both at “conversation in music” (“quasi parlato”) typical of verist opera, as in the extreme tension of a dark and painful song featuring searing sharps.
The magnificent arias written for Andrea have always tempted the greatest tenors, whether Verdian or Wagnerian. The richness of the sound palette blossoms into many heroic pages of music filled with passionate accents conveying humanitarian ideals. But the best-known and most overwhelming aria is Maddalena’s, of which Maria Callas gave an unforgettable interpretation: “La mamma morta” (Act 3). Starting in the low register, the voice rises gradually to a high pitch, reaching the most incandescent summits of lyricism. Hollywood played homage to this emotionally powerful aria in a key scene in the film Philadelphia (1993) by Jonathan Demme. Renata Tebaldi, Raina Kabaivanska and Mirella Freni have also been great Maddalenas.

André Chénier is not staged as often as it warrants because of the need for such an exceptional vocal trio. In this historical drama of unrivalled emotive power, Giordano makes use of all the resources of an irresistible lyricism. It was to be his only masterpiece, as if fate wanted verism’s main representatives to be able to leave their name to posterity through a single work: Mascagni with Cavalleria rusticana (1890), Leoncavallo with I Pagliacci (1892), and Cilea with Adriana Lecouvreur (1902).

the 28 of January, 2015 | Print
Previous article Next article 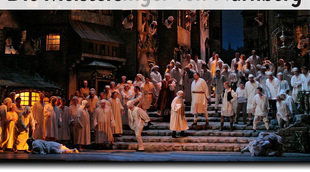