The Demon falls in love at the Liceu 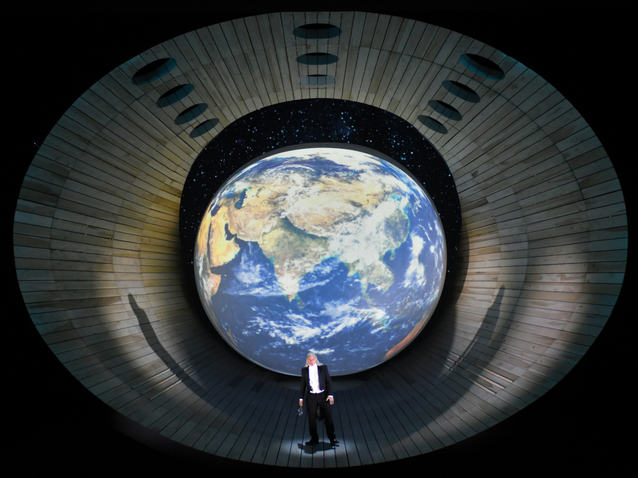 Demon, the opera by Anton Rubinstein with libretto by Pavel Alexandrovich Viskovatov based on the homonymous poem by Mikhail Lermontov, was premiered in 1875 and was performed often in Russia towards the end of the 19th century, but today is an opera outside the repertoire, almost a rarity.

The fact that Liceu decided to participate in a co-production of the title alongside the Helikon Opera from Moscow, the Staatstheater from Nürnberg and the Opéra National de Bordeaux, appeared like a grave frivolity to most of the theatre’s subscribers, who were of the opinion that there were other “more profitable” titles to co-produce than this one. 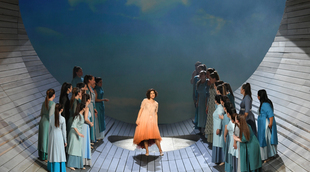 After the premiere, one has to side with the theatre, for once: it was a good idea and it is likely that in the coming years this Demon will circulate Europe with success associated to the name of Liceu. It is possible that, without becoming popular, thanks to this new production, Demon will no longer be an absolutely minor title.

The bet by Dmitry Bertman – director of the Helikon Opera and stage director of this production – and the scenograph Hartmut Schörghofer is a strong one. All the action is developed inside an immense wooden cylinder inspired by the picture The ascension of the blessedby Hyeronimus Bosch (circa 1500). Inside the tube connecting heavens, earth and hell, a huge 6 meter diameter mobile sphere contained a video projector using the sphere as a screen. This surprising scenography was awkward to navigate for the singers and almost impossible for the choir, but was visually incredibly powerful, subjugating and acoustically perfect as it strongly projected the voices towards the audience.

With substantial cuts (amongst which the ballet) reducing the piece to just over two and a half hours, this Demon presents a perturbingly human demon, tired of spreading evil around the world – humans do this task well enough without his help – who will try, fruitlessly, to redeem himself through love. In the end, the demon evokes pity, understanding and empathy in the spectator whilst the angel ends up transformed into an almost hateful guardian of the law, insensitive to the suffering. Astonishing. 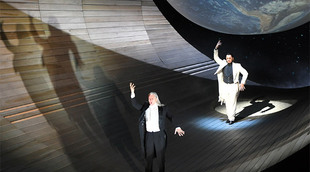 Not everything is spot on in the dramaturgy, but there are some gems that add new meaning to the piece. By placing a countertenor in the angel’s role, instead of the original mezzosoprano, wearing the same costume as the demon with inverted colours, we experiment a duality within the visual symmetry. These are two sides of the same coin.

The performance had great vocal level and a correct instrumental level. Mikhail Tatarnikov, the conductor, secured an orchestral score that, despite a few ‘orientalisms’, sounded a lot more Germanic that Russian. It seemed as if in many moments it could have been attempted to go further in expressive intensity and, altogether, instrumentally the performance remained somehow cold and distanced. In any case, it was correct at all times.

The voices were the best assets. Young soprano Asmik Grigorian, who in the role of Tamara wins the demon’s heart, won the audience’s as well. The voice of this lyric soprano is beautiful, has good projection and is homogenous. On stage, she knew how to make her character evolve towards transcendence, and her performance in the long final duet with the demon was by far the best moment of the night, was splendid.

Egils Silins, specialist in the role of the demon, was replacing the late Dmitri Hvorostovsky who died last November and had shown interest in participating in this production from its beginning. Silins gave an excellent demon from every angle, both vocally and scenically, highlighting with great skill the very human suffering of the character.

The choir, very awkward on stage due to the lack of space and the floor’s inclination, delivered really well in an opera in Russian that is out of their repertoire. For now.