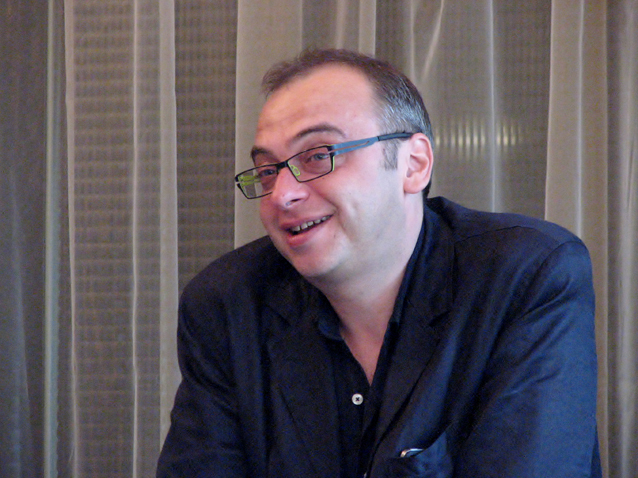 Born in Moscow. In 1984 at the age of 16 he entered the Lunacharsky State Institute of Theatre Art (now the Russian Academy of Theatre Art), where he specialised in directing music theatre under Professor Ansimov, People?s Artist of Russia. He began his artistic career while still a student, staging a series of musical and drama productions in professional theatres in Moscow, Tver and Odessa.
In 1990 Dmitry Bertman established the Helikon Opera theatre in Moscow, which was awarded State status in 1993 and soon joined the ranks of Russia?s leading opera houses.

Since 1994 Dmitry Bertman has taught at the Bern Opera Studio (Switzerland). He gives master classes at the Moscow State Tchaikovsky Conservatoire.
Since 1996 he has been artistic director of the directing course at the Russian Academy of Theatre Art, and has gone on to become director of the acting course for musical theatre. In 2003 he was head of the musical theatre department of the Russian Academy of Theatre Art.
Since 2000 Dmitry Bertman has been principal director of the event Stars of the World for Children, run together with Montserrat Caballe. Between 1997 and 2000 he was awarded the Golden Mask, Russia?s highest theatre prize, three times in the category "Best director in musical theatre" (for productions of Carmen, The Tsar?s Bride and Lady Macbeth of Mtsensk). The Helikon Opera has also received this prize in the category "Best opera production" (Lady Macbeth of Mtsensk).
In 2001 Dmitry Bertman was head of the Golden Mask music jury.
In 2000 the Helikon Opera?s production of Les Contes d?Hoffmann was awarded a prize at the Moscow Opera Festival, commemorating four hundred years of opera, in the category "Best production" and Dmitry Bertman won the award for "Best director".

In 1998 Dmitry Bertman was awarded the title of Honoured Artist of the Russian Federation. In 2003 he received France?s Palme d?or (Chevalier class) for services to culture and art. The same year he was presented with the Maltese Cross for his contribution to the development of world culture and the title of Count of Sovereign Military and Hospitaller Order of St John of Jerusalem of Rhodes and of Malta.
Dmitry Bertman was named a People?s Artist of Russia on the issue of Russian Presidential decree No 388 dated 3 April 2005.

The Demon falls in love at the Liceu

Xavier Pujol
Published on the 01 of May, 2018
See all columns