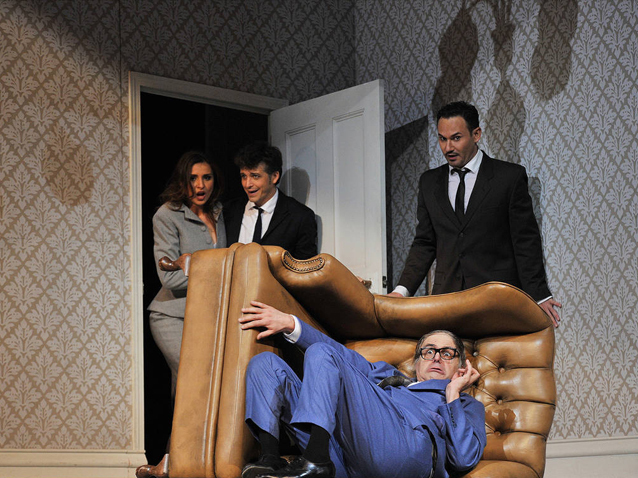 Don Pasquale isn’t maybe a master piece, but it’s a beautiful work with great mastering in the composition that requires also great mastering and experience in its interpreters’ part. On this occasion, in some cases, maybe not enough mastering was displayed.

After almost 30 years without featuring in this theatre (last performances date from 1986) returned to the LiceuDon Pasquale, last Donizzetti’s opera buffa and probably the last opera buffaat all. The subsequent comical operas correspond to a new model with a different structure that doesn’t match with the tradition of opera buffa.

Don Pasqualecame back in a new staging signed by Laurent Pelly, a joint production of the Liceu and the Santa Fe and San Francisco opera theatres which was premiered last summer at Santa Fe.

Pelly tends to work well in the comical register, his beautiful Cendrillon and his ideal Contes d’Hoffmann which the Liceu saw in past seasons give him credit in this sense. However, this Don Pasquale, is not his best work and will pass through time without leaving trace in the memory.

Without being of wrong or betraying the original idea of the piece, Pelly’s proposal puts an emphasis on the most cruel and sordid aspects of the plot, which shortly stop being funny. It turns the characters into a pile of amoral egoists without bringing a new interpretation to the work.

The theatrical direction of the singers, theoretically inspired in the Italian cinematographic comedy from the mid-20th century (Sordi, Gassman, Mastroianni, etc.) is erratic. The scenic setting resolves appropriately the ambiences (the scenography is by Chantal Thomas) and the spatial transformation that Norina-Sofronia produces at Don Pasquale’s house is captured spectacularly by turning the decor literally upside down.

Musically, this Don Pasquale was correct but not much else. Lorenzo Ragazzo, debuting at the theatre and deeply involved scenically in the role of the teased poor old man, was short of vocal power and struggled with giving weight and presence to his lower notes. Soprano Valentina Naforniţa, also debuting at the Liceu sang well, with style, and was splendiddramatically in the double role of Norina-Sofonia, changing register perfectly from one character to the other. Despite this, she had some problems in the fearsome high notes of her part.

Juan Francisco Gatell, who in this season also participated at Il Barbiere di Siviglia as Count of Almaviva, was a good Ernesto with a nice leggero tenor voice which was also very performant in the more lyric passages. He also struggled with the higher notes of a score that constantly demanded to stay in the higher third of his tessitura. However, he did a good job.

The Polish baritone, Marius Kwiecień,another newcomer, whas the one exhibiting a better voice, but his style and phrasing were not accurate, Malatesta needs to be sung with more elegance and less caricature.

The conduction was given to the Venezuelan Diego Matheuz, yet another debut – maybe there were too many debuts for one night -, his work was only sufficient, resulting often in an unbalanced orchestra. The choir, which thankfully was not a debutant, did very well.