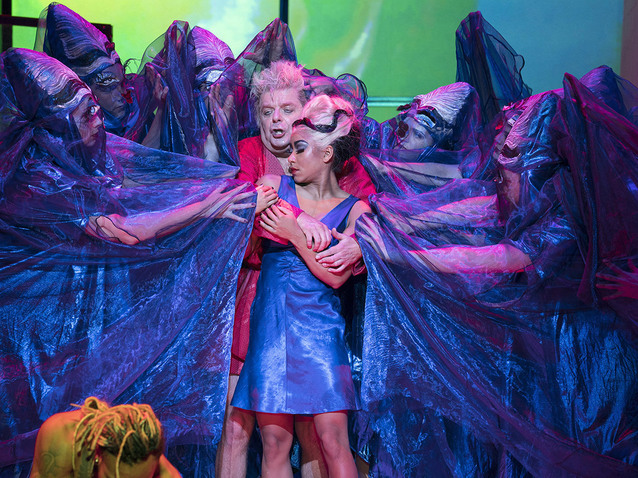 This autumn English National Opera is exploring the Orpheus myth by presenting four operatic takes on it. Now, following Gluck’s Orpheus and Eurydice and Offenbach’s Orpheus in the Underworld, both of which still have performances that can be seen, comes the third addition to the mix, Harrison Birtwistle’s The Mask of Orpheus.

Without a doubt there is no other opera quite like it with the orchestra containing no strings, the score including electronic music (which was realised on Birtwistle’s behalf by Barry Anderson) and each of the three acts containing an electronic ‘aura’ that continues throughout, though at different times it can be prominent or inaudible. Peter Zinovieff’s libretto is equally innovative as some of the characters’ utterances are deliberately fragmented and ‘incomprehensible’. 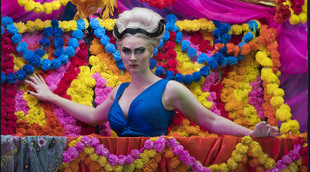 The drama itself is based on the fact that there are many versions of the Orpheus myth, with them including, for example, four different ways in which the figure died. The opera combines a great many of these in a complex affair where different scenes play out simultaneously or quickly one after the other. The story is not told in a linear manner, but rather goes in several directions at once as it examines the contradictions that exist in the various versions of the legend. Over the course of the piece as a whole, individual events can be visited up to three times as they are being predicted, as they are happening and as they are being remembered.

The only time the work has ever previously been fully staged was when it premiered at English National Opera 33 years ago, in a production directed by David Freeman. This new staging comes from ENO’s former artistic director Daniel Kramer, and no-one can doubt his commitment to creating a spectacle. As with the original production, Lizzie Clachan’s set is designed to contain several different spaces to enable various scenes to occur simultaneously. There is a tiled bathroom on one side, a conservatory on the other, and a staircase that divides the two. A bed doubles as a grave and the Underworld, a further transparent box is frequently wheeled on, while the walls are adorned with items that allude to Orpheus’s lute playing such as electric guitars and platinum discs.

Orpheus is played by three different people who represent him as the Man (a singer), the Hero (a silent performer) and the Myth (originally a puppet), while the same also applies for Eurydice and Aristaeus. This production, however, plays down the role of puppets, although they occasionally appear, and instead emphasises the tie between the Myth version of the figure and one other character so that Orpheus the Myth is also Hades (Daniel Norman), Eurydice the Myth is Persephone (Claire Barnett-Jones) and Aristaeus the Myth is Charon (Simon Bailey). The original production also saw all of the singers wear (and sing through) masks, while this one only sees a few of these appear. All of these are perfectly legitimate directorial choices, but the tendency is to play up the spectacle to the slight detriment of meaning. For example, in Act I Aristaeus the Man rapes Eurydice while simultaneously Aristaeus the Myth simply tries to inspire her to leave Orpheus. While both of these scenarios are played out here, the distinction does not come across as clearly as it might.

It is a question of degree, as all of the scenes are ultimately explored in the way that they should be. There does, however, seem to be a tendency to worry less about fine tuning each so that every facet of the relevant points are made clear, in favour of saying that since there is an ‘abstract’ element to the opera anyway it is fine to focus on playing up the weird and wonderful effects and trusting that the audience is swept along by these. 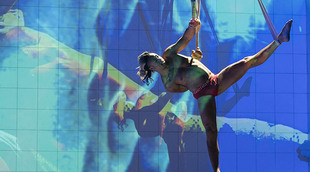 But what effects there as rope dancers (Matthew Smith, Alfa Marks and Leo Hedman as the Hero versions of the main characters) perform sublime routines in mid-air, nurses in large PVC dresses enter with life support equipment, and Daniel Lismore’s bright, extravagant and beautifully made costumes feature 400,000 Swarovski crystals. The cast is also exceptionally strong with Peter Hoare as Orpheus the Man and Marta Fontanals-Simmons as Eurydice the Woman delivering mesmerising performances that are difficult to fault, either for vocal prowess or on the presence that they both radiate. The two conductors, Martyn Brabbins and James Henshaw, are also on top form, ensuring that the orchestra, principals and chorus all achieve the high levels of focus that are certainly needed for this score.

The Mask of Orpheusis to be recommended as it is a unique and wonderful opera that one rarely gets to see staged, and Birtwistle fans may even be interested in travelling some way to experience it. This production, however, while certainly being colourful and exciting in its own right, only perhaps shows the work at ninety per cent of its best, meaning that the recommendation still ultimately derives from the brilliance of the opera itself.

The Mask of Orpheus - English Nationa... 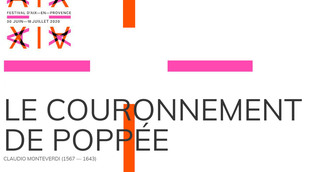