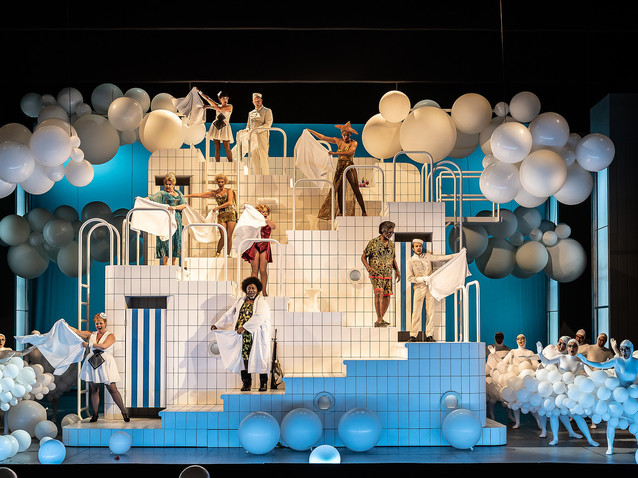 This autumn English National Opera is exploring the Orpheus myth by presenting four operatic takes on it, including Harrison Birtwistle’s The Mask of Orpheus and Philip Glass’s Orphée. Each is being introduced in the order in which it was originally composed so that the season began with Gluck’s Orpheus and Eurydice, and now continues with Offenbach’s Orpheus in the Underworld, the first version of which premiered in 1858.

It is good to see the Offenbach just days after the Gluck, as in many ways the more light-hearted operetta was a direct parody of the earlier work. While in Gluck’s version Orpheus is the son of Apollo, plays the lyre and is so heart broken when Eurydice is bitten by a snake that he immediately attempts to rescue her from the Underworld, things play out quite differently here. He is merely a rustic violin teacher, and so sick of Eurydice (as she is of him) that he engineers it with Pluto, who desires her himself, for her to be bitten so that she dies and descends to Hell. He does, however, eventually attempt to rescue her after a character known as Public Opinion, who acts a little though not entirely like a Greek chorus, threatens to ruin his violin teaching career if he does not do so. Along the way, we encounter the Gods of Olympus as well as a certain dance that is now better known as the ‘can-can’. 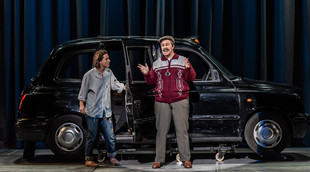 Emma Rice's production for English National Opera, which constitutes a new adaptation with English lyrics by Tom Morris, sets the action in 1957, with the Overture revealing Orpheus and Eurydice having a baby before the child tragically dies. This puts a strain on their relationship, so that any hatred they show each other is neither hyperbolic nor without explanation, and in the process means they become more rounded human beings with real feelings and needs. However, even acknowledging that supposedly light-hearted stories can carry distasteful elements that are worthy of exploration, Orpheus in the Underworld should still ultimately be a fun piece, and it is questionable whether it can really be when the shadow of a dead child is hanging over it. In Act II this element does seem to be forgotten, which means that more entertainment can be gleaned from Mount Olympus, but that only makes it worse to think that something so awful could then be brushed under the carpet so easily.

It also makes the piece unbalanced because it undermines the central joke that, in contrast to the Gluck where Eurydice is everything to Orpheus, here he is keen to see the back of her, and has to be forced to go and rescue her! It is totally reasonable to point out that that has strong misogynistic undertones, but while here Acts III and IV, and especially the ending, reveal these to the full by showing just how badly Eurydice is treated, one cannot help feeling that it would have been more effective to have raised the point in an understated manner, and then left us to infer more. 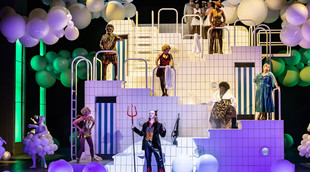 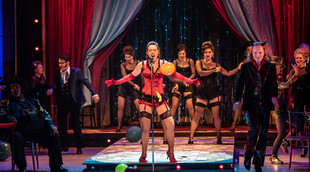 The aesthetic is generally pleasing with Act I on earth being dominated by bright pinks that, mainly through lighting alterations, give way to monochrome colours (though with a bright blue sky) for Mount Olympus in Act II. Aristaeus’ sheep are portrayed by white balloons that chorus members carry, while on Olympus they are dressed in white, with their costumes carrying balloons that signify clouds. In all of this, it is good to see the chorus being really integrated into the action, with their frequently amusing movements working well with the grain and irony of the piece. All the same, the iconic ‘Galop infernal’ feels lame because it never comes close to building up a sufficiently intoxicating head of steam. True, the ‘can-can’ as we think of it only arose after Paris cabarets such as the Moulin Rouge and Folies Bergère adopted the dance, but the original in the operetta was, if anything, even more spontaneous and riotous. Similarly, the aim here is clearly to focus on the exploitation of Eurydice, but might that not have felt even more shocking had the dance been taken to its hedonistic limit?

There are many telling details so that when Jupiter tells Diana that he turned Actaeon into a stag, a person dressed as one gallops across the stage while Mars, as the god of war, instinctively points his gun at it (although he is stopped from shooting). However, one cannot help feeling that such attention to detail disrupts the overall sweep of the drama, with the consequence that this production does not feel as dynamic or humorous as it was probably intended to be.

The evening is undoubtedly good in parts, however, and Act III is especially so as several principals are really given the opportunity to shine. In fact, the cast, which is led by Mary Bevan as Eurydice and Ed Lyon as Orpheus, is very strong, while the Gods in particular feature a stellar line-up of well established names including Sir Willard White as Jupiter, Anne-Marie Owens as Juno, Judith Howarth as Venus, Keel Watson as Mars, Ellie Laugharne as Cupid and Idunnu Münch as Diana. Operetta, however, is not as conducive to filling large spaces such as the Coliseum as opera, and the two principals who stand out most are those who really do display the energy and charisma for their performances to feel large enough for the venue. These are Lucia Lucas as Public Opinion, whose mode of transport here is a taxi that keeps breaking down, and Alex Otterburn as Pluto who, along with Alan Oke’s Styx, look a bit like the comedy duo of Rik Mayall and Ade Edmondson. In the pit, Sian Edwards’ conducting is excellent, with the consequence that this is a musically inspired, albeit dramatically and conceptually questionable, evening.

Orpheus in the Underworld - English N... 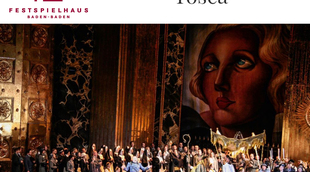 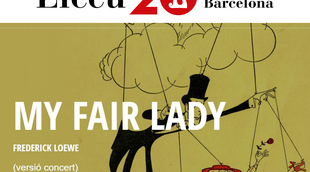