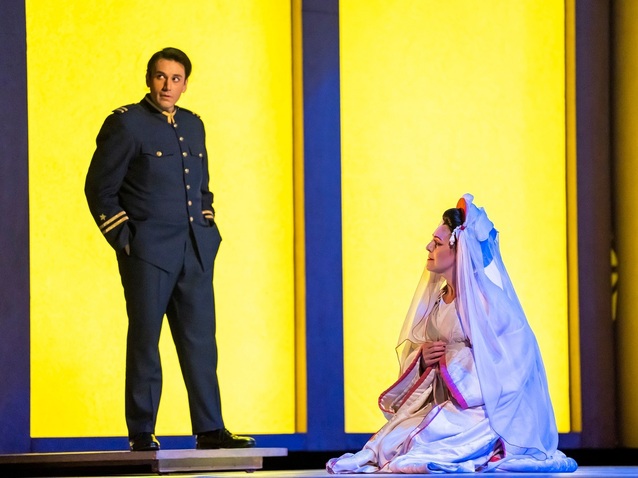 Set in Nagasaki, Puccini’s Madama Butterfly of 1904-07, with a libretto by Giuseppe Giacoso and Luigi Illica, explores the relationship between the American naval officer Pinkerton and Cio-Cio-San from the city’s Omara district. Cio-Cio-San, who Pinkerton knows as Madam Butterfly, takes their love so seriously that she converts to Christianity, and is consequently ostracised by her family. He, on the other hand, sees their marriage as being akin to his Japanese house, which he has on a 999-year lease that he can cancel at any moment. When he leaves for America soon after the wedding, it seems obvious to everyone, including Cio-Cio-San’s maid Suzuki, the American consul at Nagasaki Sharpless and the local marriage broker Goro, that he will not be returning, but Cio-Cio-San simply will not accept this. It transpires she possesses a ‘trump card’ that explains why she believes she can persuade him to come back, but when she plays it Pinkerton does not respond in the way she anticipated and the consequences for her are devastating. 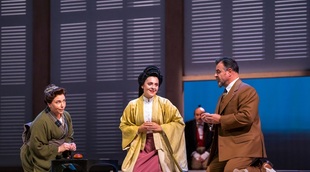 Moshe Leiser and Patrice Caurier’s production has appeared regularly at the Royal Opera House ever since its inception in 2002, but its most recent revival in June 2022 felt quite different to previous ones. This is because that set out to combat the criticism that the opera portrays Japanese people and culture in an inaccurate and stereotypical way. It consequently worked with experts in Japanese movement and design Sonoko Kamimura, Etsuko Handa and June Iyeda to refine posture and placement. By, for example, ensuring that Cio-Cio-San’s gestures always reflected the character’s upbringing, the aim was to provide a more authentic and historically informed portrayal of the people involved. This most recent revival by Daisy Evans has obviously retained all of these changes, and though many audience members may not be able to identify all of the differences, the production feels distinctly more refined and respectful now. One might view it as being akin to the production of a new edition of, for example, a Bruckner symphony where listeners who do not necessarily pick up on every nuance or change still get a very different overall feel from the piece. In this way, given that the revisions are generally felt by the audience, they can be deemed a great success.

In Christian Fenouillat’s set the stage is dominated by a platform that forms the basis of Pinkerton and Cio-Cio-San’s house, while planks lie around to create adjoining bridges. Although these technically lie inside the house, they still allude to the pontoons and waterways that would be found in the vicinity. Paper windows stand on three sides, and these are sometimes opened to reveal backdrops that themselves show different sides to the country. One minute we can be enjoying a realistic view of Nagasaki harbour, and the next staring at an idealised image of Japan, complete with rolling hills and pink blossom. When Cio-Cio-San’s uncle, The Bonze, denounces her at the wedding for disrespecting her ancestors, he appears from behind this final backdrop. With this collapsing to reveal him, it is almost as if he is arriving himself from the spirit world that lies beyond Japan.

Some parts are double cast over the run, with the role of Cio-Cio-San being shared between Maria Agresta and Lianna Haroutounian (who also played her last June), and Sharpless being sung by Carlos Álvarez and Gyula Nagy. Every performer will put their own slant on a role, but the interpretations in this instance feel particularly effective as it is notable how well each of the voices works with the character in question. Agresta utilises her highly secure soprano to excellent effect so that the assertiveness she frequently displays in her sound and manner in itself reveals Butterfly’s desperation. Her beautiful performance of the iconic ‘Un bel dì’ shows how she has spent so many hours building up an image in her head of what that beautiful day when Pinkerton returns will be like, yet Agresta also suggests this Cio-Cio-San is not so detached from reality as to have not considered the possibility he will never do so. It is rather that when she is so desperate for him to come it is all too easy to convince herself of what she wishes to be the case, especially when she has her ‘trump card’ and some more minor reasons, such as the fact he fitted locks to the house, to support her chosen stance. 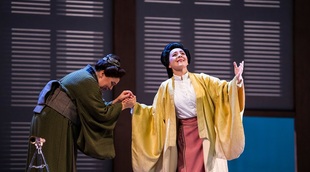 As Pinkerton, Joshua Guerrero asserts an extremely expansive sound with his tenor being so secure that this in itself emphasises the character’s confidence and arrogance. Nevertheless, if Pinkerton seems callous because he thinks little about long-term stability with Cio-Cio-San, then his tendency to live for the moment does see him have immense feelings for her in Act I. This manifests itself most clearly in its final scene as Pinkerton and Cio-Cio-San prepare for their wedding night. Each does not spend the entire time staring into their spouse’s eyes, but frequently gazes heavenwards as the other looks on them. This captures the fact that he is infatuated with an image of her, and that she similarly has an idealised vision of love that is quite removed from the realities of a relationship. While, however, this is a long-term feature of this production, it is noticeable just how predatory Guerrero appears as he stares at Cio-Cio-San as if he is waiting for the right moment to pounce. That he comes across as quite so dominant also makes his cowardice at the end feel even more distasteful than usual as we see him lack the one type of strength that really matters.

Carlos Álvarez is a class act as Sharpless as his strong voice also proves to be highly sensitive. This mirrors his character as he endeavours to show respect towards Cio-Cio-San and struggles to break the awful news to her that Pinkerton will not be returning. With her rich mezzo-soprano, Christine Rice, who replaces a previously advertised Kseniia Nikolaieva, is luxury casting as Suzuki and suggests a particularly caring figure. This almost manifests itself at the start of Act II as anger at Cio-Cio-San’s seemingly blind faith, but as she listens to ‘Un bel dì’ her hands appear to alternate between praying and reaching out to try to support her mistress. Carlo Bosi as Goro, Jeremy White as The Bonze, Josef Jeongmeen Ahn as Prince Yamadori and Gabrielė Kupšytė as Kate Pinkerton also play their parts to the full. In the pit Nicola Luisotti achieves an extremely full sound from the Orchestra of the Royal Opera House, which enables all of the gorgeous strains that are inherent in Puccini’s enigmatic score to come to the fore. This production featuring the cast described above will be broadcast live to selected cinemas around the world on 27 September 2022, with some venues also showing encore screenings on subsequent days. 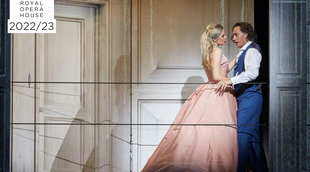 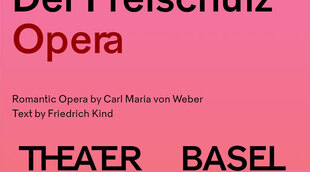