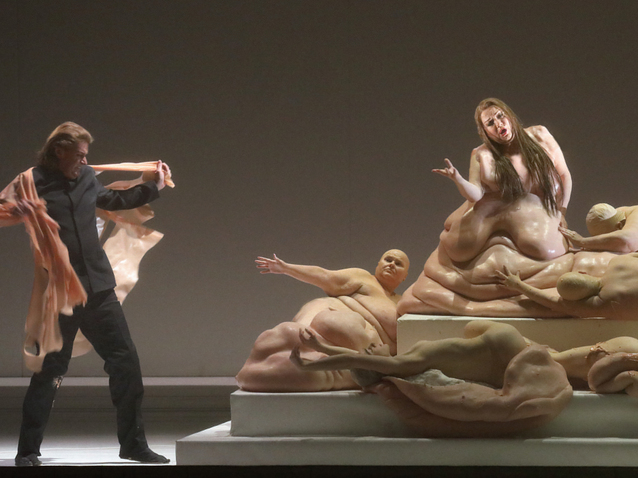 There was a lot to see and somehow nothing. Romeo Castellucci is the Italian director of this new and highly expected production of Tannhäuser at the Munich Nationaltheater, whose history is strongly linked with the oeuvre of Richard Wagner. Romeo Castellucci showcases strong and intense pictures in a continuous but nonetheless uneasy and unclear to follow flow of symbolic acts, and in a way absorbed in the story plot. Laureate in set design and painting in Bologna, he founded the theatre company Societas Raffaello Sanzio, one of the most radical and contemporary in Europe and received awards for his books and progressive theatre productions. Tannhäuser, his first work for the Bavarian State Opera has been received with ambivalence and controversy. 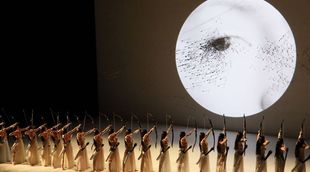 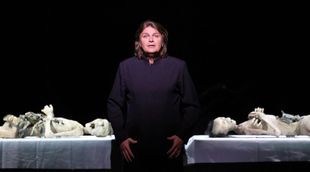 Once the music mystically grows, the direction starts with a kind of classic ballet: bare-breasted amazons with bows and arrows elegantly move on the romantic rhythms of Richard Wagner in bright daylight, culminating in an orgiastic and moving video screening. Less orgiastic but expression of pure lust is the depiction of Venus as a monstrous agglomerate of fat covered with a purple rubber-like glowing liquid. Expectedly enough, the hero Tannhäuser wants to leave and join his bloodthirsty hunting comrades. A shot-dead body is torn on stage, a big installation in the back of the stage exhibits running dark red blood onto a turning platform. The cadaver’s blood symbolises the regained friendship of Tannhäuser and his hunting and singing brothers. The scenes remind of the famous Austrian artist Hermann Nitsch’s blood feasts. Back at Wartburg, Tannhäuser meets Elisabeth in the festival hall,a wonderful installation made out of long evanescent curtains, dissolving suggestively the image of a monumental medieval fortress. Dark and rather static the final act. The stage is dominated by two tombs marked Klaus and Anja – a tribute to the two wonderful singers performing  during the evening, Klaus Florian Vogt as Tannhäuser and Anja Harteros as Elisabeth, both in their role debut – and symbolizing their mortal fate and final salvation. But the most irritating is the exhibition of gradually decomposing human flesh, until it turns to dust, finally reuniting Elisabeth and Tannhäuser’s bodies.

The audience seemed disorientated and   seemingly differed in its reaction. Soft boos gain strength next to swelling Bravos. It is not an outstanding interpretation but certainly a subtle, deeply elaborated characterization of human feelings, enriched with a harmonious choreography by Cindy van Acker and performed by the Bavarian State Ballet as the only moving persons on stage.

The composition of various images on stage was as impressive as the acting was poor – luckily fully redeemed by the exquisite cast of this new production under the guidance of Kirill Petrenko. Once more, he demonstrated his outstanding capability to tame the forces of the perfectly prepared orchestra. To a large extent he kept a transparent soft chamber music-like style giving space to the singers for an intelligible and clear singing. Christian Gerhaher is known as an outstanding Lied singer, a technique he fully implemented in his interpretation of Wolfram von Eschenbach. His famous appellation to the evening star works out as a lovely intimate monologue full of sorrow and admiration. Klaus Florian Vogt similarly succeeded in Tannhäuser’s legendary and dramatic trip to Rome. His tenor is famous for his bright silver timbre more connected to lyrical angel-like colour but he shows power and drama here altogether with an enormous safety and presence till the last tone. Anja Harteros is booked on all soprano roles demanding light metallic bell-like sound. So her Elisabeth stands for purity, respect and faith up to self-abandonment. Georg Zeppenfeld brings up a majestic sonor Landgrave Hermann. Elena Pankratova creates her apocalyptic Venus, thanks to her shrill and sharp, partly fuzzy voice. Once again the choir of the Bavarian State Opera convinces and fills the big house with his tremendous capabilities, well-prepared by Sören Eckhoff. Splendid approval in unison for the musical performances of the evening.