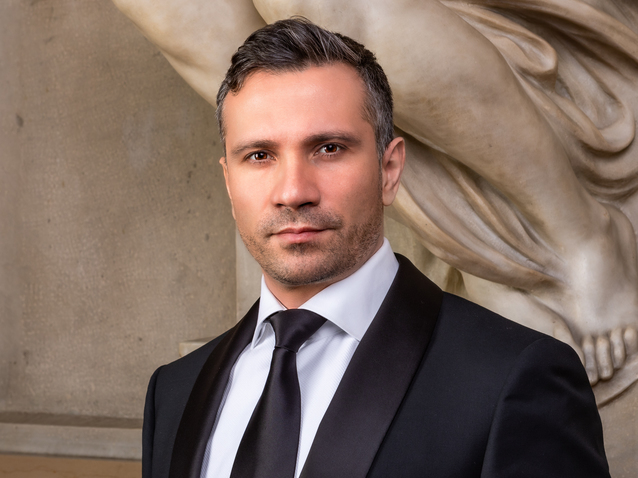 Russian tenor Sergey Romanovsky is coming back to the Rossini Opera Festival for the fourth time for a new production of Elisabetta, regina d’Inghilterra – originally scheduled for last summer – and a prestigious gala celebrating 25 years of Juan Diego Flórez at the Festival. We met him in Pesaro to learn more about his debut in the role of Leicester this year and his other exciting projects.

Opera Online : Has the additional time to prepare Leicester in Elisabetta, regina d’Inghilterra enabled you to internalise the role?

Sergey Romanovsky: Last year it was sad to hear that Elisabetta had been cancelled, but bad news sometimes has to be turned into a positive feeling. I have thought more deeply about the role and have worked on my voice with more patience during the year. It’s been very useful. I feel better prepared and I’ve found richer colours. This opera is a big challenge for every singer and I feel that I know more about the character now.

In Brussels, you sang some of Leicester’s arias for the Queen and Her Favourite streaming programme in March. Was it in some way a training session for Pesaro?

It helps a lot when you sing a concert version of a piece before the staged version. You feel more secure, you identify where you need to improve. I’m very grateful for the opportunity the Théâtre Royal de La Monnaie has offered us, it’s a huge gift. Peter de Caluwe really loves singers, he thinks about what we need. The Italian language is not always easy, especially for Russians. And also musically – we have to learn the style and feel the music in our skin. The orchestra pit at Vitrifrigo Arena in Pesaro is very big due to Covid rules. This is a bit unusual, so singing with the orchestra of La Monnaie has been a very enriching way of getting into the music.

Is Leicester more a soldier or a lover?

He’s a human being like every one of us. We all want to love, and maybe soldiers even more so because they are on the battlefield without their families. Imagine how difficult it must be for a soldier to find love when you are always isolated from it. Leicester’s love has won the battle. He’s totally loyal to his wife. My brother, who has been a soldier for more than twenty years, inspired me for the role. When I see him with his wife and children, he is very caring. Our image of what a soldier is does not apply in a family environment.

Why are you so attracted to Rossini?

I think it is related to my past as a violinist. For almost ten years, I played cadenzas, variations and virtuoso lines. It has become natural to me, it’s now in my blood. Rossini remains young forever. His music is full of inspiration and subtle colours. For instance, when you hear the finale of Guillaume Tell, you feel that you can hardly breathe. Rossini holds a special place in my heart, and very significant performances in my career.

You’re singing Rossini’s Otello in Liège in December. What are the challenges of that role?

You can’t even imagine the challenge it is! There is the vocal difficulty of a Rossini character and the role difficulty of a Shakespeare character. If you think only about the singing, you might lose the character line, so you have to find the right balance and connection. Otello is a battle between tenors, in a positive way, with very high notes. I am looking forward to performing in Liège because I love the city and its theatre. It’s very sad that we have lost Stefano Mazzonis di Pralafera, he was one of those huge opera fathers for singers. And I’d like to dedicate my Otello in Liège to him.

What are your other projects for next season?

I have chosen some interesting roles in theatres that are not so large. I’ll sing Rossini’s Le siège de Corinthe in a concert version in Athens; it will be a huge event with amazing singers. I’ll also do Saint-Saëns’ Frédégonde at the Theater Dortmund, a very interesting project which is half a movie, half a staged version. Then I’ll do Rossini’s Otello in Liège. After a break, I’ll sing Mozart’s Mitridate re di Ponto at the Stanislavsky and Nemirovich-Danchenko Moscow Academic Music Theatre. Mitridate is a dream role for me, like Guillaume Tell. I’ve waited this moment for so long! I even refused Rigoletto in a famous theatre to be able to sing it. I’ll perform all five arias. I will finish the season with Otello at the Rossini Opera Festival in Pesaro.