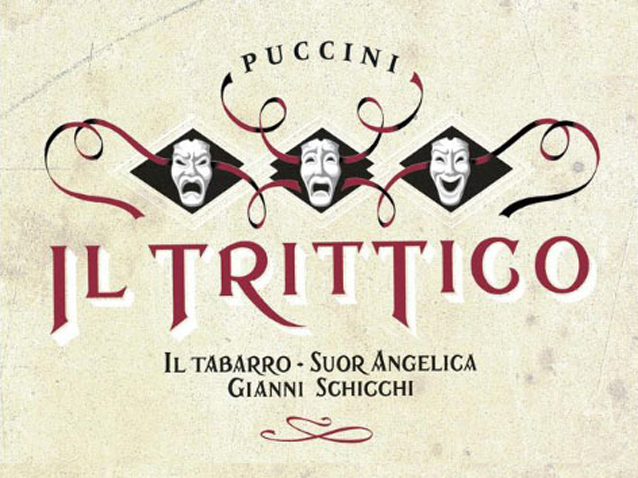 “In the theatre, there are essential rules: interest the audience, surprise them, make them cry or laugh.”  Giacomo Puccini uses these terms to lay out the artistic principles that guided him in conceiving the Triptych, which is presented as an ensemble consisting of three one-act operas. It took several years to complete this unique project, the idea for which dates to the time of Tosca (1900). Puccini spent a long time looking for three subjects that would illustrate three complementary registers: the tragic, the lyric and the comic, in three different eras and three different places. He added a social dimension to this tripartite conception with the depiction of three contrasting milieus: the Parisian proletariat in 1900, the aristocracy of the 17th century, and the world of small landowners in Florence in 1299.  Puccini began with a dark drama, Il Tabarro, continued with a sentimental tale, Suor Angelica, and ended with Gianni Schicchi, in the “commedia dell’arte” style. The construction of this unique ensemble recalls that of a “symphony” composed of two lively movements framing a slower movement. “Allegro” for the dramatic intensity of Il Tabarro ; “Adagio” for the sentimental suffering in Suor Angelica; and “Allegro con fuoco” for the comic joy of Gianni Schicchi. Death plays a key role in all three plots: violent, with the murder of a love rival; ineluctable, with the poisoning of the guilty heroine; and fake, with the talking cadaver. Fully aware of the uniqueness of such a conception, Puccini objected from the very start to the prospect of seeing his Tryptych presented in three separate performances.  But executing this very special work requires a considerable orchestra, sixteen male voices, twenty-two female voices, and large choruses. Does it require three separate casts, or performers capable of performing the three operas in succession? Rendering the uniqueness of each opera plus the unity of the whole as desired by the composer proved to be a delicate undertaking: this explains why the three parts are often staged separately. The opera debuted in New York at the Metropolitan Opera in December 1918 because of all the problems Europe was experiencing, having just gotten over the drama of World War II. Gianni Schicchi immediately won the public’s favour over the other two parts of this Tryptich, which would undergo all sort of cuts and associations with other small-scale works like Bartok’s Bluebeard’s Castle (1918) or Ravel’s L’Heure Espagnole (1911). Even in Puccini’s own lifetime, his “tripartite” work was rarely staged in its entirety. Of the three operas in the triptych, Gianni Schicchi is the most frequently staged, having become something of a battle horse for the top baritones. Tito Gobbi, Gabriel Bacquier and José van Dam, to cite just a few, have played the title role with brio.

A drama of jealousy on a barge docked near Notre Dame, in Paris at the dawn of the 20th century. Stevedore Luigi, Giorgetta’s lover, is surprised by her husband, Michele, who strangles him and then forces his wife to look at the dead man’s face.

In a 17th century convent, Sister Angelica does penance for her crime: having dishonoured her family by giving birth to an illegitimate child. When she suddenly learns that her son is dead, she poisons herself so that she can join him in Heaven.

In Florence in 1299, dishonest and incautious heirs accept help from the crafty Gianni Schicchi. He proposes passing himself off as their wealthy relative, Buoso Donati, who has just died and left his assets to the monastery. By taking the dead man’s place, Gianni Schicchi succeeds in dictating a new will that contradicts the first, contributing most of all to his own enrichment.

Sam Smith
Published on the 28 of February, 2016
See all columns