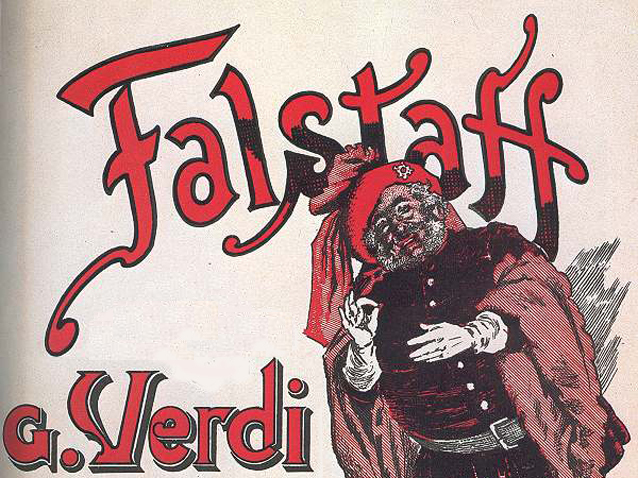 After the success of Otello (1887), the brilliant librettist Arrigo Boito managed to convince Verdi to get back to work enthusiastically on a new collaboration, just as the maestro was experiencing great sadness over his old age. The plan for a work on a comic subject was something Verdi found interesting, although he still bore the painful memory of the failure his only “opera buffa” at the start of his career; it was entitled Un giorno di regno (1840). The attraction Verdi had always felt for Shakespeare’s comedies and the influence of Wagner’s recent incursion into the comic world with his Die Meistersinger also played a role in the genesis of this last work, which brings to a close, with a loud burst of laughter, a body of work primarily turned towards tragedy. However, Falstaff, a testamentary opera, is more than just a throwback to “opera buffa”. As conductor Carlo Maria Giulini stressed: “While the situations are comic, the characters are not.” The Mozart-inspired musical writing is accompanied by daring overtures to modernity. For example, this extraordinary score is rife with moments of pure “conversation through music” that would later be so cherished by Richard Strauss. Pretence and plots, disguises and manipulation alternate between joy and melancholy during a mad day culminating with a final fugue, the academic form par excellence, used with brio in a burlesque spirit. The bittersweet comedy ends in a sort of musical apotheosis when the truth finally bursts forth: “The whole world is a farce, and man is born a fool.” Falstaff quickly became a huge success all over Europe. In the 20th century, the work is less in vogue, primarily because of the difficulty associated with the score’s extreme virtuosity which requires an outstanding cast.

Sir John Falstaff, also known as “il Pancione” (Potbelly), needs to find a quick way to pay his debts at the Garter Inn, where he leads a sybaritic life, though he lacks the means. The knight decides to seduce two rich bourgeois ladies, sending them a love letter as silly as it is passionate. Alice Ford and Meg Page, his victims this time, want to exact vengeance for his trickery, which they discovered very quickly. From false pretences to disguises, poor Falstaff will become the plaything of these wily gossips, skilfully setting a trap for him while contributing to the marriage of two young lovers whom an authoritarian father wants to separate.

Falstaff is seated at a table in the Garter Inn when Dr Caius calls him out to complain about the two servants, Bardolph and Pistol, who cheated him at gambling. Falstaff rejects this complaint sarcastically and sends the importuning visitor away.
As usual, he is short of funds, and to remedy that situation he is writing two identical love letters to the two rich bourgeois ladies, Alice Ford and Meg Page. When the innkeeper hands him the bill, which he can't pay, he accuses his two servants of having robbed him. When the two valets also refuse to take the love letters to their addressees, he chases them out of the inn. So his page Robin will carry the letters.
Alice Ford and Meg Page, who have seen the letters, inform Mistress Quickly of them and decide together to make the knight pay for his audacity.
Ford, Alice’s husband, learns from Fenton, the lover of his daughter Nannetta, what Falstaff has planned, while Dr Caius, Nannetta’s fiancé, is informed of Falstaff’s plan by the servants Bardolph and Pistol. Together they decide to set a trap for Falstaff. The ladies decide to meet with Falstaff at Alice’s home. As the two groups set about implementing their plans, Fenton again declares his love for Nannetta.

Falstaff is delighted because his servants have come back, and Mistress Quickly has just brought him a missive inviting him to Alice’s. And, when Mr Ford, who appears disguised and using a false name, asks him to court Alice to facilitate his own approach, he is thrilled – especially as the surprising request is accompanied by a purse of gold.  As Ford fumes upon learning that Falstaff has already been invited by his wife, Falstaff dons his finest clothes for the rendezvous.

At the Fords’ home, everyone is bustling about, and Alice receives the knight. When the latter begins to appear rather too entrepreneurial, Mistress Quickly announces the return of the master of the house. The latter, mad with jealousy, enters accompanied by several people but does not discover Falstaff hidden behind a screen and vainly searches through the big laundry basket…. When they come back out to examine the other rooms in the house, the women hide Falstaff in the big basket just searched.  Once again, Fenton and Nannetta jump at the opportunity to kiss each other behind the screen. When Ford comes back into the room with his flock, he hears suspicious sounds coming from behind the screen and thinks he has flushed out Falstaff. To his great disappointment, he finds only Fenton and Nannetta, whom he has promised to Dr Caius against his wife’s wishes.
Alice then orders the servants to empty out the laundry basket, in which Falstaff is hiding, through the window into the Thames. To everyone’s amusement, Falstaff finds himself plunged into the chilly waters of the river.

Falstaff is once again at the Garter Inn with a glass of mulled wine, pondering the world’s cruelty. He receives another invitation from Alice with Mistress Quickly as go-between. The meeting is set for midnight, in Windsor Park, near the large oak, disguised as a deer. He hesitates cautiously but nonetheless accepts the invitation, to the delight of the conspirators who are eavesdropping.
Meanwhile, Ford would like to seize the opportunity to marry Nannetta off to Dr Caius, while his wife Alice tries to bring together her daughter and her lover, Fenton.
Falstaff greets Alice passionately. Suddenly two mysterious voices are heard: Spirits, Elves and Gnomes enter, terrorising Falstaff who collapses, asking for forgiveness and repenting of his sins.
The ruckus ends when Bardolph loses his hood. Everyone removes their mask and makes fun of the duped knight.
Two couples then appear, veiled, and ask for Ford’s blessing: a first masked couple consisting of the Queen of the Fairies and Dr Caius, and a second disguised as monks.
When the masks come down, Ford realizes that he has just given his daughter Nannetta to Fenton and his friend Dr Caius to Bardolph. Ford then gives up and acknowledges that he has been beaten by the women. Falstaff is no longer angry, either, as he is invited to the wedding. After the general reconciliation, he consoles himself with these words: “The whole world is a farce, and man is born a fool …”