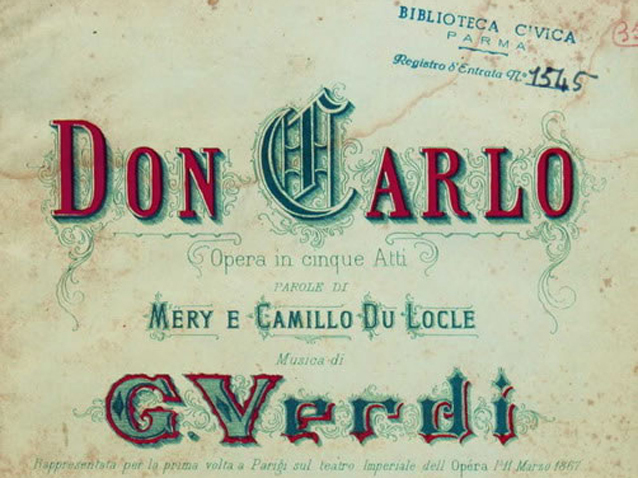 Don Carlos, based on a drama by Friedrich Schiller that he himself called “a family tableau of a royal house”, was composed by Verdi in the Grand Opera style just like “The Sicilian Vespers” before it.
Reworked several times, the final five-act version in Italian dates from 1886.
Don Carlos is not a historical opera in that the entire plot is fictional, but it nonetheless seeks to be a political work, a metaphor for the opposition between Rodrigo and Carlos’s idealistic aspirations of freedom in the face of authoritarianism, the king’s rigidity and the implacable domination of the Church in the person of the Grand Inquisitor.
But, like other Verdi operas, Don Carlos is also a drama of jealousy, a passionate tragedy in which death and betrayal reign.
One of this work’s unique aspects is that it uses a baritone voice to incarnate a naïve and generous man instead of a traitor as Verdi had always done until then.
Finally, Don Carlos is a grandiose fresco in which the importance of the bass roles of Phillip II and the Grand Inquisitor is unprecedented in the composer’s work, especially Phillip II’s monologue in Act IV followed by the extraordinary duet with the Grand Inquisitor, a genuine anthology piece expressing the full depth of the human soul. Don Carlos is a masterful work, perfectly blending tension and restraint, profane and sacred, condemnation and redemption, all against a backdrop of amorous, friendly and political rivalries.

The Infante Don Carlos and Elisabeth of Valois, initially promised to one another, see their love become impossible after a new plan to marry the girl to Phillip II, the Infante’s own father. Don Carlos, desperate over this new political alliance that turns his beloved into his mother-in-law, confides in his friend the Marquis of Posa. Phillip II, whose jealousy is inflamed by the vindictive Princess Eboli, begins to have suspicions toward his wife and his son, who confronts him violently, pleading the case of the Flemish persecuted by the Inquisition. The loyal Posa takes the side of Phillip II, to everyone’s astonishment. But the terrible machine that is the Inquisition is on the march: Posa is killed, and Don Carlo, threatened in turn, disappears mysteriously, led off by the ghost of the great Charles V.

On a hunt in the Fontainebleau forest, Elisabeth of Valois (soprano) and Don Carlos of Spain (tenor) meet and fall madly in love. First betrothed to Don Carlos, Elisabeth finds herself forced for political reasons to wed his father, Phillip II of Spain (bass).

Ten years later, at the monastery of Saint Just, Carlos prays at the tomb of Charles V, his grandfather. A prisoner to his lost love, he confides his despair to his friend Rodrigo, Marquis of Posa (baritone) who counsels him to set off with him to defend the cause of the Flemish, and he obtains for him an audience with the queen so that she can persuade the king to send him to Flanders. At the monastery gate, Princess Eboli (mezzo soprano), lady-in-waiting to the queen, and the other maids wait for Elisabeth to come out. The latter’s meeting with Carlos releases the explosive ardour still burning with their past happiness. But the king’s arrival causes Carlos to flee. The sovereign, left alone with Rodrigo, warns him against the Grand Inquisitor and confides in him all his doubts regarding the feelings linking his wife and son.

Princess Eboli has set a rendezvous with Carlos, with whom she is in love, in the queen’s gardens. Wearing a veil, she deceives the Infante, who believes she is Elisabeth; he unleashes his pent-up love for her. Removing her mantilla, she realises Carlos loves the queen; mad with jealousy, she threatens to destroy them. Rodrigo, arriving on the scene, asks Carlos, out of caution, to entrust all compromising documents to him.
Some months later, at an auto-da-fé at which Lutherans are to be killed, Carlos openly reproaches his father, who has him arrested.

Pondering the punishment he will mete out to his son, the sad and loveless king has called in the Grand Inquisitor, who approves the judgment and also demands Rodrigo’s head. But the king refuses to sacrifice his counsellor.  The Inquisitor is outraged, hurls threats and leaves. The queen appears, panicked by the disappearance of her casket which held a picture of Carlos. The king returns it to her, but not without accusing Elisabeth of adultery. She faints; Eboli rushes in and, alone with the queen, admits to her not only that she stole the casket but also that she was Phillip’s mistress. Sent away, her only choice is between exile and the convent. She then vows to do everything possible to save Carlos.