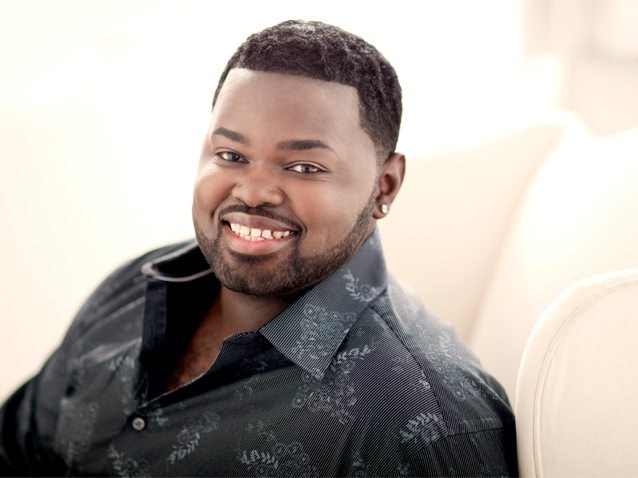 In repertoire encompassing George Frideric Handel’s Giulio Cesare in Egitto to Jonathan Dove’s Flight and beyond, countertenor John Holiday’s expressive and richly beautiful voice has made him an increasingly sought after artist, possessing a “vocal instrument that threatens to equal the name artists in his range.” (Herald Times)

In the 2013 – 2014 season, John Holiday made his debut with the Saint Paul Chamber Orchestra in Handel’s Messiah. He was also seen as the title role in Radamisto at the Juilliard School, with the Juilliard Orchestra in Giya Kancheli’s And Farewell Goes Out Sighing... under Anne Manson, and in Scarlatti’s La Sposa dei Cantici with Ars Lyrica in Houston. He will debut at Wolf Trap Opera as the title role in Handel’s Giulio Cesare in Eggito in the summer of 2014. Next season, Mr. Holiday debuts at the Los Angeles Opera in Barrie Kosky’s acclaimed production of Purcell's Dido and Aeneas as the Sorceress and returns to the Saint Paul Chamber Orchestra in a program of Baroque arias under Jonathan Cohen, as well as Baroque programs with Ars Lyrica and Mercury Baroque.

Last season, Mr. Holiday made his Carnegie Hall debut as soloist in Bernstein’s Chichester Psalms with the Atlanta Symphony Orchestra under Robert Spano, as well as in performances for audiences in Atlanta. He also joined the roster of the Metropolitan Opera to cover Nireno in Giulio Cesare in Eggito under Harry Bicket in David McVicar’s new production and reprised his roles in Philip Glass’s Galileo Galilei at Cincinnati Opera, having first performed the work at Portland Opera for his debut.

Mr. Holiday was an apprentice artist at Santa Fe Opera where he covered the role of Corrado in Peter Sellars’s production of Vivaldi’s Griselda and was seen as the Refugee in Flight for the Apprentice Scenes Program. He was soloist in Handel’s Messiah with the Cincinnati Chamber Orchestra and performed with the Chorus of Westerly (Rhode Island) in their concert of Purcell’s “Come, Ye Sons of Art”. He was also seen in a benefit concert at Dallas Opera having recently been the first place winner of the Dallas Opera Guild Vocal Competition. Additionally, he was seen as Tolomeo in Giulio Cesare in Egitto at the College Conservatory of Music in Cincinnati, soloist with Bourbon Baroque in Louisville, and soloist in Handel’s Messiah. A career highlight includes an invitation by Pope John Paul II to sing as soloist for High Mass at St. Peter’s Basilica and the Sistine Chapel in 2002.

In addition to the Dallas Opera Guild Vocal Competition, Mr. Holiday recently received a first prize from the Sullivan Foundation for 2012 and was also awarded fifth place in the Palm Beach Opera Competition in 2011. In 2007, he was the first place winner in his district of the Metropolitan Opera National Council Auditions. From 2004 to 2006, Mr. Holiday was a first place winner of the TEXOMA region of the National Association of Teachers of Singing.

In addition to the classical repertoire, Mr. Holiday excels in jazz music having opened for Grammy award winner Jason Mraz in concert. He is a graduate of the Meadows School of the Arts at Southern Methodist University, where he earned his Bachelor of Music in voice performance and completed his Master of Music degree from the University of Cincinnati-College Conservatory of Music in the spring of 2012.