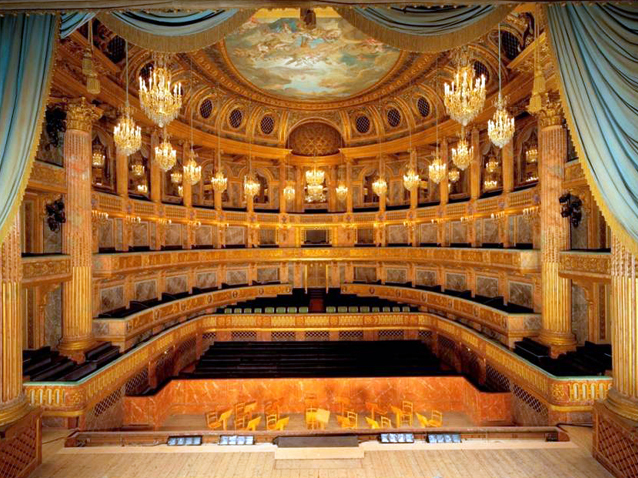 Conceived in 1682 by architects Jules Hardouin-Mansart and Vigarani at the behest of Louis XIV, the Royal Opera of Versailles was included in the plans for the original Château de Versailles but was not inaugurated until 17 May 1770, after twenty years of studies and construction that was often delayed because of the ambitiousness of the project.

Finally entrusted to the king’s chief architect, Ange-Jacques Gabriel (who took inspiration from the great Italian opera houses of Vicenza, Bologna, Parma, Modena and Turin – creating a truncated ellipse with an upside-down vault under the orchestra pit ensuring ideal acoustics – at a time when French theatres were rectangular and did nothing to enhance the music played in them), the Royal Opera of Versailles was critically monitored by the king, who was determined to bring the project to fruition ahead of his children’s successive marriage celebrations. The Royal Opera of Versailles was finally inaugurated on the day of the wedding of the Dauphin (the future Louis XVI) to Archduchess Marie-Antoinette, with a performance of Persée de Quinault and Lully.

As a matter of interest, in order to meet the construction deadlines, Gabriel had all his various craftsmen work at the same time (for example, the woodwork was done in workshops whilst the building shell was being finished), which explains certain architectural inconsistencies in the hall.

Located at the end of the north wing of the Château de Versailles, for a long time the Royal Opera hosted only the most extraordinary events at Versailles, serving in turn as theatre hall, ballet hall, and even banquet hall. It was not until the Ancien Régime that the 650-seat hall opened up more regularly to the public.

The Royal Opera of Versailles underwent multiple restorations (in particular, its baroque hall was renovated between 1952 and 1957). From 2007 to 2009, the Versailles Opera was brought up to code (with a budget of 13.5 million euros) enabling it once again to regularly welcome the public. Since its lavish inauguration on 21 September 2009 (with ticket prices going as high as 25,000 euros, 400 spectators attended the reopening, followed by a dinner in the Chateau’s Hall of Mirrors), each season the Royal Opera of Versailles has hosted eclectic productions as well as the great lyric events of Versailles.