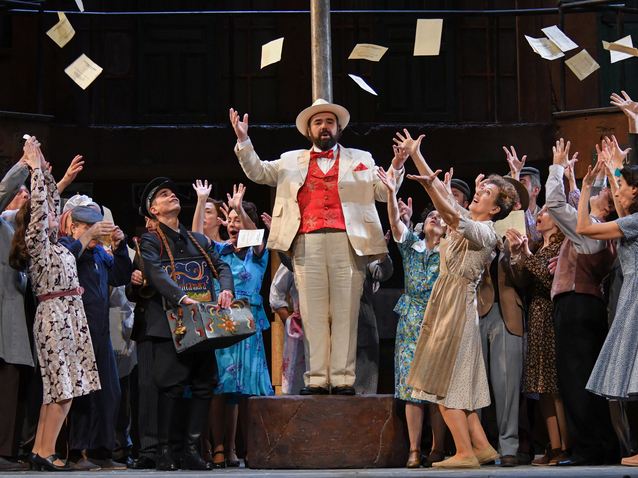 At times, opera can also be the art of nostalgia and of longing, referring not just to the voices.

Liceu has once again restaged in its scene its own production of L’elisir d’amore, one of the most successful productions of the theatre, which has toured around bringing dignity to Liceu’s name.

The staging is signed by Mario Gas as stage director, who started his relationship with this title over 30 years ago. That production was the grandmother of the one that we have today on stage, since it already contained in essence but not quite fully refined yet the fundamental physical, visual and conceptual elements, of the present production. After different restagings, the almost definitive configuration of this elisir arrived at Liceu in 2005. The result was totally satisfactory and it came back to the same stage in the season 2012-13. Today, that old dear elisir has again worked perfectly on stage.

The scenography, impressive in its size and attention to detail, brings us to a suburban environment in the fascist Italy of the mid 30s of the last century that is presented in a cinematographic lighting and a special emphasis on period hairstyles, make up, costumes and props. All this transports us visually to a world close to that described so often by the cinematographic Italian neorealism.

The ingenuity in the portrayal of the characters, both main and secondary, as well as the skill in using the choir scenically – which is never an anonymous mass wandering around the stage but rather an accumulation of small individualized characters – make this delicious staging flow lightly and with ease.

In terms of the music the results were mixed. Conducting was maestro Ramón Tebar, initially everything sounded rather rigid, overly marked on the bar, with little flexibility. Progressively, the conductor and the orchestral sound started to gain confidence, became sweeter, some beautiful phrasings appeared and the final result was, if not excellent, globally quite correct. 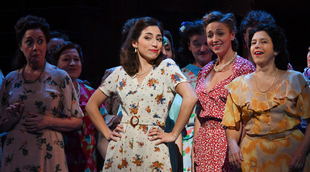 Something similar happened with the voices. It all started a little stiff and as the piece developed everything started getting better. Only the choir, knowing the score inside out, started excellent already and stayed that way until the end.

Australian soprano Jessica Pratt has a belcanto voice of great quality, with lovely lyrical lines, easiness for coloratura, great projection and skill in thinning the sound in the top of the register – which invariably wins the audience’s heart. She started by dosing her voice whilst studying the acoustics and ended up very well. Her “Prendi, per me sei libero” was of the greatest quality.

Pavol Breslik, Nemorino, possesses a correct voice but impersonal, very neutral, without special character, timbre or particular colour. He incorporated the character very well, providing the touch of tenderness which it deserves (Nemorino is naïve, not dumb) and reached all the notes. He was also good with the concertanti but the footprint of his singing in the memory will be tenuous.

Paolo Bordogna started horribly bad, with his voice misplaced, rough and with no projection. We feared the worst. Little by little he also improved and whilst he didn’t obtain a great triumph, he managed to pass the test. To this contributed his commitment to the performance and the fact that where he didn’t reach with the voice he did with the gesture. His histrionic interpretation if the Belcore sergeant – the zillionth reincarnation of the Miles Gloriosus, the showing off military character created over 2000 years ago by Plautus – got the audience’s laugh in each intervention. The young soprano Mercedes Gancedo satisfied all expectations in the role of Gianetta, a role less easy and simple than it looks like.

Roberto de Candia has an agile and emphatic voice as well as the ideal body and sense of comedy for a good Dulcamara. The production saves some fantastic moments for him and the clever singer took advantage of all of them. With a good Dulcamara almost all elisirs work out well, and so was the case of this old dear elisir.