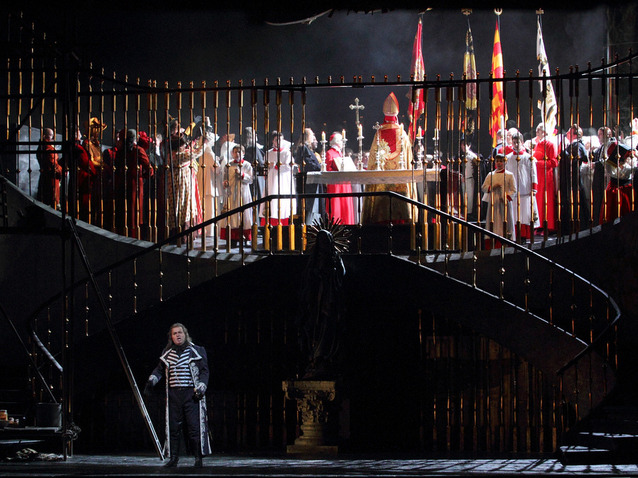 Based on Victorien Sardou’s 1887 French-language play, Giacomo Puccini’s Tosca of 1900 not only occurs in a specific time and place, but on a precise date that can be linked to an historical event. All of the action takes place during the afternoon, evening and early morning of 17 and 18 June 1800, following the Battle of Marengo between Napoleon’s army and Austrian forces. The Austrians were initially triumphant and sent news of victory back to Rome, but the city’s celebrations were cut short when a later report revealed that Napoleon had mustered reinforcements and inflicted a crushing defeat.

Tosca is set across the hours when the contradictory messages arrive in Rome. Angelotti, a consul of the city when it was a republic but a prisoner since Neapolitan forces occupied it, escapes from the Castel Sant’Angelo and turns to the painter Cavaradossi to hide him. Rome’s Chief of Police, Baron Scarpia, attempts to squeeze information as to Angelotti’s whereabouts from Cavaradossi’s lover, the celebrated singer Floria Tosca. She is naturally prone to jealousy and Scarpia taps into this, but in the process he falls in love with her. 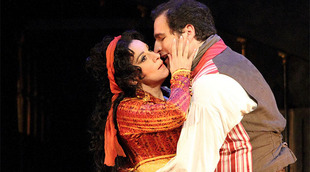 After Scarpia sentences Cavaradossi to death for hiding a fugitive, Tosca promises the Chief to give herself to him if she will release her lover and allow both of them to leave Rome. Scarpia agrees, explaining that he still needs to appear to have killed Cavaradossi, and so (apparently) instructs his agent to stage a mock execution, after which they can both escape. As soon as Scarpia has written out their passport, however, Tosca stabs him to death. At the subsequent execution Tosca discovers all too late that Scarpia tricked her, and that Cavaradossi was shot with real bullets. As news of Scarpia’s murder spreads Tosca leaps off the parapet of the Castel Sant’Angelo and plunges to her death.

Jonathan Kent’s brilliantly effective production for the Royal Opera House, which started life in 2006 and is now enjoying its seventh revival, sees every set work around some form of curve. Act I presents the shadowy side of Rome’s Sant’Andrea della Valle, with the Attavanti chapel where Angelotti initially hides lying both behind and below the church’s main altar. From the audience’s vantage point the nave and chancel stand above the stage, with marble columns and candles proclaiming beauty and light. In contrast, the lower level offers a ‘behind the scenes’ glimpse of the church, where different artistic and architectural styles vie for attention. There are an ancient sarcophagus and Corinthian capital (upon which a statue of the Madonna stands), and the painting Cavaradossi is working on appears opposite the faded remains of a medieval Last Judgement fresco.

It is within this more cluttered area that the church as an institution is shown to be imperfect, which in the context of the Neapolitan occupation derives from its virtual inseparability from police and state. During a recitation of the Te Deum when the choir and crowd sing to the heavens above, Scarpia alone occupies the entire lower level revealing how, in practice, he rules over all three of these domains.

Paul Brown’s set actually places the church at a slight angle to the auditorium, and this asymmetrical trend is continued in Act II when Scarpia’s apartment in the Palazzo Farnese is based around two curves that cross one in front of the other. Interestingly, the only shelves to bear books at all are those that hide the room where Cavaradossi is tortured and even these turn out to be fake. Act III, the scene of execution on the ramparts of the Castel Sant’Angelo, is dominated by a low curved parapet that only runs down one side of the stage and creates a suitably hostile moonlit area. 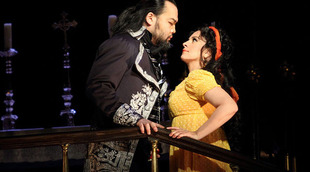 Two casts perform over the run, and Cast A sees Angela Gheorghiu, Riccardo Massi and Samuel Youn play Tosca, Cavaradossi and Scarpia respectively. Gheorghiu is highly experienced in the title role, and reveals a voice of sensational beauty and sensitivity, culminating in her heart-felt performance of the iconic ‘Vissi d’arte’. Massi, who made his Royal Opera debut as Cavaradossi two years ago, reveals a clean and expansive tenor voice, but his performance of ‘E lucevan le stelle’ also stands out because he maintains such perfect control throughout it. Youn on his Royal Opera debut asserts his deep bass voice to great effect, and his acting proves strong. One really senses the way in which the ruthless Scarpia is actually left feeling vulnerable and disarmed by his love for the singer. For Tosca’s own part, following her murder of Scarpia, Gheorghiu reveals a degree of respect for the fallen lion, and even a hint of remorse.

In the pit Emmanuel Villaume asserts a high degree of precision and control over a score that undergoes a remarkable number of ‘mood swings’. This is a reading that allows the details and nuances in sound to come to the fore, and in those moments that employ few instruments the vast Royal Opera House suddenly feels like a very intimate place.

The direction also remains strong to the end. The opening to Act III sees soldiers casually going about their business, which actually enhances our own sense of trepidation as to what might befall Cavaradossi as he faces execution. The manner in which the soldiers march on to shoot him and then retreat also works brilliantly with the music. It simultaneously captures the routine nature of their business from their own point of view, the fear felt by Tosca despite believing everything will be all right, and our own absolute sense of impending doom. As the curtain falls, three of the plot’s survivors can do nothing but take a few awkward steps. This only emphasises their own sickening sense of shame at the fact that all of the giants, the evil ones included, have now passed on.