The Exterminating Angel at the Royal Opera House, Covent Garden 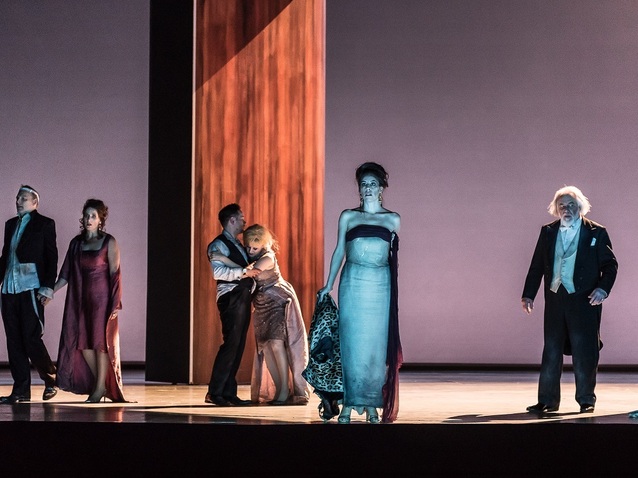 Thomas Adès’ The Exterminating Angel, which premiered at the Salzburg Festival in 2016, is based on Luis Buñuel’s classic 1962 Surrealist film. In it a group of bourgeois guests dine at the house of Edmundo, Marqués de Nobile, and his wife Lucia, only to discover that at the end of the evening that they are unable to leave the house. An undefined force is holding them in one room, and as the days wear on the people stuck there grow increasingly bestial as their viciousness, selfishness and sexual desires come to the fore. Buñuel never explained what the film meant but in 1997 Roger Ebert argued that ‘The dinner guests represent the ruling class in Franco’s Spain. Having set a banquet table for themselves by defeating the workers in the Spanish Civil War, they sit down for a feast, only to find it never ends’.

Adès’ opera remains relatively faithful to the film, with director Tom Cairns’ libretto utilising some of the original lines, but it does combine a few characters and change the order of events a little. It also uses music to expand on the movie’s ideas and bring several new dimensions to the work, particularly by heightening emotions. For example, when Doctor Carlos Conde declares that they are all trapped in the room it is with a monumentality that differs quite markedly from the ‘monotone’ delivery of the line in the film. 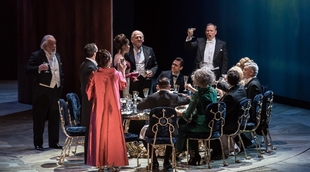 The first ten minutes of the score seem like pure Adès, who also conducts the orchestra, but after this the composer introduces many different styles to make a series of points. Various individuals sing to different combinations of instruments that mark out their characters almost like leitmotifs would. Different instruments are also utilised to generate a spirit of Spain so that the scene with the dismembered hand (an iconic one in the film) is accompanied by Spanish guitar. When Count Raùl Yebenes is hit the sounds from the orchestra make the strikes feel both playful and deadly serious. This reminds us of Tom and Jerry in the sense that Scott Bradley, a ‘disciple’ of Schönberg, achieved cartoonish sound effects by writing exceptionally strong and radical music.

The Exterminating Angel of the title is never explained but here one frequently senses the presence of an angel in a variety of guises. In between Acts I and II the music suggests an angel of death marching to the drumbeat of war, but at one point in Act II, because of the sounds emanating, we are inclined to think of the angel like the Krell in Forbidden Planet. In other words, it is a product of the sub-conscious minds of the characters and, by extension, us.

Many of the sound effects, it would seem, are deliberately designed to disconcert. Before the opera starts bells chime across the auditorium and entire opera house for at least ten minutes as a way of immersing us in the scenario. In between Acts I and II we hear pounding drums and yet, because these are either amplified from offstage or pre-recorded, we are shaken because we cannot see what we hear. It also makes the sound all the more shattering when the beat is joined by the visible timpani, while much of the chorus singing, by being delivered offstage, seems to come from another place in every sense. 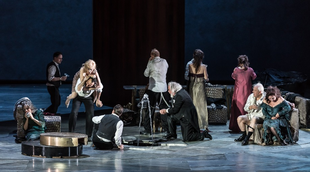 Hildegard Bechtler’s set is effective and, although initially the space appears quite open, the simple introduction of a wall on one side really creates a sense of enclosure. Through alterations in costumes, hairstyles and make-up, as well as through the brilliance of the acting, we really gain a sense of people deteriorating as they might do over several days with little food, drink or medicine. A simple arch generates the border that the guests cannot cross and, unlike in the film, we are able to see those stuck inside the house and those outside unable to enter in the same ‘frame’. Subtle touches also add to the overall effect. In the film the guests pierce a pipe in the wall to obtain water, but here it is under the floor. Thus the large crack that they create to access it makes the scene look even more broken and desperate.

In Act III the drama becomes ever more macabre as much of the action takes place in virtual darkness with John Clark’s lighting designs proving particularly effective. From here we see the lovers Eduardo and Beatriz reflect philosophically from an illuminated box (a cupboard that has broken free from its wall), providing one example of how the opera expands on points and characters presented in the film. The conductor Alberto Roc flies across the room, the scene with the dismembered hand is effectively rendered through Tal Yarden’s video designs (which even reference Buñuel’s 1929 film Un Chien Andalou), and real sheep actually appear. 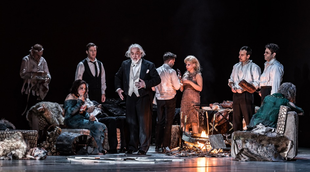 This opera is very much an ensemble effort, but the long cast list reads like a singers’ ‘hall of fame’ as it features such names as Charles Workman, Amanda Echalaz, David Adam Moore, Sten Byriel, Frédéric Antoun, Anne Sofie von Otter, Sally Matthews and Audrey Luna. From the soprano of Sophie Bevan as Beatriz to the mezzo-soprano of Christine Rice (Blanca), the countertenor of Iestyn Davies (Francisco), the tenor of Ed Lyon (Eduardo), the baritone of Sir Thomas Allen (Alberto Roc) and the bass of Sir John Tomlinson (who as Charles Conde also proves a particularly fine actor) there is not one weak link in the line-up.

The Exterminating Angel is a magnificent creation and the fact that the atmosphere at the curtain call on opening night felt rather subdued did not signify a lack of audience enthusiasm for the work. Rather it reflected the fact that viewers had felt so immersed in the scenario that it was difficult for them suddenly to release themselves by bursting into excessively rapturous applause.