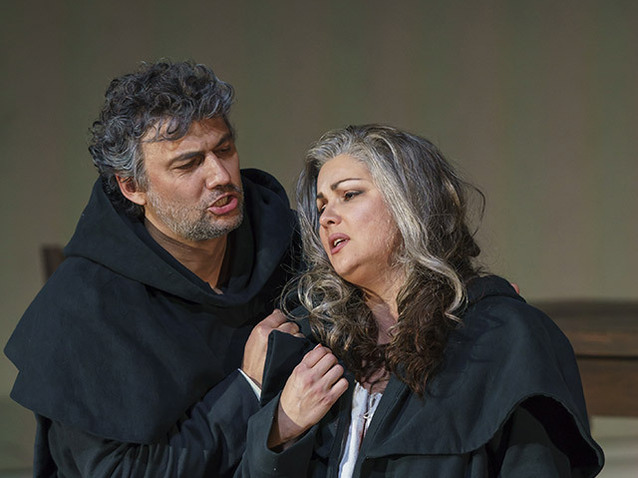 Set in eighteenth century Spain, Verdi’s La forza del destino sees the Marquis of Calatrava oppose his daughter Leonora’s South American lover Don Alvaro, believing he is not good enough for her. When, however, Don Alvaro surrenders himself to prove that he never violated her, he throws down his pistol and accidentally kills the Marquis when it goes off. Leonora’s brother Don Carlo sets out to avenge his father’s death but he and Don Alvaro end up fighting side by side in battle in Italy, and even saving each others’ lives. When each subsequently discovers who the other is, however, tragedy ensues and both Don Carlo and Leonora end up dead.

The opera, which is based on Ángel de Saavedra’s Don Álvaro o la fuerza del sino of 1835 and has a libretto by Francesco Maria Piave, originally premiered in St Petersburg in 1862. However, the version that is almost always performed today, with an Overture that has been used in everything from the film Jean de Florette to Stella Artois adverts, began life in Milan in 1869. Destiny is obviously a key component of the piece, but even this concept takes on a series of guises. After Don Alvaro kills the Marquis, Don Carlo disguises himself to hunt Alvaro down, with his unremitting approach to his task making him believe that Alvaro is destined to die at his hands. The way in which Carlo and Alvaro’s lives subsequently become intertwined also make things seem preordained. However, the fact there are numerous occasions when we feel that events could have turned out differently suggest, on the one hand, that things did not have to be like this, and that, on the other, they were destined to since, of all of the outcomes that were possible, this is the one that transpired. Right to the end, Alvaro seeks some form of reconciliation with Carlo, but Carlo is too determined to fulfil his destiny and dispatch Alvaro. However, since it is he and Leonora who end up dead, it seems that Alvaro, no matter how inadvertently or unwillingly, was destined to destroy the Calatrava family. 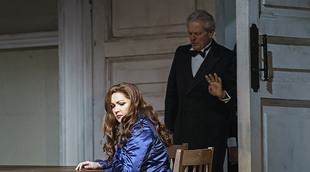 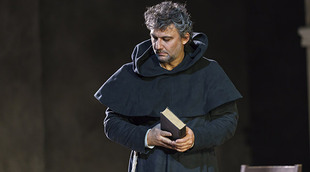 The way in which destiny hangs over the House of Calatrava is emphasised in Christof Loy’s production, which is new to the Royal Opera having premiered for Dutch National Opera in 2017, by setting all of it, via Christian Schmidt’s sets, ‘inside’ the Calatrava house. The Overture reveals Leonora and Don Carlo as children growing up in a well-to-do but stifling environment. Sir Antonio Pappano’s conducting is strong all evening, but particularly so during the Overture, in which he ensures that the tempi, colours and textures constantly alter in line with the multi-faceted nature of the music. In this way, the actions that accompany the score work seamlessly with it as the young Carlo wrestles Leonora to the ground at a slightly frenetic point, before the mood changes and the Marquis of Calatrava enters adopting a slow and authoritative pace.

In Act I Leonora and Alvaro attempt unsuccessfully to escape the house through a window, but Act II, which in reality takes place at a monastery, sees the same house remain, only one of the walls has now been replaced by a chancel. This suggests that if there is a way of escaping fate it is through the church, but that it is hardly a certain route. Act III takes place away at war in Italy, but while the stage appears to present an outdoor area, even here the floor is that of the original Calatrava house. Then the very final scene, which takes place near Leonora’s hermitage, has restored this house to its original state, with all of the walls having returned.

If the overarching premise of the production, however, is sound, it falls down a little around some of its details. During the initial killing of the Marquis huge images of the protagonists in the event are projected onto the walls of the house, which makes it feel like a cinematographic moment of heightened drama. This is appropriate because it ties in with, and enhances, how the music itself relates the event, while also magnifying the moment from which practically everything else in the opera spawns. However, bringing these images back at other points in the opera feels like overkill, while Act III seems to introduce every directorial cliché by seeing the stage filled with prostitutes and chairs. The dancing and revelries at the end of Act III are certainly lively but, while it is hard to criticise the accomplishment (choreographer Otto Pichler has drilled the entire cast extremely well), the section feels incongruent with what has preceded it, even allowing for the fact that its whole point is to provide variation and some light relief. 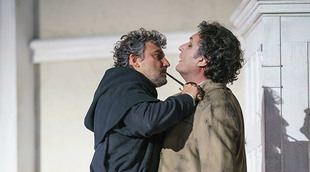 This is very much the dream cast for this opera (performers vary for some roles over the run), and all of the principals sing at the height of their game. Anna Netrebko is outstanding as Leonora with her soprano revealing strength, depth and an excellent degree of shape that make her performance of ‘Pace, pace mio Dio!’ particularly moving. Jonas Kaufmann is also on top form as Don Alvaro with his brilliant, expansive tenor shining in all its glory, as he also brings a notable lightness to certain lines. The standard he sets, however, is met by Ludovic Tézier as Don Carlo, whose baritone feels sublime in its richness and accomplishment, and the pair’s scenes together are particularly thrilling because their voices are so well matched. Ferruccio Furlanetto, with his deep, firm bass, is luxury casting as Padre Guardiano, Alessandro Corbelli provides a master class in comic timing as Fra Melitone, while Veronica Simeoni proves quite the dancer as the fortune teller Preziosilla. This production, featuring the cast described here, will be broadcast live to selected cinemas around the world on 2 April, with some venues also showing encore screenings on subsequent days.