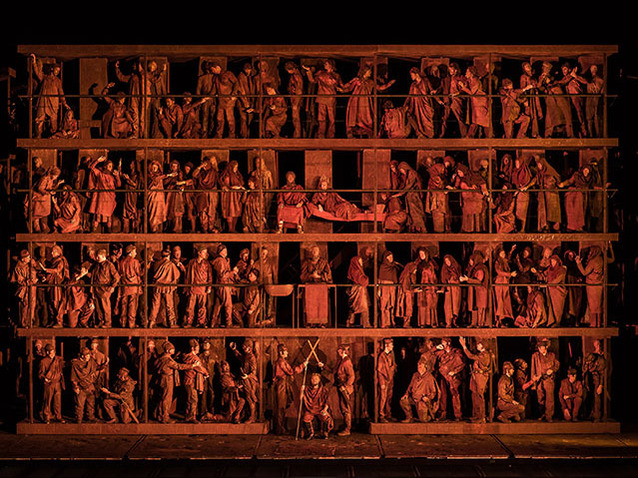 Composer, violinist, pianist, conductor and teacher (Yehudi Menuhin was one of his pupils), George Enescu (1881-1955) is regarded by many as Romania’s most important musician. His sole opera Oedipe is generally acclaimed to be his greatest masterpiece, and yet, in Britain at least, it has been somewhat neglected. This is the first time it has ever appeared at the Royal Opera House, while the production, which premiered in Brussels in 2011, also represents the first time that the work has ever been fully staged in the United Kingdom.

Enescu originally had the idea for the opera in 1910, and immediately started some musical sketches, even though a libretto had not yet been secured. This came (in French) from Edmond Fleg in 1913, but the orchestration was not completed until 1931 and the piece did not enjoy its premiere until 1936. Across its four acts it relates Sophocles’ Oedipus myth, but is quite unusual in the way it is structured. Act III tells of Oedipus Rex, while Acts I and II play out the events from the past that in the original are only reported. Act IV then overlaps in plot with Oedipus at Colonus, although with divergent psychological treatment of Oedipus’ final days compared with the original. 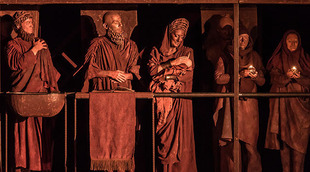 In Àlex Ollé and Valentina Carrasco’s production the setting and period are deliberately kept unclear, and could represent either modern day Greece or twentieth century Romania (red flags are waved at one point). At every turn, however, the past is alluded to and costumes cover the ancient and modern day to make a series of points. Créon wears modern military uniform when he drives Oedipe out of Thebes to take power himself, but when he tries to persuade him to return he sports traditional dress, hoping perhaps that this will give greater legitimacy to his cause.

Alfons Flores’ sets and Lluc Castells’ costumes are certainly designed to combine an ancient sense of grandeur with a modern day sense of decay. Statues stand all around as might be found in Ancient Greece, and yet the clothes and faces these sport come from the present era, so that the figures stand like some modern day terracotta army. Brown colours dominate, which could suggest the wholesomeness of the earth or the rusting that arises with time and neglect.

The staging succeeds many more times than it fails. Act I in which Oedipus is born and the prophecy that he will murder his father and marry his mother is made, sees the set present four different levels. The principals occupy the centre of each while all tiers are packed with chorus members and statues. This works because, although the subject matter is hardly Christian, the music has a sense of ‘canticle and response’ about it. Thus the set-up enables the ‘choir’ to respond to the principals with a certain air of formality and understatement, but without appearing too stiff and undramatic. 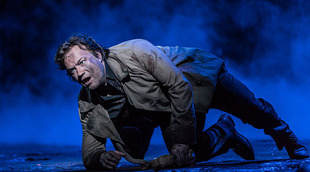 The Sphinx is successfully portrayed as a World War Two plane whose propeller blades whirr around as it awakes, but the scene in which Oedipe kills Laïos after refusing to give way at the crossroads is less successful. This is presented in the modern day with road workers sporting fluorescent tabards, but the original would surely have seen two large parties meeting in which a refusal to give way had everything to do with pride and status. Here, it is hard to see why Oedipe standing alone in the middle of the road would not have simply chosen to step out of it, although this may still say something about Enescu and Fleg’s take on the subject. In the score there is no extended altercation, but rather Oedipe moves in for the kill after one line is uttered, suggesting that his action derives predominantly from the state of mind he is in before Laïos has even appeared.

Leo Hussain conducts superbly on his Royal Opera debut, while Johan Reuter reveals strength, warmth of tone and clarity in the most taxing role of Oedipe. The opera involves a large cast of principals and Sarah Connolly as Jocaste, Sophie Bevan as Antigone, Samuel Youn as Créon, Alan Oke as the Shepherd, In Sung Sim as Phorbas, Claudia Huckle as Mérope and Marie-Nicole Lemieux as the Sphinx all stand out. Meanwhile, Sir John Tomlinson as the prophet Tirésias reveals that he is still peerless on the operatic stage when it comes to embodying a part. While Sophocles’ Oedipus Rex ends with the King’s exile from Thebes, Enescu’s choice to include a further act that focuses on Oedipus at Colonus would seem to derive from his own wish to tell a story of redemption, and this staging certainly makes the ending feel spiritually uplifting as Oedipe goes towards the light.