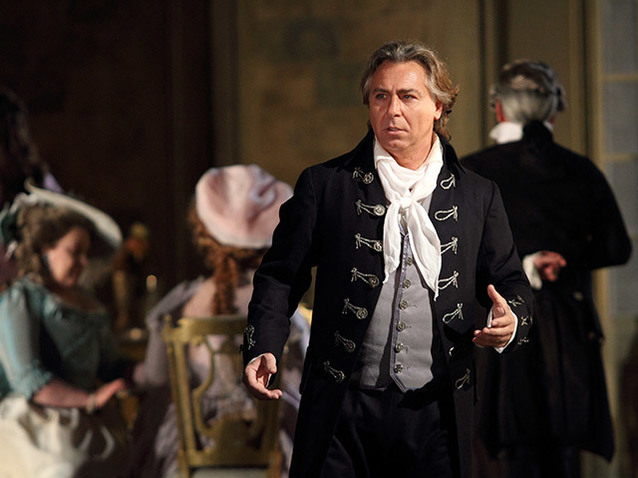 Andrea Chénier of 1896 is by far the best known opera by Umberto Giordano (1867-1948), an Italian composer whose profile might have been higher today had not his considerable talents been somewhat eclipsed by those of his contemporary Puccini. It is loosely based on the life of the eponymous poet (1762-1794), who was executed during the French Revolution, while the character Carlo Gérard was inspired by Jean-Lambert Tallien, a leading figure in the Revolution. 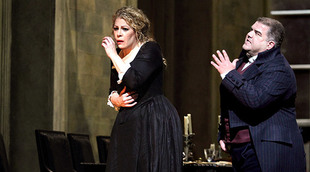 The plot centres on a love triangle between Chénier, Gérard and Maddalena, daughter of the Contessa di Coigny. The stakes are raised, however, by the political situation where it is all too easy for anyone to be accused of betrayal or incur the wrath, as Chénier does, of the prosecutor Fouquier-Tinville. In this way, when Chénier is arrested, Gérard reluctantly writes down charges for his trial, believing this to be his own route to controlling Maddalena. When he discovers, however, just how much she loves Chénier and what she is consequently willing to sacrifice, he feels ashamed at how he has let his own lust rule him, and sickened at the thought that France is even murdering its poets. He therefore proclaims before the tribunal that his charges were false, but Fouquier-Tinville takes them up himself and Chénier is condemned to death. Maddalena goes to the prison where Chénier is awaiting execution and bribes the jailer so that she may swap places with a condemned noblewoman, thus ensuring that they go to their deaths together.

David McVicar’s staging first appeared at the Royal Opera House in 2015, and is now revived by Marie Lambert. Although it does not say anything particularly radical about the opera, it is presented in a highly pleasing manner. The same basic set, courtesy of Robert Jones, forms the backdrop to all four acts, and comprises a wall, set back to varying degrees in the different scenes, with a row of square topped arches. In this way, it can be both an internal wall, leading to other rooms in the Contessa di Coigny’s palace where Act I’s ball takes place, or an external one, so that the street outside Act II’s Café Hottot, along which Robespierre and Gérard pass, can be seen.

If the infrastructure provided by this is effective, the staging is also made so by the detail that the performers apply to it. For example, at the end of Act I, after beggars have interrupted the ball, it then continues as if nothing had happened. However, the sense of purposefulness that can be seen in the final dance, which makes it feel markedly different in intention to one witnessed earlier, highlights the callousness of the aristocracy. 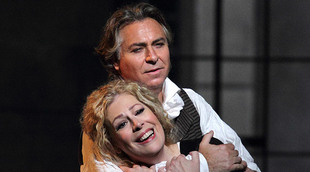 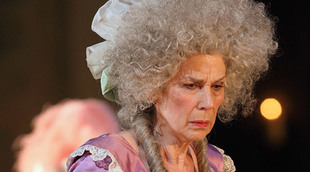 The three central performances are extremely strong, and really help to make the night what it is. Even within this, however, the highest accolades go to Dimitri Platanias as Gérard whose baritone combines absolute strength and security with an ability to convey immense sensitivity. He takes the stage by storm when he defies the Contessa by throwing off his servant’s livery in Act I, and in Act III has the charisma to make us believe that he could persuade women to part with their treasures and sons for the revolutionary cause when others before him have failed. However, in ‘Nemico della patria?!’ we see just how sickened he has become at the thought that he is framing Chénier for the sake of his own passions.

Sondra Radvanovsky is an incredible Maddalena, producing a full, vibrant and impassioned sound, while also displaying some beautiful quiet notes. Her performance of ‘La mamma morta’ is particularly poignant as it reveals her total strength of feeling, while also being executed with considerable sensitivity. The effect is then completed by the expression of shame to be witnessed on Platanias’s face as he listens attentively.

This is Roberto Alagna’s one hundredth performance for the Royal Opera and he certainly gives everything as he projects his large and warm tenor with style. In Acts I and II there are just a few moments of strain, and it is noticeable that his performance of ‘Come un bel dìdi maggio’ improves the moment that he stops having to deliver it while kneeling, but by and large his is a very robust and accomplished performance. In his interactions with Radvanovsky, she appears entirely enraptured with him while his emotions feel just a little more internalised as if metaphorically he is gazing at the heavens. If, however, this prevents them from achieving the ultimate chemistry, it does help mark out a uniqueness to their relationship, thus making it distinct from the other interactions that we see over the course of the evening.

There are also many other delights in store, ranging from Daniel Oren’s superb conducting to a fine set of supporting performances. Particularly noteworthy are Christine Rice as Maddalena’s servant girl Bersi, and Rosalind Plowright, who sang Maddalena for the Royal Opera in 1984 opposite José Carreras’s Chénier, and who celebrates her seventieth birthday during this run as she plays the Contessa.