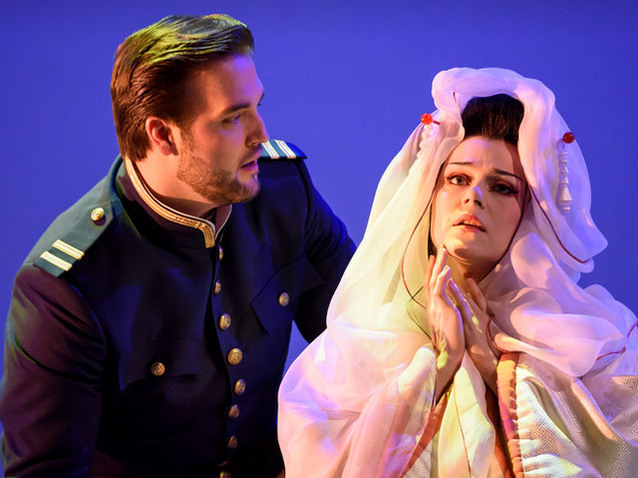 Set in Japan, Puccini’s Madama Butterfly of 1904 explores the relationship between the American naval officer Pinkerton and the Nagasaki born Cio-Cio-San, whom he both affectionately and patronisingly addresses as Madam Butterfly. She takes their love so seriously that she converts to Christianity, and is consequently ostracised by her family. He, on the other hand, sees their marriage as being akin to his Japanese house, which he has on a 999-year lease that he can cancel at any moment! When he leaves for America, and returns only to take the son she has had by him to form part of his new family, the tragedy is complete. 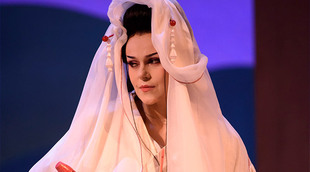 Moshe Leiser and Patrice Caurier’s production for the Royal Opera House, first seen in 2003 and revived here by Justin Way, creates a large ‘minimalist’ space that is then exploited in a variety of ways. Although the same set stands throughout the entire evening, the lighting designs and the introduction of many details make it feel like a constantly changing creation. The stage is dominated by a platform that forms the basis of Pinkerton and Cio-Cio-San’s house, while planks lie around to create adjoining bridges. Although these technically lie inside the house, they still allude to pontoons and waterways that muster up an overall image of Japan.

Paper windows stand on three sides, and these are sometimes opened to reveal backdrops that themselves show different sides to the country. One minute we can be enjoying a realistic view of the Nagasaki harbour, and the next staring at an idealised image of Japan, complete with rolling hills and pink blossom. When Cio-Cio-San’s uncle denounces her at the wedding for disrespecting her ancestors, he appears from behind this final backdrop. With this collapsing to reveal him, it as almost if he is arriving himself from the spirit world that lies beyond Japan.

The characterisations on offer are more subtle and three-dimensional than those to be found in many productions. After all he is responsible for, Pinkerton could never be a sympathetic character, but he is certainly not portrayed here as a pantomime villain. This is partly because his crimes are too great for him simply to be dismissed as one, but mainly because we are made to appreciate his own weakness, which plays a role in him failing to do what he knows to be right.

The interactions between characters are similarly strong, as illustrated by the final scene of Act I in which Pinkerton and Cio-Cio-San prepare for their wedding night. It works to the idea that if Pinkerton thinks little about long-term stability with Butterfly, then his tendency to live for the present does see him in that moment have immense feelings towards her. Nevertheless, it is noticeable that each does not spend the entire scene staring into the other’s eyes, but frequently gazes heavenwards as the other wraps their arms around, or simply looks at, them. This captures the fact that both are not only in love with each other (to differing degrees), but also with an idealised image of a perfect life. 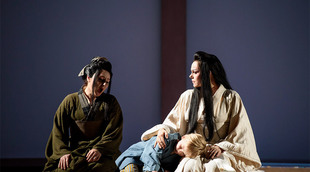 Musically, the evening is very strong. Conductor Nicola Luisotti brings warmth and clarity to Puccini’s enigmatic score, and yet it is striking just how disorientating he makes the sound feel on occasions. This is the added ingredient required to make us feel the true weight of horror in the situation, and it demands exceptional control to generate the required sense of disconcertion.

Most striking of all, however, is the quality of singing across the board. Enkelejda Shkosa as Cio-Cio-San’s maid Suzuki, Yuriy Yurchuk as Prince Yamadori and Anush Hovhannisyan as Kate Pinkerton are just a few of those to give excellent performances in the supporting roles, while Kristine Opolais stands out as Cio-Cio-San. Her soprano is blessed with both a fullness of sound and lightness of touch that makes her output feel genuinely spiritual. The sensitivity of her performance is also aided by excellent precision and attention to phrasing.

Brian Jagde as Pinkerton produces a tremendously large sound that positively reverberates around the auditorium, but his tenor is so smooth, rounded and accurate that it never feels abrasive. He is matched by the baritone of Gabriele Viviani as Sharpless, the American consul who is often forced to cover for Pinkerton, which also proves rich, powerful and strong on enunciation. Occasionally, when the pair sing together, the sound can feel just a little overbearing and unrelenting, but with voices this good who would ever want to tell them to turn the volume down?