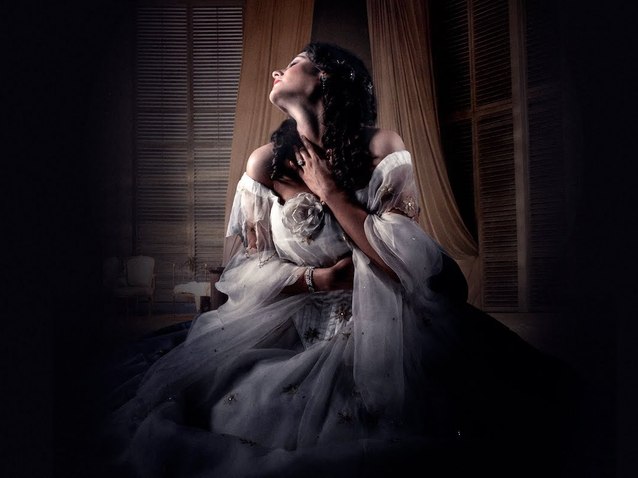 This is the thirteenth revival of Richard Eyre’s 1994 production for the Royal Opera and many subtle touches are to be found within its curved walls. Designer Bob Crowley works virtually every scene around a semi-circular set, with each one employing its own tools and techniques to shed light, and provide commentary, on the action.

Act I takes place in a sumptuous Art Deco interior, revealing Violetta’s role as the archetypal fashionable Parisian. The most important features, however, are the doors. Whenever these are open, and people are free to enter, Violetta assumes her frivolous, sociable persona. As soon as they close, on the other hand, she becomes a far more introverted character. The end of the Overture sees her sitting thoughtfully to one side, and it is only when the doors open at the start of the Act that she changes. They swing out once more as she moves from the contemplative ‘Ah fors’è lui’ to the carefree ‘Sempre libera degg’io’, in which she reasserts her wish to enjoy Parisian life to the full. All of the sets, however, are structured to ensure that the divide between public and private space is not entirely clear-cut, suggesting that Violetta can never truly escape society’s prying eyes.

Similarly, Flora’s party in Act II takes place beneath an ornate palace roof, its gilded surfaces lying at peculiar angles. Here we find a red bullring and a casino table with overhanging metal light. It is not to be taken as a literal space, but clearly the bullring alludes to the antics of Alfredo’s friend Gastone and his companions who play at being matadors, and creates an appropriate arena for action that all too readily alludes to gladiatorial combat. At the same time, the insertion of the more modern table and lamp under a palace roof may suggest that the gambling we see before us is taking its place within a far greater history of wealth and decadence in Paris. 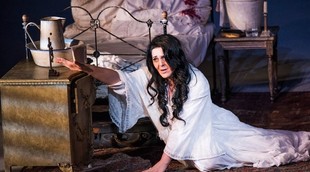 This current revival began in January, but March sees the introduction of a new cast and revival director (Rodula Gaitanou). Maria Agresta plays Violetta (before Nicole Cabell takes over for the final two performances) and is sensational. She has a strong and sumptuous voice that is also beautifully precise and nuanced, and she shapes the most challenging of phrases with skill and expression. That her presence is so great means she can bring about the greatest of contrasts as she moves from ‘Ah fors’è lui’ to ‘Sempre libera degg’io’, while her sensitivity is also brought to the fore in her Act III aria ‘Addio, del passato’.

On the minus side Agresta does tend to overshadow Piero Pretti as Alfredo in Act I so that the chemistry between the pair does not feel as great as it could be. Pretti’s tenor has a highly pleasing tone from the start, but it initially lacks a little in volume and polish. In Act II, however, it comes into its own when Pretti gives beautiful performances of ‘De’ miei bollenti spiriti’ and ‘Oh mio rimorso!’, while Quinn Kelsey with his strong and secure baritone also delivers handsomely as Germont (Tassis Christoyannis plays the part for two later performances). One senses that the values he embraces and attitudes he expresses derive more from social conditioning and societal expectations than any inherent hardness in his heart. Nevertheless, in contrast to some Germonts who positively beg Violetta to give up Alfredo, Kelsey maintains a degree of cool detachment that highlights the character’s presumption that, if he persuades Violetta with the right words, she will give in. This does not mean, however, that he underestimates the magnitude of the sacrifice he is asking of her, and his own feeling nature is clearly shown on his face.

Nicola Luisotti, who is also currently conducting Il trittico at the Royal Opera House, brings excellent balance and sensitivity to the score, while from among the more minor roles Sarah Castle as Flora, Yuriy Yurchuk as the Baron Douphol, Jeremy White as the Marquis D’Obigny and Gaynor Keeble as Annina stand out. By Act II’s second scene all of the principals are excelling while both this and Act III feature some fine ensemble singing. Agresta’s performance may ultimately reign supreme, but for the second half of the evening, thanks to the strength of the performances as a whole, she very much stands as the first among equals. 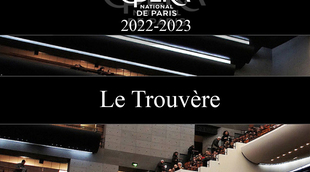