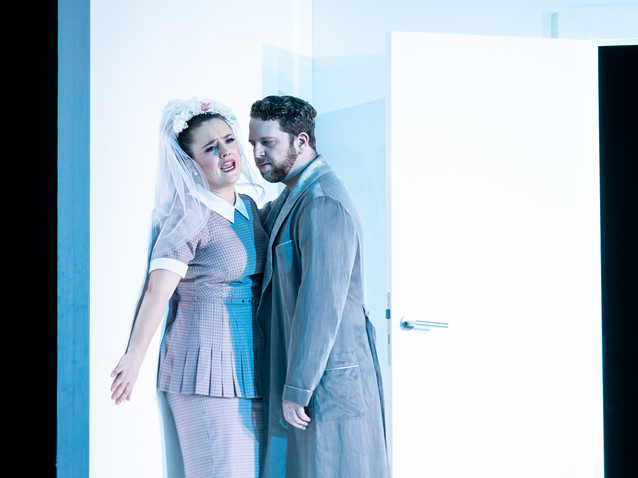 The Marriage of Figaro of 1786 is one of three operas on which Mozart collaborated with the librettist Lorenzo Da Ponte (the others being Don Giovanni and Così fan tutte). It is based on the second of Pierre-Augustin Caron de Beaurmarchais’ trilogy of Figaro plays, while the first was later to be immortalised by Rossini in The Barber of Seville. It centres on the day on which Figaro, valet to Count Almaviva, tries to wed Susanna, maid to the Countess. The womanising Count is intending to restore the droit du seigneur, an abolished feudal law that allows a lord to enjoy any female servant first on her wedding night, because he craves Susanna. Figaro and Susanna thus set out to outwit him as a youth named Cherubino causes havoc with his own promiscuous ways, the Countess feels completely unloved and neglected by the Count and an ageing woman named Marcellina insists that Figaro marry her unless he can pay off his debt. It does have a happy ending, notwithstanding the fact that it seems doubtful the Count really will change his ways, and it remains one of the most frequently performed operas in the world today.

Joe Hill-Gibbins’ new staging for English National Opera, which represents a co-production with Oper Wuppertal, sets the action broadly in the modern day, but the time period is of less importance than the dynamic. Johannes Schütz’s set consists of a white box-like room that stands (for the most part) at the front of the stage and contains four doors on its back wall. The Overture sees a choreographed routine, courtesy of Jenny Ogilvie, in which principals and servants alike pop through the various doors and thus set the tone for the evening.

The room proves very flexible so that at the start it represents Figaro and Susanna’s prospective bedroom. As the pair open the doors to reveal how close the Count and Countess’s own chambers are, these figures are actually shown emerging from them. Of course, they would not really be there but this production blurs the line between representation and reality because when they open the door on the music teacher Don Basilio it certainly seems as if he is staring at them. Similarly, when Figaro ‘addresses’ the Count in his mind in Act I, this production actually has him present and dressing in all his finery. Figaro chases after him trying to whip him with his own coat, but stops and tries to hide it when the Count turns around, even though he only exists here in Figaro’s imagination.

The set does have a few limitations. In the Act I scene in which both Cherubino and the Count end up hiding, they hide behind the opened doors. This seems nonsensical since they could just as easily, and far more securely, hide behind them when closed, and yet if they did so they would be completely out of sight and there would be no humour in the situation. It also forces the production to ignore the whole point that the Count hides unwittingly in the place where Cherubino already is, forcing the latter to move.

Two of the greatest missteps in the production concern the character of Cherubino, which is a shame because he is played extremely well by Hanna Hipp. However, to have him jiving as he sings ‘Voi che sapete che cosa è amor’ totally ruins the point that this is the one moment that reveals his more tender, sensitive side. In line with this, the Countess and Susanna ought to listen enraptured rather than join in his silly movements. In Act III, when he is disguised as a bridesmaid, it seems a mistake to have him appear apart from the other bridesmaids, in a dress stuffed with flowers, as the whole joke is that even when he is hidden among their number he stands out and catches the eye of the Countess.

The set rises for Act II, and if at first it seems lame for the same space to be used again the success of this decision soon becomes clear as the basic set-up is then embellished with a host of details that really bring the scene to life. Chief among them is a staircase that we see leading up to one of the four doors. This is the means whereby anyone can enter or exit the room, which prompts some strong co-ordination to ensure that everyone is in the right place at the right time to ascend or descend it. When it is pulled away we also have a strong visual reminder that those inside the room are trapped. Act IV, which takes place in a garden, is also well executed as the set is pushed to the back and the spacing of the characters across the fore, middle and background helps to highlight all of the intriguing encounters that take place in the dark.

The scene in which Figaro discovers that Marcellina and Doctor Bartolo are his mother and father is beautifully executed as all of the characters huddle together. Overall, however, the production seems less interested in the wider social context and hierarchies of the story than in simply generating its own dynamic. As the Count sings ‘Vedrò, mentr'io sospiro’ he opens the four doors to reveal all of the characters in various compromising positions with each other. It is questionable how much this fits with what the original opera is really about, and while it may be a commentary on contemporary impropriety, it is more easily appreciated as the dynamic that this production chooses to generate for its own sake.

Nevertheless, if we take the view that the opera is providing a commentary, it is surely on the subject of free love arising out of choice versus the old, brutish, non-consenting ways of the Count. In this way, all of the other characters subscribe to the new philosophy, which is possibly why the Count is left all alone at the end.

The performance styles of the principals work very well with the tone of the production so that Johnathan McCullough plays down the really thuggish, distasteful side of the Count a little so that the comic impact of him standing in the doorway brandishing an axe is perfect. Božidar Smiljanić has a fine bass-baritone and the right sense of blustery swagger as Figaro, while Louise Alder reveals a beautiful soprano as the thinking Susanna. There is also excellent rapport between her and the Countess of Elizabeth Watts, whose performances of ‘Porgi, amor’ and ‘Dove sono’ are spellbinding.

Rowan Pierce as Barbarina sings ‘L’ho perduta’ beautifully, really making the minor key that it is written in count, while Colin Judson and Clive Bayley play the parts of Don Basilio, Don Curzio (both Judson) and Antonio with a variety of accents and stammers. Marcellina and Doctor Bartolo are marvellously portrayed by the old hands Susan Bickley and Andrew Shore, and since Shore has played the same character in The Barber of Seville many times on this stage it is enjoyable to see him continue that role in the next part of the story. Kevin John Edusei’s conducting is good, and the result is a production that, although not entirely flawless, is certainly entertaining and highly worthwhile. Nardus Williams sings the Countess on 18 April, while Yvonne Howard plays Marcellina and James Henshaw conducts on 14, 16 and 18 April.

The Marriage of Figaro - English Nati... 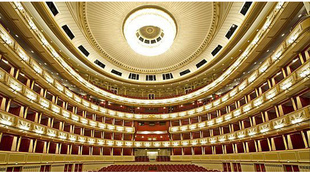 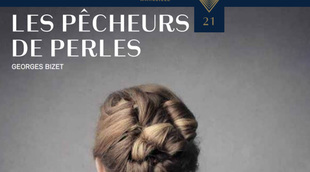