Turandot at the Bregenz Festival 2015 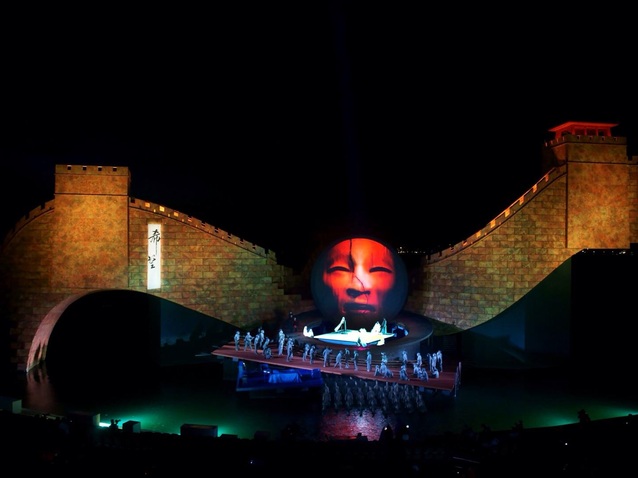 Bregenz is always a big spectacle. Everything seems to be gigantic for the 7000 visitors of the so called Seebühne, the biggest opera stage built on a vast platform on Lake Constance. The audience arrives from all over the world demonstrating the international reputation this festival has achieved in its long lasting existence for technically nearly perfect sound installations, spectacular stagedesign and a pittoresque setting along the lakeshore. After a hot summer day, some winds bring fresh air and some clouds dive the sky during sunset deeply red and in a most colorful dawn. A perfect fit to the vast copy of the Great Wall of China on stage.

Marco Arturo Marelli is responsible for this new production of Giacomo Puccini's last and unfinished opera, Turandot. There are plenty parallels between his life and his last composition. His fight against his cancer, which he finally lost, the female characters on stage and the wives, having played a particular role in his life. So the director tries to combine two stories in two sets on stage. His own design cleverly shows a little blue room, the cosy home of Giacomo Puccini with a piano, chair and bed adjacent to the vast square in front of the Chinese wall and the emperor's palace in Bejing. The singers can easily move between the two levels. So does in particular Arnold Rawls as Calaf dressed up as Giacomo Puccini.

The evening starts with a soundless introduction showing the composer in the inner conflict with his composition of the opera. We know that he was unsure till his death, how the finale of his last opera should look like. We see him playing with his music box, a present of the Italian consul in Bejing and actually delivering several themes to the opera. So he jumps up on to the big square and the opera begins with a huge bang and parts of the wall clash. The common people stream to the square. Impressive copies of the famous soldiers from Xian fill in the gap in the wall and enlarge the crowd. A soft and warm light design dips them into an orange color, matching with the evening sky. We follow the decapitation of the Persian Prince, who arrives in a boat and has to climb up high above the audience, on top of a 70 meter tower as part of the wall. Turandot arrives with a lampion-decorated boat and walks into the palace. Once Calaf lines up to solve the puzzles of the Princess to conquer her heart and fulfill his destiny, we get a look into the palace by lifting a round huge cover with a diameter of over 12 meters. The cover itsef becomes the screen for the most appealing video creation by Aron Kitzig. During the questioning he transmits impressions of faces, like in Greek tragedies symbolic for oracles. Once the puzzles solved, Chinese flavored dragon views accompany the celebrating crowd. Marco Marelli achieves a very colorful dense and compact interpretation of this opera without making it a monumental spectacle. It is still a touching opera and the music is central, even if we have sword dancers, shadow boxing or puppets on stage.

After some warming up Arnold Rawls develops to a warm lyric tenor, with some color in volume. His famous aria 'nessun dorma' is strong and safe to the end. Katrin Kapplusch is less persuading as Turandot. Her soprano has no difficulties in height, but lacks of drama and demonstration. Yitian Luan brings her soprano just right in time for her aria into form and let the heart of Turandot and the audience melt. Her play is stiff and clumsy. Joyful presentations by Dimitry Ivashchenko as Timur and Manuel von Senden as Altoum with their full voices create more athmosphere on the big stage. Thomas Oliemans, Peter Marsch and Kyungho Kim are entertaining Ping Pang and Pong.
Paolo Carignani guides the Vienna Symphonic orchestra and the Philharmonic Choir Prague with a lot of phantasy, he models beautiful romantic melodies into bright and harmonic cover, interpretating dramatic inner fights and sensible emotions. In this version we get the chance to hear A combination of Franco Alfano tries to complete the opera based on the composers sketches. An emotionally overwhelmed Turandot explores love and kisses the imprisoned Calaf to freedom to become her husband. A happy end, again another chance for some action on stage with Chinese flair, the expected firework is replaced by water fountains due to the danger of inflamed. But the audience is inflamed and acclaimes with excitement. Another bright summer evening and sold out performance comes to an end.