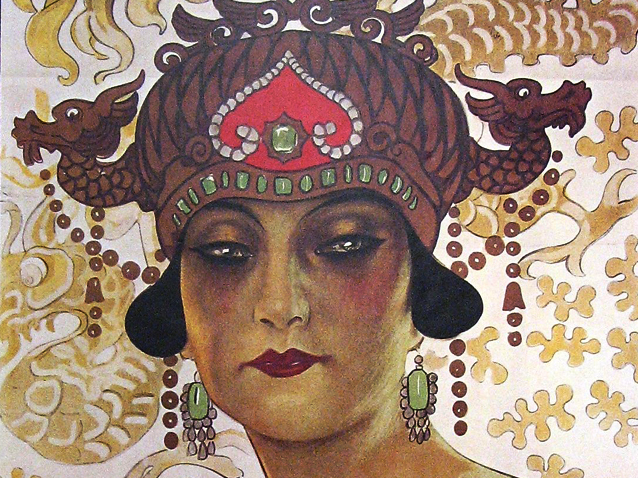 It was the staging of a play by Italian playwright Carlo Gozzi (1720-1806) that drew Puccini’s attention to the terrifying and captivating legend of the cruel princess “Turandotte.” This disturbing story had already inspired several works, the most important of which is the opera by Ferrucio Busoni (1917)). Fascinated in turn by the barbarian romanticism of a mysterious fable of love and death, Puccini began work on it in 1920. He carried through on his project despite exhausting episodes of doubt about his own creative skills. He closely oversaw the work of his librettists, whom he asked to find “something that will make the world cry.” That gave rise to the deeply moving character of Liù, the archetype of what has been called “the little Puccinian woman.” Liù, the young slave embodying love to the point of supreme sacrifice, condenses all the characteristics of these affecting heroines whose fragility and ingenuousness are the sign of unavoidable loss.  She is the last “sister” of Mimi in La Bohème and of the delicate and too-trusting Madame Butterfly. She makes a satisfying contrast with the cold and inflexible Turandot, immersed in her neurotic frigidity. As fate would have it, the poignant death of Liù, which is one of the first pages Puccini completed, will also be the last.  During his composing, having reached the pinnacle of the score for the little slave’s suicide, Toscanini stopped and declared to the audience: “It is here that Giacomo Puccini interrupted his work. Death, this time, was stronger than art.” On his deathbed, some sketches for the final duet were found; he had wanted to make it the equal of the second act of Wagner’s masterpiece, Tristan and Isolde (1865). The young Franco Alano was chosen to write an ending that would conform as closely as possible to Puccini’s indications. Turandot is a testamentary work that brings together in a sort of apotheosis all of the components of Puccini’s genius. The passionate pathos counterbalanced by comic asides, the intensity of an intimate drama tinged with then mysterious charm of the Orient, the haunting atmosphere of fantastic legends are all key elements in this monument of lyric art.  Puccini took the expressive possibilities of melody as high as they would go. His ambition was “to make, against everyone and everything, an opera of melody.” He succeeded fully. Who has never heard the famous “Nessun Dorma” that has served as a symbol of opera arias? Turandot, a spectacular work, requires a flock of characters capable of conveying this exceptional choral power. It also requires great voices and a sumptuous orchestra capable of producing the splendours of the Peking of a thousand years ago, where the Cruel Princess wields her despotic power.

In Peking, in the time of legends, each pretender to the hand of the beautiful Princess Turandot must answer three riddles, or die. Prince Calaf hides in the city of his enemies with his father Timur, deposed King of Tartary. The old, blind man is guided by a young slave, Liù, who has followed him into exile, out of love for his son. Liù and Timur try to dissuade Calaf, who is dazzled by Turandot’s beauty, from submitting in turn to the trial of the three riddles. Calaf finds the answers to the three questions asked by the cruel Turandot, but she begs her father to free her from this marriage she does not want. Calaf proposes a new challenge: he agrees to die if she can find out his name before dawn. In order to uncover the mysterious stranger’s name, Turandot does not hesitate to have Liù tortured; Liù then commits suicide in order not to reveal her lover’s name. Calaf offers his life to Turandot, revealing his name to her at the same time. Just as she declares to the assembled people that she finally knows the stranger’s name, the Princess proclaims: “His name is Love!” ».

The people of Peking await the execution of the Prince of Persia who has just failed to solve the three riddles that Princess Turandot presents to each of her suitors. Prince Calaf is hiding amidst the crowd. He finds his father, Timur, King of Tartary, dethroned by the Emperor of China (“O mio figlio!”).The blind king is accompanied by the young slave Liù, who has remained faithful in exile out of love for Calaf. She passionately loves the young prince because once, in his palace, he smiled at her. All three must remain incognito in order to survive in the city of their enemies. Calaf, bedazzled by Turandot’s beauty (“Si profuma, di lei l’oscurità”), decides to submit to the trial of the three riddles, despite the supplications of Timur and Liù (“Signore, ascolta”).

The three mandarins Ping, Pang and Pong lament China’s misfortune in the midst of decadence. They want their princess to find love at last so that the executions will stop (“Non v’è in Cina”). Trumpets announces the start of the ceremony of the riddles, presided over by eight sages (“Gravi, enormi ed impotenti”). The old Emperor Altoum regrets the cruel law that he allowed his daughter to establish (“Un giuramento atroce”). Turandot appears and explains why she decided to hold this bloody trial (“In questa Reggia”). By it she is avenging the death of a distant ancestor who was raped and killed by a stranger. Calaf finds the answer to the three riddles: hope, blood and Turandot. The crowd exults at his victory. Turandot begs her father to release her from her promise of marriage. Calaf wants to obtain her love, not her submission, and proposes a new challenge: that if she finds out his name before dawn, he will agree to be put to death (“Tre enigmi m’hai proposto”).

No one has the right to sleep in Peking. Everyone must try to find out the stranger’s name, but Calaf believes he will be victorious over the inflexible princess (“Nessun dorma”). Ping, Pang and Pong try to bribe the prince, who resists all temptations. But Timur and Liù, who were seen with Calaf, are arrested. To protect Timur, Liù claims to be the only one who knows the stranger’s name (“Il nome che cercate”). She withstands the torture, to the amazement of Turandot, who does not understand where she gets such courage (“Tanto amore segreto” – “Tu, che di gel sei cinta”). To keep from speaking, Liù finally snatches a soldier’s dagger and commits suicide. Calaf reproaches Turandot for her unbearable cruelty. He kisses her passionately, which overwhelms the insensitive princess. And he puts himself at her mercy by revealing his identity. In her moment of triumph, proclaiming the prince’s name to her father and the assembled people, Turandot announces: “I know the stranger’s name. His name is Love!” The crowd acclaims the embracing lovers.

Turandot at the Bregenz Festival 2015

Turandot at the Teatro alla Scala

Raffaele Mellace
Published on the 15 of May, 2015
See all columns