Thaïs at the Salzburg Festival 2016 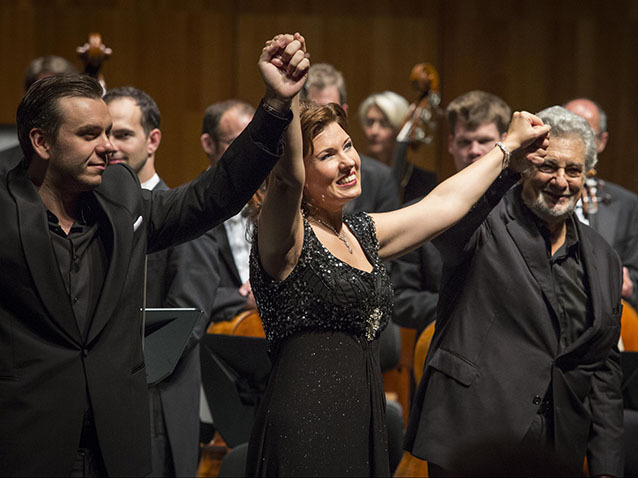 Jules Massenet is one of the great representative of the French Grande Opera. He has left a remarkable heritage of operas but only few have made it continously into the calendar of the opera theaters. Thaïs premiered in 1894 as one of the rarely staged masterpieces which makes it from time to time into concert halls in concert version. The composition was originally arranged for the Opera comique in Paris but was first shown in the Opera Garnier, where it had been performed the most so far.
Taking place in the Egyptian desert and the city of Alexandria, it is the oriental legend of Thaïs, a beautiful attractive young curtisan offering her love services to the rich upper class. Her extravagant lifestyle and overtopped lovelife is regarded with mischief by the population and especially by the Roman Church. Frater Athanael destines his life to convert Thais to abandon her orientation, to direct herself to asceticism and finally to become a nun. He is succeeding in his mission but in the same moment he falls in love and finds himself in conflict with the codex of his belief. All this happens in the most beautiful romantic music, soft and elegant in the typical French musical color. The oriental flavor, the flirting heat and warm winds of the desert are feelable as well as the exotic dances in contradiction to the pure religious life in a monastery.

Only the intermezzo in the second act has achieved popularity and is often played in concerts as the so called meditation of Thais with a solo violin. Its main theme remains present all over the evening and above that. The demand on the singers is exceptional. For soprano Marina Rebeka who shortly jumped in replacing Sonya Yoncheva in the title role, it was another chance to show her perfect technique and wide angle of her voice. Shriek and hysterical as the arrogant and unnatural courtesan, her Thais changes into a warm lyric and soft sister in her search for endless life. Placido Domingo was certainly the selling star of the evening. He still has his followers and he did not disappoint them. It is amazing how he extends his career by exploring new roles and characters. His aged voice lacks of flexibility, clearness and transparency, but still, has a the warm full timbre in the middle and a incomparable sound. His experience on stage and acting talent enriches the stageless evening. A perfect presentation by Benjamin Bernheim as Nicias, the lover of Thais, completes the main cast. His voice shows power, modulation and necessary lyrics and is a fresh young vis à vis. Members of the yearly young singers project of the Salzburg Festival show their talent in the smaller roles and let expect some new stars for the future.
Patrick Fournillier is an expert for the French repertoire and his conduct of the Munich Rundfunkorchester proves it. Very tender and cautious by tempi and volume, he unifies magically the voices and the instruments. He elaborates the musical images of the story and guides with exact signs the instrumentalists, and keeps an eye on the singers, including the Philharmonia Choir Vienna which has been very well prepared and integrates harmoniously.

At the end the audience is overwhelmed and jumps up from their seats for standing ovations filled with bravos and stamping feet. Their affection leads to a repetition of the Finale by Marina Rebeka and Placido Domingo, much to the joy of the assembled fans.