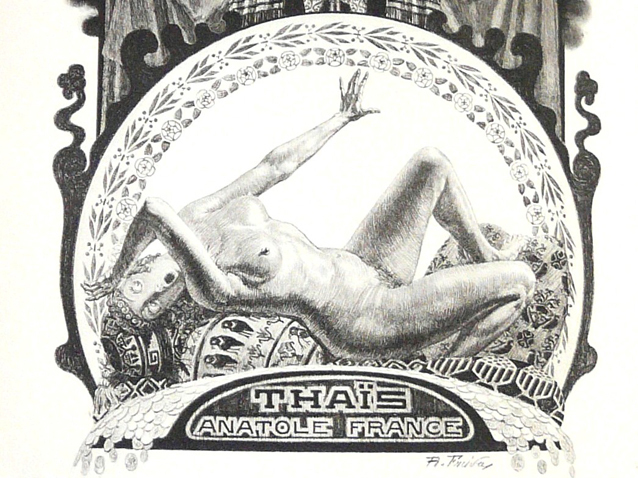 Everyone is familiar with the famous Méditation that Massenet assigned to the solo violin in Thaïs, an opera sometimes judged too harshly when in  fact it is one of the masterpieces of French lyric art. The libretto was inspired by an anti-clerical novel by Anatole France in which a monk loses his faith when he tries to convert a courtesan, with whom he falls in love. Thaïs enters a convent and Athanaël understands, albeit too late, the true nature of his passionate feelings. Massenet’s work is characterised by a mixture of sensuality and Sulpician religiosity that underscores a dramatic structure based on opposites: the city and the desert, eroticism and saintliness, seduction and renunciation. These contrasts are achieved through different musical processes, like the unusual confrontation between the soprano, Thaïs, and the baritone, Athanaël, that is unique in the composer’s creations. The essential orchestral pages ensure the cohesion of each act by suggesting dreams, meditations or atmospheres. The symphonist’s art reaches its culmination in Thaïs, where Massenet excels at rendering life in a desert monastery or the sumptuousness of a festival in Alexandria with Oriental shadings. The title role was written for the great Sybil Sanderson, the composer’s favourite singer. When it premiered, the work aroused intense debate: critics did not appreciate the subject matter, deemed too steamy for the morals of the day, or the score, despite its seductive power.  In 1898, Massenet presented a reworked version of Thaïs that established itself as the definitive version.

The action takes place in Egypt at the end of the 4th century. Athanaël, a Cenobite monk, decides to save the city of Alexandria from the corruption and sin that are symbolised by the scandalous behaviour of a courtesan, Thaïs. Athanaël confides in his friend Nicias, a young playboy-philosopher, and Thaïs’s former lover. Nicias and the young woman make fun of the monk’s pretensions, but once she is alone, Thaïs meditates on the vanity of her life and decides to follow Athanaël to make amends. She sets fire to her house and allows herself to be taken to Albine’s convent. When Thaïs, now converted, enters the holy order, Athanaël understands too late that he burns with carnal passion for the former courtesan. There is no time left to hear the words of love for the woman who is dying, sanctified, under the eyes of Athanaël, who is overcome with pain.

The monk Athanaël, deeply affected by the lustful mores that reign in Alexandria, declares to his Cenobite brothers that he is determined to bring the courtesan Thaïs back to God. He leaves the banks of the Nile to see his friend Nicias, Thaïs’s former lover. From the terrace of his luxurious home, he contemplates with distaste the city of Alexandria: “Voilà donc la terrible cité”.
Nicias mocks his desire to convert Thaïs. When the young woman arrives surrounded by admirers, she tries to seduce the monk, provocatively asking him to come see her to try and save her soul.

Alone in her palace, Thaïs asks her mirror: “Dis-moi que je suis belle”. Athanaël tries to convince her to give up a life dominated by pleasure, but she resists and rejects him. He gives her time to think about it, promising her that he will wait until dawn in front of her home. That is when the famous “Méditation” for violin begins. Thaïs ends up joining him and asking him to help her find salvation. In the light of the flames ravaging her former palace, she leaves with Athanaël for Albine’s monastery, after donning a simple woollen frock.

Athanaël and Thaïs arrive at Albine’s monastery. The troubled monk turns the young woman, now transfigured by her sudden conversion, over to the convent’s White Girls. Then Athanaël re-joins his comrades on the banks of the Nile, but he is constantly tormented by the searing memory of the lovely Thaïs. She appears to him in a dream in which she is provocatively offered up to his desires. When he imagines her dying, he decides to go to her . Upon his arrival at the convent, Thaïs, touched by his grace, dies as in the premonitory dream. She no longer hears Athanaël who, crushed by pain, cries out his love for her in vain.

Thaïs at the Salzburg Festival 2016

Helmut Pitsch
Published on the 19 of August, 2016
See all columns