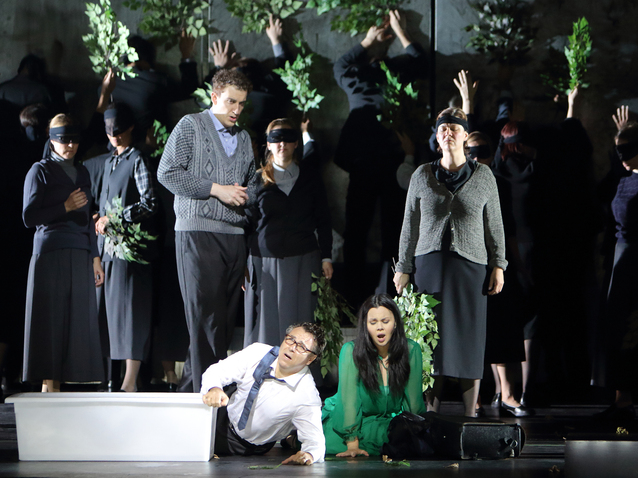 It is still a rare possibility to assist to this opera, even if it was once a big success in the whole Europe after its world premiere in Paris 1835. The subject of this Grande Opera seems more than actual and modern again. It demonstrates the fight between religions, prosecution and religious discrimination, linked with the fate of two strong competing men opposed and confronted by fatal love, faith power and a virtuous girl. 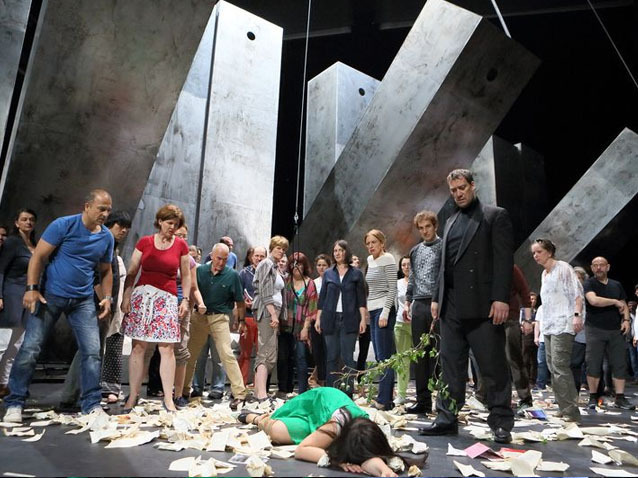 It is a dark story with a tragic end : dark and tragic is the whole setting of the evening directed by the Catalan director Calixto Beito, the stage being cleverly designed by Rebecca Ringst. A monumental turnable wall composed by several metal blocks moveable individually dominates the whole stage throughout the evening, looking like the Berlin wall or the Jewish wailing wall. Once, it is a political barrier between Christians and Jewish, as well as a social one between ordinary people and the ruling class in the time of the Concil of Constance, and finally, the merciless prison of the last act. Enriched by the sumptuous lightdesign of Michael Bauer and the video-installations by Sarah Derendinger, the whole ambience is very touching, even depressing, as the whole plot is.

The Jewish juweler Eleazar prosecuted for his belief and the Cardinal Brogni are the two opponents. Brogni had exiled Eleazar from Rome and condemned his sons to death. Eleazar has saved Brogni's daughter out of Brogni's burning house, the later not being aware of it. The daughter now called Rachel was brought up in Jewish belief. By destiny she falls in love with Prince Leopold, himself calling a Jew named Samuel. Once the fraudulent disguise is uncovered Eleazar, Rachel and Leopold are condemned to death. Whereas the strong feelings of love bring Rachel to save the life of his lover by withdrawing her accusation. The possibility of saving their own lives by denying their belief is rejected by Eleazar. In the moment after their execution, Eleazar lifts his secret of Rachels descendance to the Cardinal.

The composition of Fromental Halevy, himself being Jewish, is full of melodramatic scenes with warm romantic sound and colorful instrumentation. The Overture is a monumental organ choral, credits from Jewish and German folk songs make the music again light and transparent, several choir scenes bring the necessary life on stage. French conductor Bertrand de Billy awakes the hidden treasures of the partiture with sensitiveness and respect, the orchestra of the Bavarian State Opera following him alert.

Roberto Alagna has taken over the part of Eleazar and after a shy start, finds his access to this demanding role. His tenor shows some fading in height but some volume too, the presence and the timbre of his voice is present and persuading. Ain Anger inspires the role of Cardinal Brogni impressively with his warm and full bass. The performance of Aleksandra Kurzak is just amazing. Originally booked for the second female role of Princess Eudoxie, she swapped to the part of Rachel after the decline of Kristina Opolais. Her Rachel is real, her affection for her father and her lover moving, her despair and her emotional conflict oppressive, and all is expressed in a dry, flexible and vibrant soprano. The young German Soprano Vera Lotte Böcker jumped into the part of Princess Euxodie and takes well her chance. Elegant in her appearence, she twists her voice between unbeatable love and consumptive jealousy. John Osborn is a safe but colorless Leopold.

The German audience is well aroused by their own history and emotionally imbalanced, thus showing in a very heartful applause for everybody after some moments of reflexion.

La Juive, a new production at the Bayerische Staatsoper, Munich, from June 26th to July 8th.