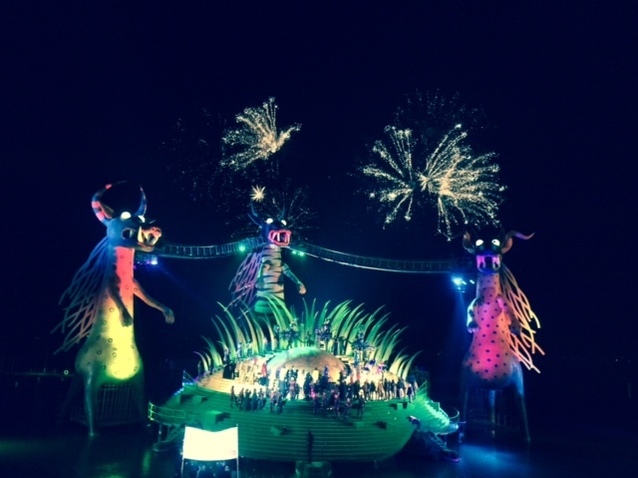 The city of Bregenz has a pittoresque setting between the seashore of Lake Konstanz and the softly growing Alps. This natural beauty is part of the ambiance of  the traditional open air festival. The festival has grown in importance and reputation over the last years. The Seebuehne as the major location has been extended for up to 7000 spectators, a festival hall has been built and the offered spectacles have gained on quality and diversity. Contemporary music has its fixed position next to monumental spectacles of classical opera hits on open air. This year is the last season of artisitc director David Pountney, who has heavily influenced the position, programme and image of the festival. His Magic Flute is a present and deep honoration to the festival. A real masterpiece of direction and particular stage design by Johan Engels. Three huge statues symbolizing the watch dogs of Sarastro dominate over the action on stage. Hanging bridges in between them offer opportunities for some impressive actions done by a special stunts company. Wild soldiers gliding down to fight for good or evil. But who is what in this performance. This time Sarastro is not the incarnation of good and holyness. He is fighting as the queen of the mighty night for power, influence and wealth. So Tamino and Pamina are the real symbol of love, truth, confidence and fidelity. Rainer Trost has a fine Mozart tenor and finds himself comfortable with the technical setting as well as the pouring rain accompanying the performance. Anja Nina Bahrmann is a naiv lost little girl in between the fronts. Her voice is colourless and somewhat to small for big open air spectacles. Markus Brueck is a fine comic Papageno. His witty comments are fresh and spontaneous, his play entertaning. Hanna Herfurtner is a good looking Papapena in form of a yellow cheer leader, but not really cheering up. Young Texan Laura Claycomb is  a poisonous, dramatic queen of the night and her appearence is impressing, lifted up by hydrolic power over the audience.

The Vienese Symphonic orchestra under the conductor Hartmut Keil celebrate a fine, fresh, dynamic Mozart. Even the evening is dominated by visual effects music remains central and key. The dreadful rain stops as soon as the spectacle finishes giving a clear sky for the firework as a great final of this year´s festival. The audience is well remunerated for their passion and efforts to remain quietly seated during the rain, with a high quality musical performance and artistic direction.