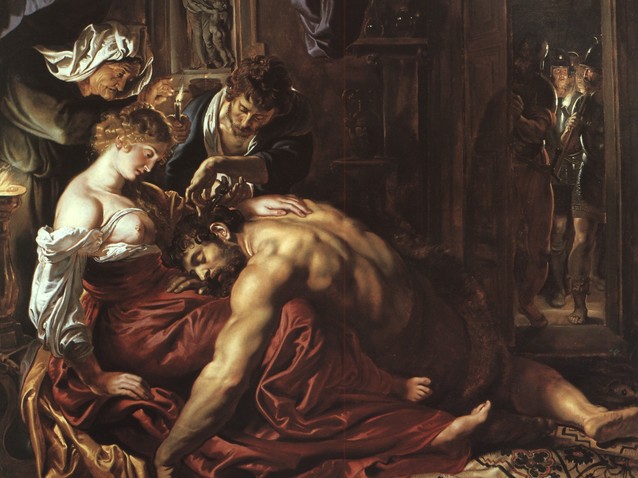 Held prisoner by the Philistines, the Hebrews implore the God of Israel. Samson, the valiant hero, kills Abimélech and encourages his followers to rebel against the Philistines. The people of Israel then break their chains and manage to flee - under the vicious threats of the High Priest of Dagon, who swears vengeance. He meets the voluptuous Dalila, who is determined to seduce Samson, so that she can discover the secret of his strength – for the sole purpose of avenging her people. In a duet brimming with lyricism, Dalila wins over the heart of the hero who, despite the warnings of an elderly Hebrew man, succumbs to her love… and to the trap laid by the woman: he has just revealed that his hair is the source of his strength when Samson is arrested, his hair shorn and his eyes poked out. In prison, begging forgiveness for his weakness, he prays for the liberation of his people. Then, touched by faith, he suddenly regains his strength at a Philistine dance and manages to bring their temple crashing down; Dalila and her people are destroyed.

Together with Faust and Carmen, Samson and Dalila remains the most popular opera in the French repertory. Some 130 years after its premiere, it still creates the same murky magic and exudes a voluptuousness that the Holy Scriptures would certainly reproach! The Holy Scriptures? They provided the theme for this opera, which was composed to a prose piece by Ferdinand Lemaire taken from a chapter of the Book of Judges. Camille Saint-Saëns displays his talents as a virtuoso mosaicist: the noble spirituality of the subject shifts here towards the grand oratorios of the past; here, monumental frescos come to life, revisiting Gounod and Meyerbeer, while everywhere else there is an almost Wagnerian sensuality floating about, that wild and seductive something associated with Dalila. In a sequence of ideally merged scenes, religion and seduction add up to an irresistible alchemy.

Subjugated and tyrannised by the Philistines, the Hebrews implore the God of Israel. As the satrap Abimélech spews his hatred at them, the valiant Samson kills him, then calls on his brothers, urging them to revolt.
With the Hebrews having been freed by Samson, the Philistines need to find a way out of their defeat. As the High Priest of Dagon once again curses Israel, his best weapon may be a woman, the flamboyant Dalila who wants to seduce Samson…

An elderly Hebrew warns Samson against Dalila’s substantial charms. In fact Dalila dreams only of punishing Samson, who rejected her initially: the High Priest of Dagon joins Dalila and stirs up her thirst for vengeance. Does she want gold for seducing Samson ? Not at all! Her desire for revenge is all she needs.
Now it is Samson’s turn to go back to Dalila. Touched by the young woman, Samson gradually allows himself to be charmed by her spells. A passionate duet reunites them, during which Samson gives in to Dalila. But his imprudence causes him to confide in her the secret of his strength, which lies in his hair. Fatal admission: Dalila instantly betrays him by cutting off his hair and letting the Philistines carry him off.

With his hair cut and eyes gouged out, Samson has been made prisoner. Chained to a millstone in a jail in Gaza, he prays to the God of Israel: his life in exchange for the release of his people. His prayers are heard: taken to an orgiastic festival thrown by the Philistines, Samson suddenly regains his strength and brings down the pillars of the temple. Dalila, the High Priest of Dagon and their people are annihilated. 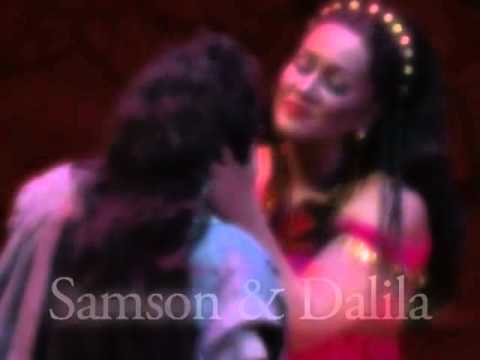 Samson et Dalila is a Production of Two Halves at the Royal Opera House, Covent Garden