> Home > Encyclopera > I due Foscari 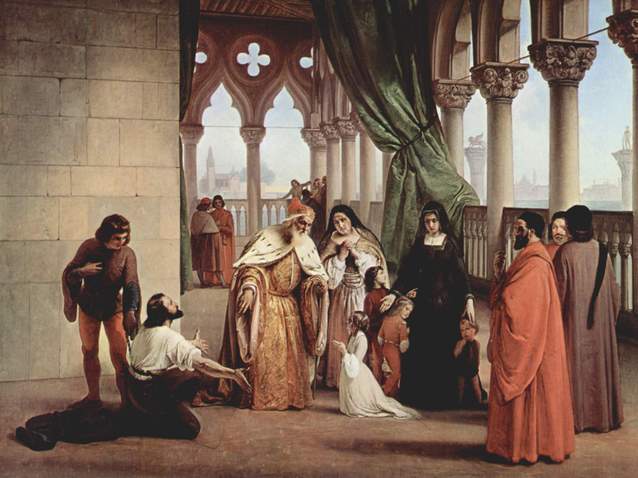 Composed during the summer of 1844, I Due Foscari belongs to that famous period of intense work that Verdi called his “difficult years”, ten years that saw the creation of sixteen operas. After the dazzling success of Nabucco in 1842, every opera director was clamouring for a work from the Maestro, who had finally won over the public. For his debut in Rome, Verdi returned to a project he had first envisioned for Venice but then abandoned in favour of Ernani. Lord Byron’s The Two Foscari, in which Verdi saw a “lovely subject, sensitive and moving”, offered up such a cruel portrait of the famous Venetian doges that it was better to save it for the Romans! Turning again to Piave, the librettist of Ernani, the composer, as was his wont, took an active part in adapting this political and family drama blending vengeance and great patriotic fervour, spirit of sacrifice and loves thwarted by the State. The work met with success, then was gradually eclipsed by the popularity of other great works by Verdi until it was revived in the 1960s, associated mainly with the magnificent role of Francesco Foscari, doge of Venice, that attracted the greatest baritones, starting with the famous Piero Cappucilli, and more recently Leo Nucci. And yet the charm of I Due Foscari, which Verdi himself deemed rather uniform in its sadness, is not limited to the astonishing beauty of the baritone and tenor roles. The orchestral richness and the dramatic intensity of the choirs are immediately seductive. The use of instrumental themes to characterise the characters is used by Verdi for the first time, creating an atmosphere of intimate melancholy that contributes to tightening the boundaries of this poignant struggle between State interests and feelings that presage the heartbreak of Simon Boccanegra.

Summary
Jacopo Foscari, son of the doge of Venice Francesco Foscari, is to be judged by the Council of Ten for a crime of which he claims to be innocent. A sworn enemy of the Foscari family, the vindictive Jacopo Loredano, traitorously manages to get him sentenced to exile. Despite the pleading of Lucrezia, Jacopo’s wife, the unfortunate father is forced to sign the decree banishing his son, even though convinced of his innocence. The young man dies of despair just before the real murderer is revealed. Loredano ensures Francesco Foscari’s removal from office; Foscari collapses, lifeless.

In 1457, in Venice, Jacopo, son of Doge Francesco Foscari, is sentenced by the Council of Ten for a murder he did not commit. Condemned to exile, he knows he is the victim of a plot carried out by Jacopo Loredano, a wretched pretender to the throne currently occupied by his father, Francesco Foscari. But his father is pondering this power, the reality of which is illusory. Quite rightly, Lucrezia Contarini, Jacopo Foscari’s wife, is revolted by the obvious injustice of his sentence. She cannot understand why his father, although convinced of his innocence, does not intercede in his son’s behalf.

Alone in prison, Jacopo laments and raves. Lucrezia encourages him to keep hope. His father comes to say goodbye. Loredano, who considers both Foscaris responsible for the death of his father and uncle, joins them to savour his vengeance. Before the Council, he states his desire to see the sentence carried out as quickly as possible and objects firmly to Lucrezia and his children accompanying Jacopo into exile.

As a regatta is celebrated by the delighted people of Venice in St Mark’s Square, Jacopo must say goodbye to Lucrezia.  The Doge learns too late that the real murderer has confessed on his deathbed. The unjustly sentenced Jacopo has already died from grief as he was boarding the boat that was to take him far from Venice. The Council of Ten now demands that the father step down; he rebels, resists and finally gives in. The bells of St Mark’s ring out to celebrate his successor’s election. Francesco Foscari collapses and dies.  The unyielding Loredano notes in his diary: “I have been paid.”

Ilana Walder-Biesanz
Published on the 15 of August, 2017
See all columns