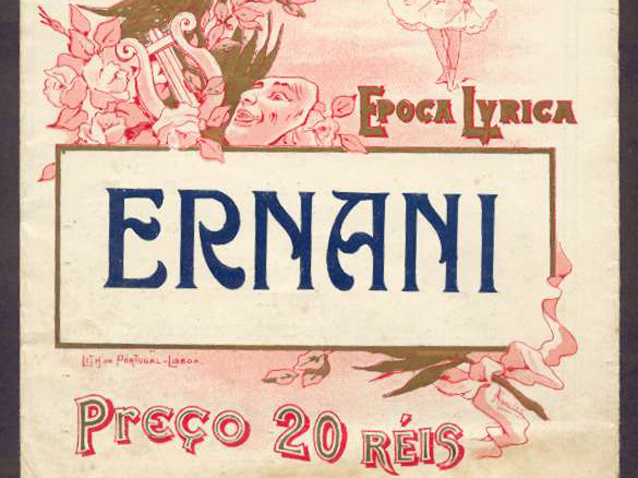 On the evening of 9 March 1844, two years to the day after the formidable success of Nabucco at La Scala, which really started Verdi’s career, Venetians enthusiastically welcomed the first opera the Maestro had created for La Fenice. The triumph of Ernani, whose lovely arias were being hummed even before the premiere, firmly established Verdi’s position as he was setting out on what he called his “years in the galley”. From then on he had to compose ceaselessly, one or two works a year, in order to meet the requests from opera directors. The public was clamouring for Verdi, still and always. After his great portraits Nabucco and I Lombardi, the composer was looking for a libretto that would be equally grandiose but different, for which he wanted: “a lot of fire, tremendous action and conciseness.” He finally chose Hernani, the Victor Hugo drama that in 1830 had led to a famous “battle” between the classics and the romantics under the wainscoting of the Comédie-Française. For this initial incursion into the world of Hugo, the libretto was written in close collaboration with the young Francesco Maria Piava, who became the Maestro’s best partner for ten of his operas. Constantly struggling against the Austrian censors who were very active in Venice, Verdi built his work around the measure of his music, which took priority over everything. The extraordinary melodic inventiveness, the ardent rhythms and dramatic colours of the orchestration contribute to the power of this flamboyant opera that plays out with the excitement and panache of a cloak-and-sabre novel. The plot revolves around a woman, Elvira, a fragile heroine, coveted by three men: Ernani, a passionate romantic tenor; Carlo, king of Spain, a baritone with ambiguous and disenchanted accents; and Silva, bass, the abusive uncle. These three archetypical male voices, which will appear in later works as well, are combined here to produce the greatest dramatic effect. Verdi himself designed the final trio reuniting Elvira, Ernani and Silva as the starting point for new formal research that would lead to Don Carlo.

The action takes place in Spain in 1519. After the murder of his father, Don Juan of Aragon has become Ernani, leader of a troop of mountain rebels. Outlawed and pursued by the emissaries of Don Carlo, King of Castile, he loves and is loved by Elvira, but their love is impossible, as she is to wed an older relative, Ruy Gomez de Silva. The girl is also faced with the advances of Don Carlo, who is to become emperor under the name of Charles V. Ernani decides to kidnap his beloved just as Don Carlo is revealing his love to her. The three protagonists are surprised by Silva, who must bow before his king, whilst Ernani is able to flee. But the young man returns to Silva’s castle on the day of his wedding to Elvira. Silva, faithful to the laws of hospitality, refuses to turn over his outlaw rival to Don Carlo, who takes Elvira with him as a pledge of Silva’s loyalty. Ernani then enters into a pact with Silva: they will fight the king to save Elvira’s honour, then, as soon as the old man decides, he will sound his horn, which he entrusts to him to indicate to Ernani when it is time to die. Carlo, now Emperor Charles V, grants clemency to the conspirators and allows Ernani and Elvira to wed.  But the sound of the horn rings out in the midst of the rejoicing. Silva, unyielding, demands what he is owed: the life of Ernani, who keeps his word by stabbing himself as the rejoicing old man looks on.

The Bandit. Don Juan of Aragon, outlawed and pursued, becomes the bandit Ernani. He and his men plan to go and carry off the one who shares his love, Elvira, to save her from an odious marriage to old Silva. In her apartments, Elvira laments: “Ernani, Ernani, involami….” Don Carlo, King of Castile, presents himself to the young woman and declares his love for her. Ernani joins them. As the two rivals face off, they are surprised by Silva, who must bow before the king and agree to let Ernani go.

The Guest. Elvira, who has been deceived by the announcement of Ernani’s death, prepares to wed Silva. But the young man shows up disguised as a pilgrim. He becomes the guest of Silva, who protects and hides him as required by the honour of a Spanish Grandee. When Don Carlo demands that he again be banished, the old man refuses despite the king’s fury, with the king turning against him and taking Elvira away as hostage. After Don Carlo leaves, Ernani refuses a duel with Silva, to whom he proposes a pact: he swears to agree to die as soon as Silva gives him the signal, by sounding a horn he gives him, so long as they can join forces against the king in order to save Elvira.

Clemency. Don Carlo, now Emperor Charles V, meditating before Charlemagne’s tomb in the cathedral of Aix-la-Chapelle. He gives himself over to sombre thoughts in “O de’verdi anni miei”. He hears conspirators approaching. “Si redesti il Leon di Castiglia.” Ernani has been chosen to kill the new emperor, who ultimately chooses to pardon him, touched by Elvira’s pleading. He will even allow the two young people finally reunited to marry.

The Mask. The wedding festivities are ominously interrupted by the sound of the horn echoing three times, signifying to the unfortunate Ernani that it is time to fulfil his dark vow. He pleads with the inflexible Silva: “Solingo, errante misero.” Elvira’s prayers are equally unsuccessful. At the end of a great trio, Ernani, faithful to his sense of honour, stabs himself as Silva looks on, implacable, while Elvira collapses, destroyed by grief.

Helmut Pitsch
Published on the 04 of September, 2015

Thibault Courtois
Published on the 04 of April, 2015
See all columns