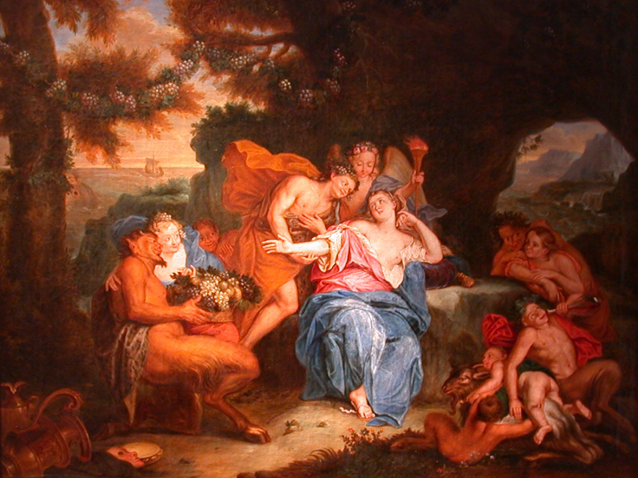 In a letter written in 1924, Hugo von Hofmannsthal mentions Ariadne auf Naxos, calling it: “our favourite child.” The work was originally conceived as a brief divertissement to complement the staging of Molière’s Bourgeois Gentilhomme for which Richard Strauss had composed stage music “in the manner of” Lully. The debut in Stuttgart in 1911 did not meet with success. The audience did not appreciate the unusual combination of a Molière play adapted by Hofmannsthal with an opera on the oft-used theme of Ariadne abandoned by Theseus on the island of Naxos. Strauss and Hofmannsthal had to completely rethink their project; after a lively gestation period, they turned it into one of the high points of their collaboration. The definitive version created in 1916 replaced the Molière play with a prologue in which the character of the Composer dominates; this is one of the finest roles conceived by Strauss, in the line of Octavian in Der Rosenkavalier (1911). The “theatre in the theatre” perspective is a forerunner of the games of mirrors and theoretical examination of opera creation which were fleshed out ion Capricio (1942). We are watching the rehearsal of an “opera seria,” Ariadne, that is to be staged in the private theatre of a wealth Viennese burgher. In order not to risk boring the audience invited to this performance, he decides that a commedia dell’arte-style comedic interlude will be presented. The mise en abyme process, which consists of showing the creation of an opera within an opera, enabled Richard Strauss to practice an art in which he excelled, that of neoclassical pastiche. However, the score remains astonishingly modern, as evidenced by the use of the “conversation in music.” The art of parody runs through this very sophisticated work, in which Hofmannsthal ideally presents the serious and the comic side by side. But he also saw an opportunity to explore one of his favourite themes: metamorphosis. The work appears as an initiation rite for the protagonists. Thus the Composer changes when he comes in contact with the realistic and vivacious Zerbinetta, a coloratura soprano of dazzling virtuosity. And Bacchus, won over by love, exclaims: “Now I am other than the one I was,” in reply to Ariadne, who wonders: “What is this part of me that I am giving up?”  In his Letter on Ariadne, Hofmannsthal wrote: “He who wishes to live must surpass himself, metamorphose, forget. And yet, persist, not forget, be faithful – that is what every man’s dignity means.” Ariadne auf Naxos brilliantly carries along this fundamental contradiction, between pastiche and modernity, laughter and seriousness, play and reality.

In the 18th century, at the home of Vienna’s richest man, the music master is dismayed to learn that the “opera seria” Ariadne auf Naxos, composed by his pupil as the evening’s main entertainment, will be followed by a comedic interlude! The Composer is even more disoriented when he learns that the host, in order to gain time, wants everything to be presented as one performance. Despite the Composer’s protests, the opera unfolds amidst the wacky performances of the commedia dell’arte characters led by the lively and daring Zerbinetta.

At the home of a Viennese arts patron, a sort of bourgeois gentleman, two troops are preparing and rehearsing the show that each is about to give. Commedia dell’arte for Zerbinetta (treble-soprano) and her companions, lyric drama for the Composer (soprano) and his singers. To shorten the evening and allow the fireworks to be shot off on time, the host, represented by his Majordomo (spoken role), demands that the two works be presented simultaneously. Consternation and indignation on the Composer’s part; needing the money, he resolves to give in, after having sung lovingly about the grandeur of music, the most sacred of arts. Under pressure from the Music Master (baritone) and the Ballet Master (tenor), the Composer, yielding to Zerbinetta’s charms, agrees to transform his opera. However, he summons up his determination and, furious, flees, unable to bear such an outrage. The opera can begin.

Naiad, Dryad and Echo (soprano, contralto, soprano), three nymphs, feel compassion for the unhappiness of Ariadne (soprano), who is sleeping near a grotto on a desert island. Awakened from her sleep, she laments her fate, abandoned by her beloved Theseus. As she aspires to join the realm of the dead, the actors Harlequin (baritone), Scaramouche (tenor), Truffaldino (bass) and Brighella (tenor) come to entertain and console her, and Zerbinetta hopes to persuade her that love will come again. Bacchus arrives, whom Ariadne sees first as the long-awaited harbinger of death, with Zerbinetta’s tender and laughing approval.

Xavier Pujol
Published on the 26 of September, 2021

Helmut Pitsch
Published on the 28 of October, 2015
See all columns