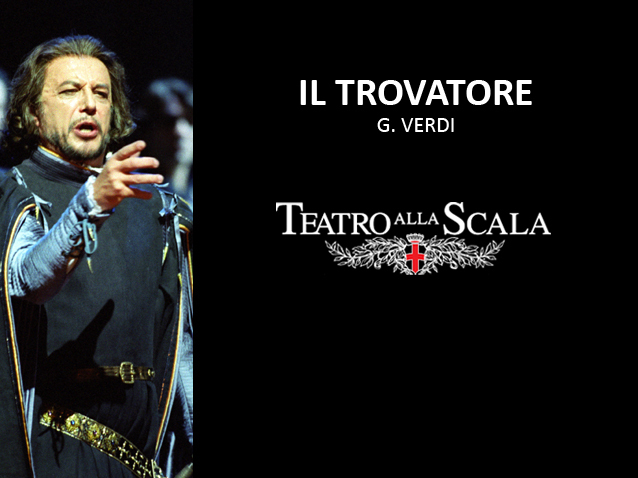 This was the most popular opera in Verdi’s times, thanks to that irrational and instinctive tension which never lets up. Chivalrous spirit, primitive feelings, short-tempered tone. A major Spanish drama of honour, indignation and fundamentalist passion. But it is also a nocturnal and lunar opera, in which the driving symbology is fire: of blazes and hatred. In a libretto which cannot be recounted, the protagonist – a romantic hero who is unlucky in war and lucky in love – personifies the Troubador’s values of courtly love. Love and hate are intertwined: Manrico loves Leonora and hates the Count; the Count loves Leonora and hates Manrico; Azucena loves Manrico and hates the Count. But the desire for revenge is so pronounced in Azucena, that she kills the only being she loves and is in turn loved by. The opera-dilemma of maternal love and filial love is presented in the classical staging production directed by Hugo De Ana, last seen in 2001, for the centenary of Verdi’s death. Protagonists: one of the greatest Italian voices, soprano Maria Agresta, who obtained an extraordinary success in last Season’s Oberto conte di San Bonifacio; alongside her will be the acclaimed Argentinian tenor Marcelo Álvarez, and a true Italian legend, baritone Leo Nucci. It is conducted by Daniele Rustioni, a talented young man whose popularity is on the rise.