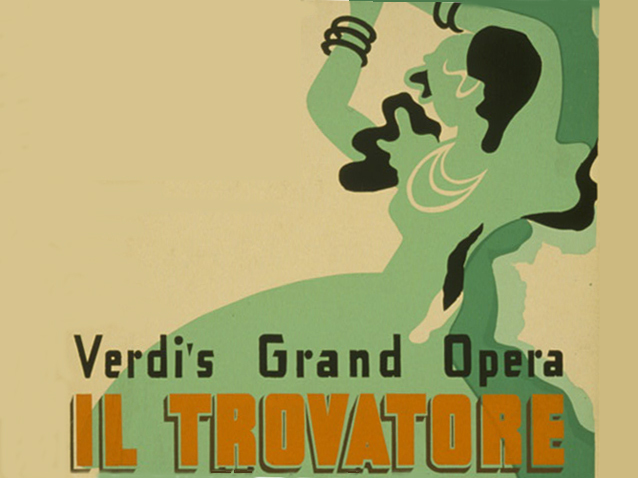 As the second opera in his “popular trilogy”, after Rigoletto and before La Traviata, Il Trovatore remains a work of outrageousness and excess. Its profusion of words, abundance of feelings and inner conflicts, its multitude of well-known arias and melodies make this an almost universal drama.
It is also a masterpiece of incredible romanticism and infinite complexity; the libretto overflows with improbabilities and contradictions.
Yet there is no break in the sequence of situations, no stiffness in the involvement of numerous characters who come and go during the piece.
Anecdotally, it is reported that Caruso believed that it was enough to bring together the four best singers in the world in order to achieve an extraordinary Trovatore.

The setting is northern Spain and Aragon in the 15th century, against a backdrop of civil war.
Jealousy and hatred have blinded count di Luna, pushing him unwittingly and out of vengeance to kill his own brother.

Count di Luna (baritone), in love with Leonora (soprano), is jealous of a troubadour who sings at night in the palace's gardens to seduce his beloved.
Ferrando (bass), the count’s officer, reminds his soldiers of the terrible story of a gypsy woman who died on the gallows many years earlier, wrongly accused of having cast a spell on the newborn younger brother of the count.
Azucena, the gypsy girl’s daughter, steals the newborn out of vengeance. In a fit of madness, she tossed her own baby into the fire, then disappeared with the count’s child, whom she raised as her own son.
In the palace garden, Leonora confesses to Ines (soprano), her lady-in-waiting, that she loves the unknown man who serenades her each night.
Count di Luna enters, mad with desire, when suddenly the poet’s singing rises out of the darkness. Leonora runs to throw herself into his arms but finds herself face to face with the Count. The minstrel then appears in the guise of Manrico (tenor), head of the rebel forces. The furious count provokes him to a duel.

Despite his victory, Manrico has let the Count live.
At the foot of a mountain, Azucena, gripped by visions of horrors, describes to her son Manrico the tragedy she experienced in the past, the gallows where her grandmother died, the vengeful kidnapping of the count’s son and the fatal mistake that caused her to throw her own son into the flames.  Manrico then asks about his parentage, but Azucena quickly reassures him. He then learns from one of his companions that Leonora, believing him dead, has taken the veil; he leaves immediately and kidnaps her from under the Count’s nose.

The Count bemoans his lost love, while Azucena, searching for her son, is arrested. Her old crime revealed, she is condemned to die.
While he prepares for marriage, Manrico learns of his mother’s fate and hurries to save her.

Manrico, defeated, is taken prisoner.
After swearing her love to Manrico and in order to obtain his freedom, Leonora offers herself to the Count, after first swallowing a delayed-action poison to deceive him and escape.
She joins her beloved and dies in his arms.
Di Luna then orders Manrico to be executed immediately under the gaze of Azucena, who then proclaims that her mother is avenged: the Count has just killed his own son. 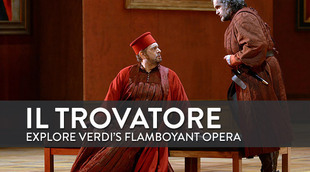 Il Trovatore: A Song of Night, Fire and Vengeance

The Salzburg Festival plays Verdi’s Il Trovatore. A dark and flamboyant, complex and convoluted work being known to require the “four most beautiful voices in the world”. In order to complete this demanding challe…

Il Trovatore at the Liceu: The best was the bad guy

Sam Smith
Published on the 30 of January, 2017
See all columns