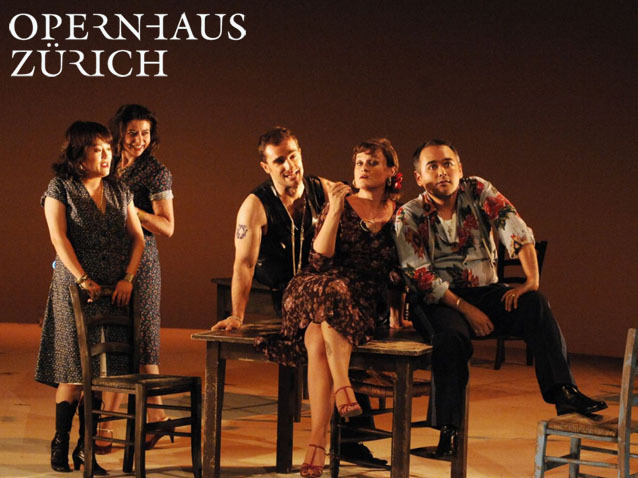 She has long since become a legend: Carmen, the gypsy girl who ultimately pays for her love of freedom with her life. At the première in Paris in 1875, the audience’s reaction was reserved, indeed shocked at this self-confident woman, whose actions were in stark contradiction with the social mores and values of the time. Aggressively sensual, Carmen takes a stand that is beyond bourgeois morals. Yet only the première in Vienna was to usher in the work’s triumphant progress, which remains unbroken to this day. Matthias Hartmann’s successful production recounts the tragic story without any folkloristic clichés. In the brightest sunlight, the archaic world of the smugglers and gypsies clashes with the corrupt world of the police, and the drama between Carmen and the sergeant Don José, who is obsessed by her, reaches its inevitable climax. Mezzo-soprano Christine Rice will be débuting as a promising Carmen at Zurich Opera; the young Mexican tenor Arturo Chacón-Cruz will perform the role of Don José, and the Moscow-born bass Alexander Vinogradov that of Escamillo. The musical direction will be in the hands of Cornelius Meister, who celebrated a great success with our Magic Flute last season.