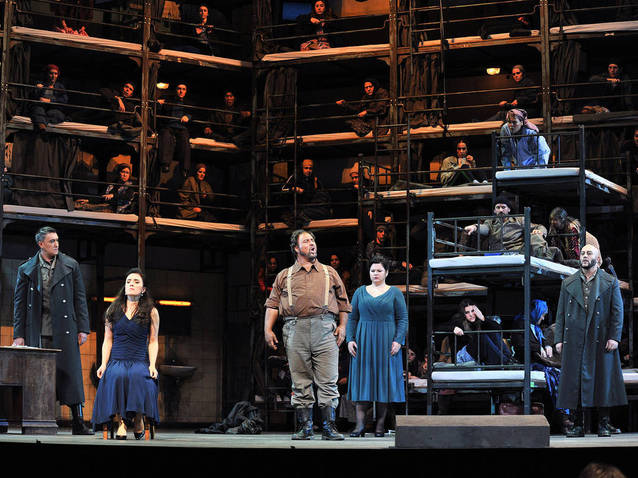 Bad singing and worse staging. Otello, Verdi’s masterpiece with a libretto by Arrigo Boito – another masterpiece – and based on Shakespeare’s masterpiece, sank clumsily in its return to Liceu’s stage, after 10 years of absence. It isn’t easy to ruin three masterpieces, but in this occasion it was achieved.

Locating the opera in a refugee camp, besides resulting awkwardly fashionable, alters seriously the relationship and the balance between the characters, perverts the original dramatic conflicts and forces the text up to the extent of incoherence. Nothing is gained and a lot is lost.

Visually, this production coming from the Deutsche Oper Berlin and signed by Andreas Kriegenburg as stage director and by Harald Thor in the scenography, has a powerful initial impact with its seven levels of bunk beds where the refugees (the choir) heap up. However, soon enough this scenic disposition reveals its serious acoustic and dramatic limitations. Firstly, it sprays the sound of the choir, whose members are singing from the back of the stage, unable to hear one another. Also, it ruins the dramatic power of the intimate and secret scenes of the monstrous manipulation that Jago exerts over the other characters. Otello, although it needs a big choir, dramatically speaking is not a choral or collective opera but one of individual characters, pure Shakespeare, which this staging distorts.

Musically, the result was of a very low level. The cast reached the stage into pieces due to cancellations: the two initially planned Otello (Aleksandrs Antonenko and Stuart Neill) were replaced by José Cura in the first cast and Carl Tanner and Marc Heller in the following ones. Of the two planned Desdemona, the first cancelled as well and the second, the Albanese Ermonela Jaho, took the place, while Maria Katzavara took the second space.

José Cura has been strangling Desdemonas for a lot of years, perhaps too many. The last ones at the Liceu 10 years ago were already strangled by him. His voice has perhaps never been that of a “di forza” tenor, which the role requires, but it still preserves the “squillo” on the high notes. However, it has become opaque and frail in the middle register. The phrasing, of a verista style at times, was running too freely, cut off from what the others were singing and from what the orchestra was bringing, which in a few occasions didn’t fit tempo wise.

Marco Vratogna is not a good Jago. He articulates very well, and he is always understood, but he continuously shouts and barely uses the mezza voce. The staging also favoured the replacement of the refined and evil fundamental nature of the role (one of the few chemically pure evil characters of the repertoire) by a rude nastiness.

Ermonela Jaho sang Desdemona well. Her lyrical voice, with little presence in the lower register and limited dramatic range, suffered in the confrontations with Otello, but constituted a perfect vehicle for her big final scene.

Amongst the remaining characters Vicenç Esteve Madrid stood out as Roderigo and Oleya Petrova as Emilia. Very poor, unacceptable, Alexey Dolgov as Cassio.

The choir, forced to sing in very uncomfortable conditions, remained correct, with the occasional tendency towards an unpleasant grating sound.

The orchestra remained together but without special character, it wasn’t by far the worst element of the night. The conductor, Philippe Auguin, debutant at Liceu was ok, but didn’t manage to raise a performance that ended with some disheartened courtesy applause and with a few irate catcalls.