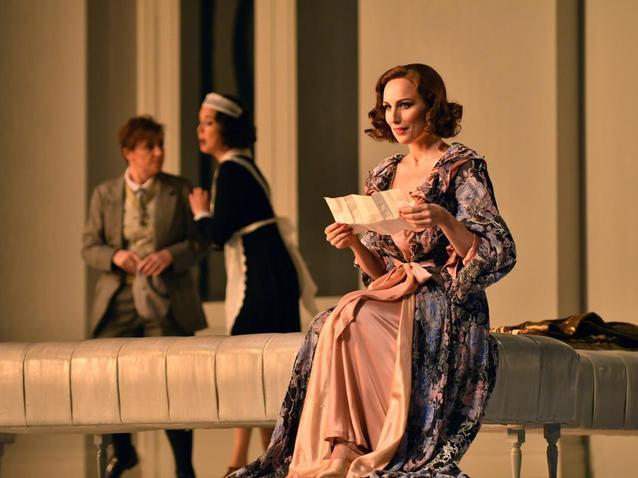 Olga Mykytenko’s indisposition during the last rehearsals was the reason for Anett Fritsch’s debut at Liceu as Almaviva Countess. The young German soprano (1986) triumphed at Salzburg in 2015 with the same role and will soon be debuting at La Scala as Donna Elvira.

Anett Fritsch possesses all the attributes for a great Countess: the most beautiful voice, good style, scenic presence and a sensual elegance that adds very interesting nuances to the character. Her “Dove sono”, very well accompanied by the orchestra, sounded moving, as it should. She was the star performer in an opening night that globally showed a good vocal level. 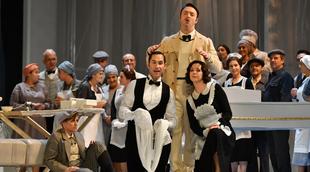 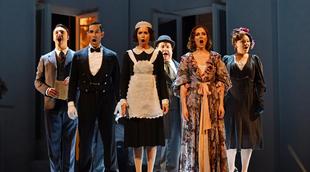 The North American baritone Kyle Ketelsen, who had already sung Figaro in this very production in 2008, was again correct, adequate, with good style and voice, but still slightly under the high expectations that this great Mozartian character raises. A similar case was that of the Hungarian baritone Gyula Orendt, debuting at Liceu, who – following the indications of the stage direction – gave a sophisticatedly hypocrite, cocky and lecherous Almaviva Count. The voice, however, occasionally lacked the required force and presence of the role.

Anna Bonitatibus, also debuting at Liceu, performed a very good Cherubino, a role that she masters. Her “Non so più” was excellent but, instead, her “Voi che sapete” was a little heavy on improperly added ornaments.

The German rising star, Mojca Erdmann, had raised great expectations in her debut at Liceu. Her Susanna started literally inaudible in her first duo with Figaro, but she then started gaining strength, confidence and presence throughout the performance and ended well in all aspects, but not memorable in any.

Maria Riccarda Wesseling was a good level Marcellina and Rocío Martinez an enchanting Barbarina. Valerio Lanchas presented a vocally good Bartolo that was reduced to the caricature by the stage direction.

The orchestra, in the hands of Josep Pons, the principal conductor of the house, was good, with delicious woods and balanced strings. The tempi, generally light but softly slowed down for the emotionally transcendent episodes, were adequate. The problem came with the lack of togetherness between voices and orchestra – lack of rehearsals? The entries of the voices, especially in the concertanti were not exact, and this happened at the beginning, in the tricky ending of the second act and at the end of the opera.

The production by Lluís Pasqual as stage director, and this time re-staged by Leo Castaldi, was the same that we saw at Liceu in 2008 and 2012. It’s a light production, set in the 30s of the 20th century that works well in the first acts but that is badly resolved in the last one, which becomes scenically incomprehensible. The production takes on the character, tone and lightness of a vaudeville and, although it gives some right hints of the serious underlying human drama that nourishes Le Nozze di Figaro, too often stays at the surface and doesn’t manage to transcend the vaudeville.

As with all Lluís Pasqual’s productions, this one is of an absolute professionalism. However, whilst being perfectly presentable, it doesn’t count amongst his best works and it doesn’t seem like re-staging it for a second time after its opening 8 years ago was a great idea. 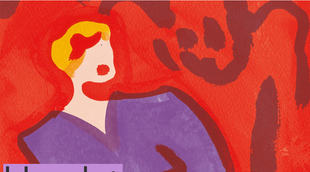