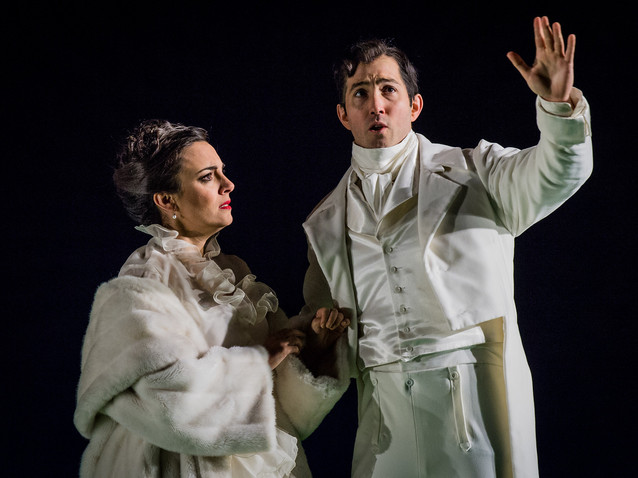 A Midsummer Night’s Dream of 1960 is Benjamin Britten’s operatic take on Shakespeare’s eponymous play. It follows the original story reasonably closely, although it focuses on certain aspects of the plot and downgrades the prominence of others.

Robert Carsen’s classic production for English National Opera premiered in 1995. A new version by Christopher Alden was actually introduced in 2011, but Carsen’s was so impossible to keep down that it now returns to the London Coliseum for the first time in fourteen years. The secret to its success derives from the fact that it finds an aesthetic that works seamlessly with Britten’s own approach. The composer downgrades the importance of Athens, and instead focuses the vast majority of the action on the time the characters spend in the woods, away from society’s prying eyes. He therefore emphasises the dream-like aspects of the story, as does Carsen in his colourful and aesthetically pleasing staging. 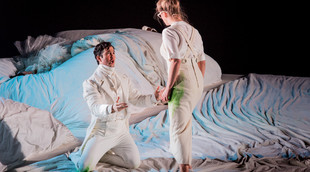 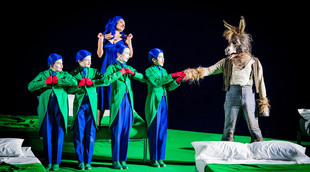 In Michael Levine’s visually arresting set, an enormous green sheet covers a sloping stage and initially seems to represent nothing more than grass. The Fairies soon roll it back, however, to reveal that it is also a blanket on a giant bed, from which Puck emerges. If the bed emphasises the notion of a dream at the start, it continues to do so by being a recurring motif, with its own Surreal qualities, throughout the evening. When Hermia and Lysander first want to sleep both lie down on its pillows, with each being large enough to take them. In Act II this enormous bed is replaced with several smaller ones. This provides an excellent infrastructure for the scenes in which Tytania woos Bottom, and Lysander and Demetrius pursue Helena to the consternation of her and Hermia. Not only does the chasing and arguing take place on and all around them, but at its end Puck must place each of the four sleepy lovers in the correctly positioned bed so that they wake up staring at the right person.

In Act III a trio of beds have joined the realms of the clouds by being suspended above the stage. They do descend, but halfway through the act rise again only now with the green sheet that they stood on hooked to them so that it ascends as well. As it does so the shape it creates hints at the curtains on a proscenium stage. It thus sets the tone for the play we are about to see performed by the rustics, while the act of lifting everything out of the way ensures that they have a large space upon which to move. With the removal of the sheet green gives way to white as the set’s dominant colour, emphasising the move back from nature to society in Athens. The performance of the play itself is amusing, and executed well by the cast. The dynamic of this and various other routines across the evening, originally choreographed by Matthew Bourne and now revived by Daisy May Kemp, also has a strong bearing on the success of the evening.

Alexander Soddy conducts extremely well, achieving the right underlying balances to the sound that then enable it to feel so dreamlike. The Trinity Boys Choir are exceptionally well drilled as the Chorus of Fairies, while from among the principals the standout performance comes from Soraya Mafi as Tytania. The manner in which she throws herself so completely into her wooing of Joshua Bloom’s Bottom is matched only by the detail in her expressions, and the beauty of her soprano. Bloom himself has a tremendous bass and remembers to play the part entirely straight from the character’s point of view. His weaver reveals a certain affability, but also a great confidence in his own abilities as an actor as he shows an inclination to hog rehearsals. He also heads a team of rustics, which includes Graeme Danby, Simon Butteriss, Timothy Robinson, Robert Murray and Jonathan Lemalu, that is highly polished all round.

In the non-singing role of Puck, Miltos Yerolemou demonstrates quite brilliant acrobatics as he falls off the stage in a manner in which any Tosca would be proud, while Eleanor Dennis also stands out for her portrayal of Helena. She only, however, heads a quartet of lovers, also comprising Clare Presland as Hermia, David Webb as Lysander and Matthew Durkan as Demetrius, who all demonstrate strong voices and an excellent ensemble dynamic. Christopher Ainslie has an intriguing countertenor as Oberon, while Andri Björn Róbertsson and Emma Carrington play the parts of Theseus and Hippolyta respectively to the full.