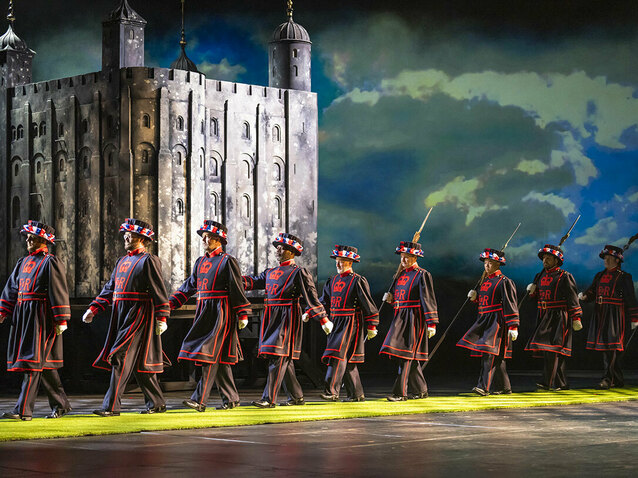 The Yeomen of the Guard of 1888 is one of Gilbert and Sullivan’s richest and darkest operettas. Set in the Tower of London in the sixteenth century, it sees one Colonel Fairfax face execution. The charge of sorcery, however, was the doing of his uncle who stands to inherit his estate if he dies unmarried. Fairfax plans to thwart his relative by marrying in the final hour of his life, and asks his friend Sir Richard Cholmondeley to find a suitable bride who will receive a large dowry for her efforts. Sir Richard enlists the young singer Elsie Maynard, and while her fellow entertainer, the jester Jack Point, wishes to marry her himself, he consents because she will be free again as soon as he is dead. At the same time, the Yeoman Sergeant Meryll and his daughter Phoebe, who loves Fairfax herself, hatch their own plan to free him from the tower and disguise him as Meryll’s son Leonard. When Fairfax does escape from his cell, however, the problems only begin because it means Elsie is not free as she thought she would be and that Jack Point is unable to marry her. 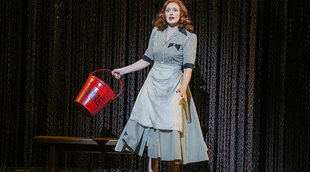 ENO 2022, The Yeomen of the Guard, Heather Lowe © Tristram Kenton

All of Gilbert and Sullivan’s creations are parodies of traditional literary and theatrical devices, as they include a villain who is the cleverest one in the piece and a fickle chorus that always agrees with the last person who spoke. The Yeomen of the Guard is no exception because when Jack Point hears of Elsie’s misfortune and sings ‘Oh, woe is me, I rather think!’ he parallels Arveragus in Chaucer’s The Franklin’s Tale who tells Dorigen to do the honourable thing, but shows little regard for her own distress proclaiming ‘As I best may, I will my woe endure’. If the pair’s works are parodies to begin with, however, then Yeomen is a parody of a parody because it satirises all of their own conventions. Normally, all of the final couples that form are happy with the exception of one that has been thrust together by circumstances, whereas here all of the pairings, except one, are the product of blackmail. Unusually, it begins not with a mass chorus, but with a single woman on stage in a move that was still seen as revolutionary over half a century later when Oklahoma! did the same. Above all, and uniquely among the duo’s creations, it sees one character who ends up alone seemingly die of a broken heart.

Jo Davies in her new production for English National Opera updates the action to the 1950s. Thus, tying in with the era of the Cambridge Spy Ring, Fairfax is accused of espionage rather than sorcery, while the Overture is accompanied by a Pathé newsreel that paints a picture of the era while also highlighting the rather contemporary issue of train strikes. All of Jack Point and Elsie’s proposed entertainments are similarly updated so that the sarabande and Jumping Joan become the twist and bunny hop. All this is successful because the 1950s are still recent enough to retain a certain air of familiarity and hence relatability, yet still represent a period where many of the values and hierarchies that were at play in the original setting would have been retained. Even more interesting is the fact that advancing the action by four hundred years in some respects makes little difference. This is because the Yeomen already felt like a permanent fixture in the sixteenth century so all of the operetta’s suggestions that they are in the autumn of their lives, and by implication out of date and out of touch, feel just as relevant in one setting as the other. 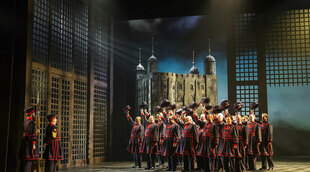 ENO 2022, The Yeomen of the Guard, ensemble © Tristram Kenton

Anthony Ward’s sets are effective although the rooms in Act I with latticed walls and hanging chains, while justified by the plot, make the atmosphere feel a little more sterile than it might otherwise be. In this respect, things take off after the interval when a revolving Tower of London at the centre of the stage really captures the sense of distraught people searching for the prisoner in the dead of night. The production is dynamic from the start as the Overture reveals the response to the fire in the Beauchamp Tower to which Dame Carruthers subsequently refers, but some decisions remain questionable. Several dancing Beefeaters are introduced, but having two of them perform even quite a timid routine during Fairfax’s ‘Is life a boon?’ undermines its impact by trivialising what should be a poignant meditation on life and death. Conversely, Phoebe’s ‘Were I thy bride’, in which she seduces the gaoler Wilfred Shadbolt so her father can steal the key to Fairfax’s cell, feels too tame. It successfully includes Phoebe repeatedly gesturing to Sergeant Meryll as to the key’s whereabouts while she distracts Shadbolt, but the song needs to be taken so far that the final push-off of ‘I’m not thy bride’ comes as a real jolt because it feels in such stark contrast to what has preceded it.

Some of the choices of music prove sounder than others. Although there is an historical justification for it, the omission of Shadbolt’s ‘When jealous torments rack my soul’ seems a shame because John Molloy is so good in the part, asserting his bass to excellent effect and making the character less overtly oafish, and far more likeable and engaging, than is usual. Neal Davies, with his tremendous bass-baritone, is equally strong as Sergeant Meryll, but this still does not explain why he is given the solo that is normally reserved for another Yeoman in ‘Tower warders, under orders’. It can hardly be because no one else is up to the task because the Four Yeomen who are heard elsewhere - Adam Sullivan, Paul Sheehan, John Colyn Gyeantey and Robert Winslade Anderson - sound extremely good. Meryll and Dame Carruthers’s duet ‘Rapture, rapture’ is cut in favour of the ‘Matter Trio’ from Ruddigore. This is great fun as the rewritten words enable the characters to claim that even singing something from a different operetta doesn’t matter, but it is hard to see how it is an improvement on the original duet, which is so fabulous in its own right and usually rounds off the pair’s scene in such tremendous style. 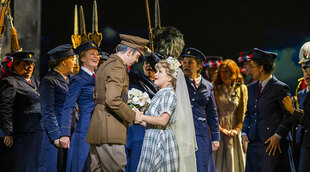 Chris Hopkins’s conducting is superb, while there are some notably strong performances from the cast. Alexandra Oomens is a particularly impressive Elsie with her gorgeous soprano really flourishing before us, while, as Fairfax, Anthony Gregory brings sufficient power and immense sensitivity to the deceptively challenging solos ‘Is life a boon?’ and ‘Free from his fetters grim’. Heather Lowe delivers some beautiful singing as Phoebe, Steven Page is suitably noble and upstanding as Sir Richard Cholmondeley while Gaynor Keeble, replacing Susan Bickley as Dame Carruthers on the night I attended, captures the character’s haughtiness and commanding presence alongside her loneliness and vulnerability. Innocent Masuku is an effective Leonard Meryll while, as Kate, Isabelle Peters plays her part to the full in the quartet ‘Strange adventure’.

Jack Point is played by Associate Artist of the Royal Shakespeare Company, Richard McCabe. It can work for the part to be handed to an actor as opposed to an opera singer, but it does feel as if his delivery in ‘The Merryman and his Maid’ lacks something of the musical grandeur (which has little to do with how well the notes are strictly delivered) required for the song to really flow. As the evening progresses, however, it becomes clear that McCabe’s approach to the part is quite deliberate, and it proves to be highly effective. Alongside substituting a line about jokes being imported from France with an anachronistic dig at Brexit, he delivers the close of ‘Oh! a private buffoon is a light-hearted loon’ with a level of rage and despair that goes far beyond what is normally witnessed in the piece. Then he plays the ending not as the ultimate Romantic demise of the love-lorn loon, but in a very gritty and real way. It, paradoxically perhaps, makes for as sorrowful and moving an ending to the operetta as is one is ever likely to witness, and it only serves to emphasise the importance of English National Opera to London’s cultural life.

The Yeomen of the Guard - English Nat...