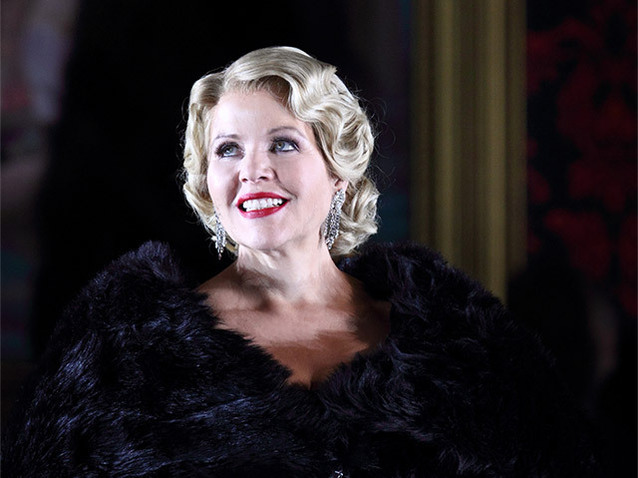 Like Rossini’s Il barbiere di Siviglia and Donizetti’s Don Pasquale, Richard Strauss’ Der Rosenkavalier is the story of an ageing man attempting to put himself between two young lovers. In addition, it features an older woman who is also capable of standing in the way of the couple, but who honourably chooses not to do so. Princess Marie Thérèse von Werdenberg, known as the Marschallin, enjoys a relationship with Octavian, despite the fact that she is married and he is considerably younger than her. When the Marschallin’s grotesque cousin Baron Ochs asks her to suggest a candidate to present the young Sophie von Faninal with a silver rose, which signifies Ochs’ proposal of marriage to her, she suggests Octavian, who he does not know is the Marschallin’s lover. When Octavian does so, however, Sophie immediately falls in love with him. As Baron Ochs proceeds to prove just how rude and crass he is, Sophie resolves not to marry him and she and Octavian hatch a plan to expose his lecherous ways. After it succeeds, the path seems clear for the pair to be happy, but Octavian and the Marschallin still have feelings for each other. She, however, recognises the way of the world and releases him so that young love can flourish. 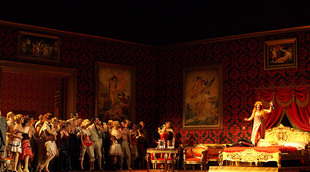 While Der Rosenkavalier is in many ways a comedy, it contains many profound elements including the Marschallin’s recognition of her own mortality. She fully appreciates that, much as Octavian says he loves her now, he will eventually leave her for someone younger, and that there is nothing she ever could, or should, do to prevent this. The piece thus requires a director who is capable of exploring all of the opera’s facets, and Robert Carsen proves an excellent choice. Even judged solely on his recent work for the Royal Opera, he has proved himself to be incredibly thoughtful and flexible as he has tackled the comical Falstaff and tragically moving Dialogues des Carmélites with equal success.

In Der Rosenkavalier Carsen introduces new slants on issues and characters without ever undermining the opera’s themes, or the way in which the music is set up to tell us the emotion. He sets the action in 1911, when the opera premiered, so that the First World War is just around the corner. Cannons and other military reminders lie all around, while Baron Ochs is presented as an old school general and his servants as soldiers. All this signifies the shaking of former certainties, which can be related to the Marschallin having to confront her own changing position.

The staging, while being visually arresting, also says a lot in its own right. In Act I the Marschallin’s bedroom is highly sumptuous and reveals a huge bed, diagonal walls and a series of rooms beyond so that there is, quite literally, a servant behind every door. When we see hoards of footmen traipse on and off at every turn, and multitudinous people petitioning the Marschallin with their own causes, we realise that she is not her own person. The world she knows may be on the verge of collapse, but at this precise moment things have reached a point where everything is overblown to the extent that the Marschallin has enormous responsibility towards others even as her own power wanes. 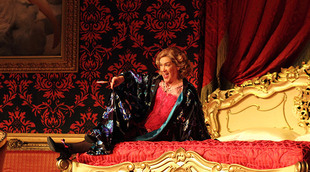 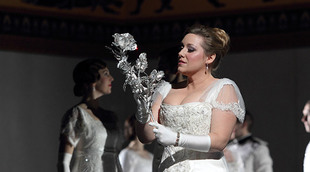 An enormous set can often do performers a disservice by dwarfing them, but here it only emphasises how much the Marschallin’s environment controls her rather than the other way around. Carsen is clever enough to begin Act I in an antechamber at the front of the stage before opening up the full set, so that in the first few moments we can focus entirely on the figures of the Marschallin and Octavian. Things are helped by having the respective parts played by Renée Fleming and Alice Coote, two performers who are more than capable of projecting their characters across a large space. There is a real sense that, although the pair enjoy a sexual relationship, they also appreciate each other’s company and companionship, which is reflected in the fact that they seem relatively equal in the relationship. Coote’s Octavian is not an infatuated youngster who is practically ‘star-struck’ by the Marschallin, but rather has his own set of needs and can be uppity when things do not go exactly as he wishes. Coote displays the most mesmerising mezzo-soprano with her lower and upper registers proving equally strong, assertive and nuanced. Fleming also plays the Marschallin extremely sensitively. She shapes her soprano brilliantly to suggest a character whose sorrow is entirely genuine, and does not merely represent the rants of a person used to getting her own way in life.

Act II set in the von Faninal house presents a tasteful area dominated by black and white, a Greek relief and modern looking furniture. This suggests that, unlike the Marschallin whose family goes back centuries, the wealthy von Faninal family is part of a new rising class that, judging from the cannons that stand around, has made its money from armaments. Sophie is played by Sophie Bevan who reveals an impeccably sweet tone as she displays a full soprano that phrases lines to perfection. Baron Ochs is played by Matthew Rose whose strong bass proves extremely effective in the part, and who achieves an excellent balance between flair and restraint. When he appears in Act II and shows himself to be rude and crass, he does not begin with quite as exaggerated gestures as some, which leaves plenty of scope for him to build things up and to appear menacing as opposed to merely comical. That both he and his servants are dressed in military uniform also makes the waltz that they dance feel disconcerting and almost sinister.

The production really goes to town on the duping of Ochs in Act III, but the trio ‘Marie Theres’! Hab’ mir’s gelobt’, in which the Marschallin gives way to allow Octavian to be with Sophie, is especially moving as the three adopt formations throughout that mirror the diagonals of the set, and the waning and growing relationships that are being played out. Carsen also pitches the ending perfectly by doing nothing to undermine the love that Octavian and Sophie are shown to share, while still leaving us aware of the darker context in which they exist that makes them right to wonder if their future together is merely a dream. Andris Nelsons’ conducting is excellent, with the brilliance of the orchestral playing also contributing to the success of the evening.

This is a co-production between the Royal Opera (where Rachel Willis-Sørensen and Anna Stéphany play the Marschallin and Octavian for three performances over the run), New York’s Metropolitan Opera, Turin’s Teatro Regio and Buenos Aires’ Teatro Colón. As a result, even if a trip to London is not possible, there will be other opportunities to experience the piece in 2017. In particular, when the production goes to the Metropolitan Opera it will be broadcast live to cinemas on 13 May 2017, making it accessible to a great many people around the world.